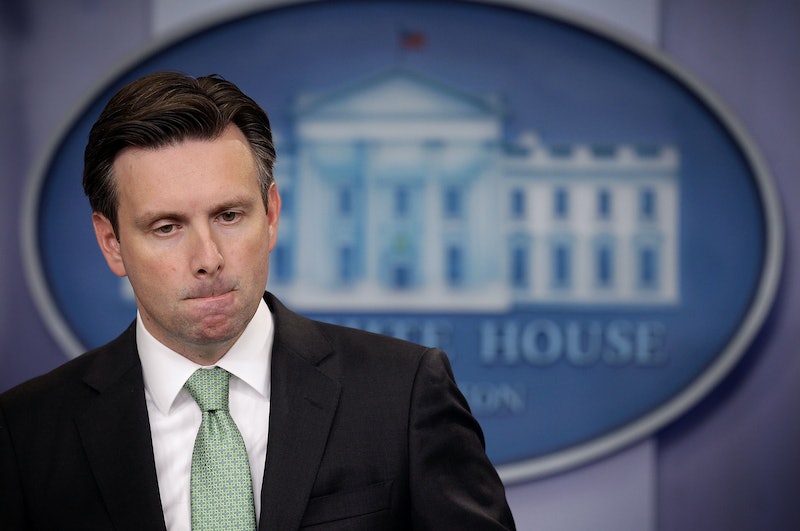 Though details are still continuing to emerge about the devastating shooting that took place at Umpqua Community College in Oregon, the White House has already responded. Press Secretary Josh Earnest was informed of the UCC shooting while giving his daily press briefing Thursday afternoon, shortly after news of the shooting broke. Earnest's comments were brief, though he immediately took the opportunity to stress the Obama administration's deep concern over the growing need for gun control in the country — an issue that he says is not making any headway due to bipartisan bickering. Update: Douglas County Sheriff John Hanlin confirmed the number of fatalities at 10, including the shooter, and the number of injuries at seven. The shooter was identified by the New York Times as Chris Harper Mercer on Thursday night. Update: The victims' names were released Friday night: Lucero Alcaraz, 19; Treven Taylor Anspach, 20; Rebecka Ann Carnes, 18; Quinn Glen Cooper, 18;Kim Saltmarsh Dietz, 59; Lucas Eibel, 18; Jason Dale Johnson, 33;Lawrence Levine, 67 (assistant professor); Sarena Dawn Moore, 44.

"We've not yet seen that kind of strong bipartisan support across the country translate into legislative support in the United States Congress that's sufficient to pass legislation that would, again, implement these kinds of common-sense solutions," Earnest told reporters.

Earnest's words echo those of President Obama, who said in June at the U.S. Conference of Mayors that the entire country needs "a change in attitude" about the gun control issue. These remarks came in the wake of the church shooting in Charleston, S.C., in which nine churchgoers were shot dead 21-year-old suspect Dylann Roof.

Though the official death toll at UCC is still not immediately known — the latest reports say that 13 have been confirmed dead — multiple reports say that at least 20 bystanders have been injured. Those numbers, if accurate, would make this the deadliest shooting in the U.S. since the one at Sandy Hook in 2012, which claimed the lives of 26 people, including 20 children. As for the details emerging from the UCC campus, they have been particularly difficult to read and hear — especially those flooding in from first-person accounts.

Meanwhile, several politicians in Washington. D.C. have already tweeted messages of both shock and sadness over the shooting, including presidential hopefuls Jeb Bush and Bernie Sanders.

Though President Obama has yet to issue an official statement, a telling tweet from his official Twitter account earlier in the day did reiterate his feelings on the matter of gun control, and what he feels needs to happen sooner, rather than later.