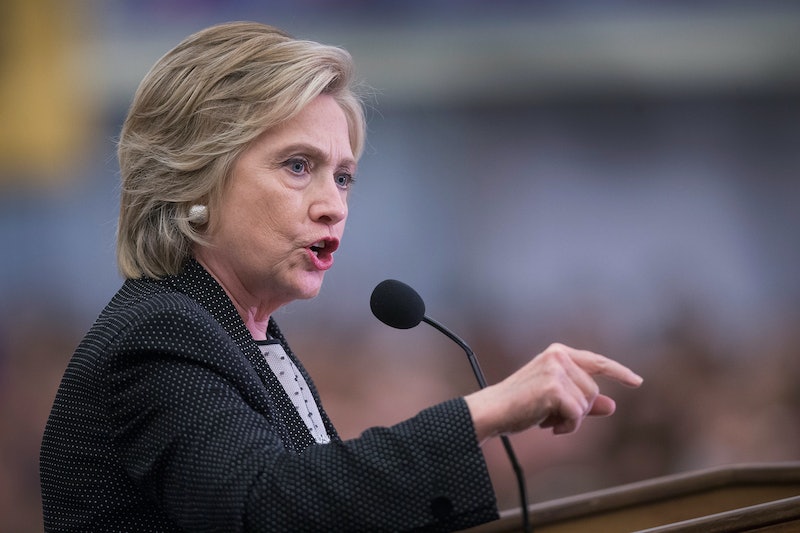 Like clockwork, when there is a mass shooting in America, the news begins lamenting the tragedy, someone asks how it could have been prevented, and Hillary Clinton speaks up about gun control. It's become one of her main talking points, and one of the few issues that she has never strayed from during her long political career. In the upcoming 2016 election, Clinton is setting herself up to the most vocal candidate on gun control — and she's staking her campaign on it.

Following the shooting at Umpqua Community College in Oregon Thursday, many of the 2016 presidential candidates took to social media to express their condolences and urge people to pray for the victims' families. Clinton did as well, but she took is a step further, using the opportunity to once again discuss her desire for stricter gun control.

It is just beyond my comprehension that we are seeing these mass murders happen again and again and again. And as I have said, we have got to get the political will to do everything we can to keep people safe. You know, I know there is a way to have sensible gun control measures that help prevent violence, prevent guns from getting into the wrong hands and save lives. And I am committed to doing everything I can to achieve that.

To the other Democratic candidates' credit, Clinton isn't too far ahead of them in terms of gun control advocacy. Martin O'Malley has an extremely strong record of being in favor of reform. Since 2000, he has supported and implemented legislation that restricts access, widens background checks, and limits assault weapons. But he doesn't have Clinton's visibility and isn't repeatedly making it part of his stump speeches.

Surprisingly, both O'Malley and Clinton are far more left that Democratic Socialist Bernie Sanders, who has had a bit of an irregular voting record when it comes to gun control. And it makes sense — he's a Senator from Vermont, a state that has been historically gun-friendly. In the past, Sanders has even voted on legislation to protect gun rights. Thursday afternoon, he released a statement that called for a comprehensive approach to "sensible gun legislation."

Unsurprisingly, the Republican candidates are almost unilaterally in opposition to Clinton's stance. Mike Huckabee, Ted Cruz, Marco Rubio, and Jeb Bush have A+ ratings from the National Rifle Association for their opposition to stricter gun laws. During his time as governor of Florida, Bush signed into law the highly controversial "stand your ground" law. And Rubio introduced an act into Congress that would actually make getting a firearm in Washington, D.C. easier.

The Republican candidates are passionate about their support of the Second Amendment. Following the Sandy Hook shooting in 2013, in which a gunman killed 20 students and six adults, several of today's presidential hopefuls voted against legislation that would expand background checks. Despite bipartisan support, Lindsey Graham, Paul, and Rubio were among the Senators who voted against the motion, causing it to fail.

In fact, the only Republican candidate who isn't staunchly in favor of the Second Amendment is George Pataki, who broke the party line when he passed legislation heavily restricting gun access in New York in 2000. But unlike Clinton, Pataki isn't particularly vocal about his voting record on gun control.

Despite statements from other candidates vowing to restrict gun access, Clinton stands mostly alone among the 2016 crowd in terms of gun rights. It has become a focal point of her career, and something she continuously comes back to. She's said that she's not afraid of compromise, as long as something gets done. And it clearly isn't harming her campaign. So why is everyone else so quiet?