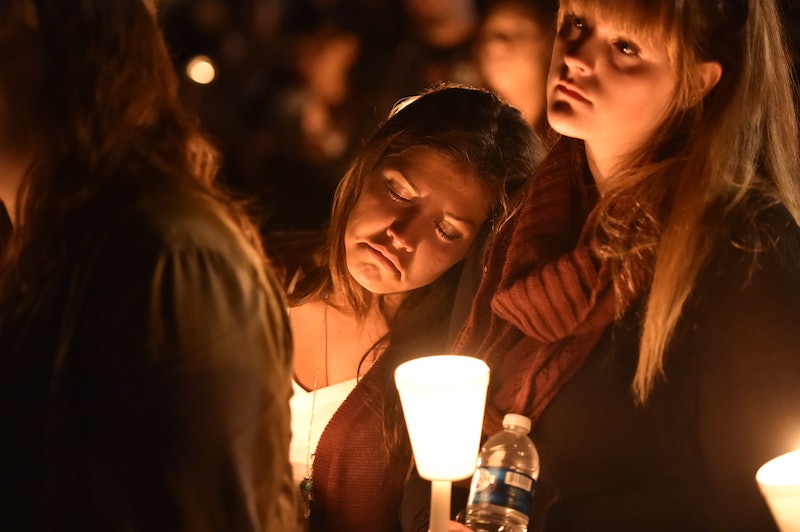 Following the shooting of twelve audience members at a screening of The Dark Knight Rises in 2012, the small town of Aurora, Colo., suddenly found itself at the center of national attention in the wake of the tragedy. As a response to the the mass shooting in Aurora, a group called No Notoriety emerged with the mission to ask the media not to name or publish photos of shooters. With the goal of removing the incentive of fame and notoriety for mass killers, the mission of the No Notoriety campaign is essentially to prioritize the identities of victims over that shooters like the suspected Chris Harper Mercer, who killed nine people and injured seven others at Umpqua Community College in Oregon Thursday, and to avoid creating a media frenzy that makes the shooter notorious for their crimes. (Update: The victims' names were released Friday night: Lucero Alcaraz, 19; Treven Taylor Anspach, 20; Rebecka Ann Carnes, 18; Quinn Glen Cooper, 18;Kim Saltmarsh Dietz, 59; Lucas Eibel, 18; Jason Dale Johnson, 33;Lawrence Levine, 67 (assistant professor); Sarena Dawn Moore, 44.)

No Notoriety's tagline is "No Name. No Photo. No Notoriety." which is a punchy summation of the requests the group lays out in its "Challenge To The Media":

The goals and sentiments driving No Notoriety have been noticed by several public figures who appear to be in agreement that at all reasonable costs, as a society we should avoid assisting violent criminals in gaining fame.

Following the mass shooting Thursday on the Umpqua Community College Campus in Roseburg, Ore., where 10 were killed including the shooter, the Douglas County Sheriff stated he would not reveal the name of the shooter to the press.

The president of UCC also stated that the focus of media attention should remain away from the subject of the shooter himself:

In 2014, the FBI also released a no-naming request to the media following mass shootings in order to avoid what they refer to as "the contagion effect," where copycat killers may become motivated by the fame received by other shooters.

Not only are law enforcement involved with the Umpqua shooting in favor of principles espoused by No Notoriety, but some members of the press have also expressed a desire to steer clear of naming shooters. Anderson Cooper famously did not name the shooter who committed the tragic killings at Sandy Hook in 2012. In addition, Fox News' Megyn Kelly tweeted on Thursday that she feels television news should not name or show photos of the UCC killer:

Kelly's tweet also raises the point that the media has a responsibility to inform the public about breaking news, matter of public safety, and generally to keep everyone informed about events that affect our society. Kelly stated that Don Lemon of CNN raised this point, and it is a fair one. The public needs to be informed about the shooter, but the idea behind No Notoriety is that the name of the shooter himself is not necessarily relevant to reporting on their crimes.

Oftentimes, the name and photo of a mass shooter is plastered all over headlines and television screens well before the names of victims are released, which inevitably causes the conversation about the crimes to be defined not by the victims (and further to the very serious gun law problems we have in the U.S.), but by the killer, who then becomes famous and likely the only name associated with the tragic event they caused.

The idea behind No Notoriety is not to withhold important information from the public (particularly when a shooting suspect is still at large, and publicized information about may aid the police in their investigation), but rather to say only what is necessary about the killer. As an example, in lieu of referring the now deceased killer behind the Umpqua killings by his name and engendering a dangerous legacy of notoriety for him, we can simply refer to him as the "UCC Shooter."

Regarding the issue of not publishing photos of mass shooters, a Twitter user offered a valid objection in response to Kelly:

The solution here, to me, seems to be as simple as referring to the criminal in the Charleston case as the "Charleston Shooter," and blurring his face when publishing or television photos that contain relevant information about the cause of the crime (as was the case with the Charleston Shooter who had many photographs of himself brandishing confederate flags).

At first blush it may seem counter-intuitive not to publicly name mass killers, especially when the identification of a killer is often learned very quickly following their crime. However, responsible reporting is still entirely possible while eschewing explicit mention of a killer's identity. By focusing as much attention as possible on the victims of mass killings and shifting the conversation to discussing actionable ways such crimes can be prevented, we not only avoid encouraging others potential killers by offering a means to infamy, but we also focus on what matters: the lives lost and what we can do to prevent future tragedies.