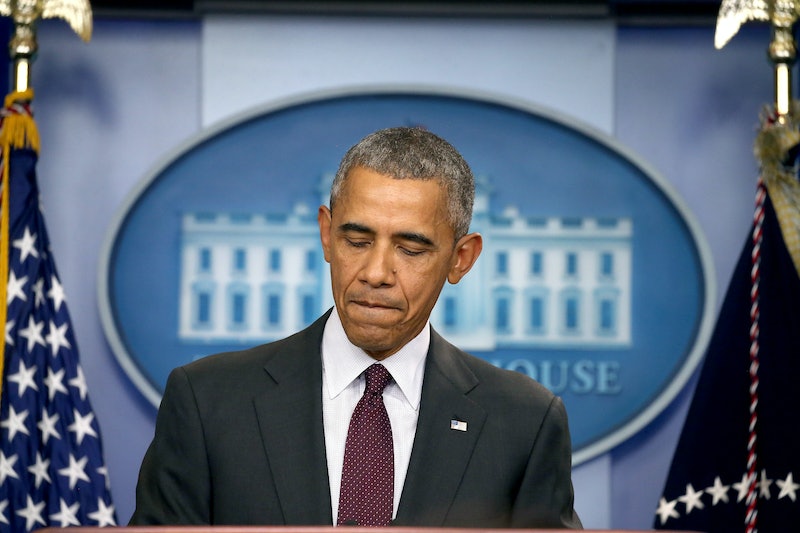 On Thursday evening, President Obama wearily took the podium for the eighth time in his presidency to speak to the American people about a mass shooting that could have been prevented by stricter gun regulations. When 26-year-old alleged shooter Chris Harper Mercer opened fire at Oregon's Umpqua Community College on Thursday, killing at least nine people and injuring seven, he became the latest poster boy for the danger of America's permissive and sloppy gun laws, laws that allow people with horrific notions of mass murder to make those notions a reality with little trouble or paperwork or interference from the authorities.

Obama asked that our thoughts and prayers go out to the families and victims of the Oregon shooting, but lamented that "Our thoughts and prayers are not enough. It's not enough. It does not capture the heartache and grief and anger that we should feel, and it does nothing to prevent this carnage from being inflicted someplace else in America, next week or a couple of months from now."

Obama implored the American people to consider stances on gun control when electing their officials. He implored that responsible gun owners question the organizations that purport to speak for them. And he implored the media to research one statistic and circulate it to the public.

"We spend over a trillion dollars and pass countless laws and devote entire agencies to preventing terrorist attacks on our soil, and rightfully so," he said. "Yet we have a congress that blocks us from even collecting data on how we could reduce gun deaths."

It is painfully ironic that the same country that supports countless wars in the name of eviscerating terror outside of our borders gives a collective shrug when acts of terror — because what else did Chris Harper Mercer visit upon his victims on Thursday if not utter terror? — occur by American citizens on American soil. And it is painfully hypocritical that our legislators are willing to casually upend the Fourth Amendment right to privacy with The Patriot Act in the interest of rooting out terrorism, when those same legislators refuse to tamper with the Second Amendment right to bear arms for fear of losing votes or upsetting the gun lobby. And it's this hypocrisy and these skewed priorities that are costing us thousands of lives each year.

"This is a political choice that we make, to allow this to happen every few months in America," Obama said. "We collectively are answerable to those families who lose their loved ones because of our inaction."