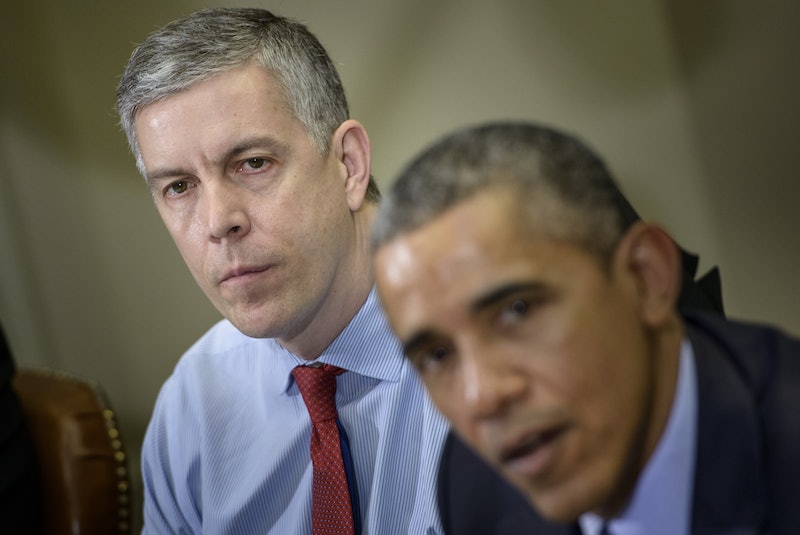 According to the Associated Press, Education Secretary Arne Duncan is stepping down after serving seven years in the Obama administration. Duncan reportedly broke the news to his staff via a letter, which was obtained by the AP, and will be returning to Chicago where his family lives. According to the AP, President Obama will announce the news Friday afternoon and name John King Jr. as acting secretary through the end of his second term.

On Friday, Obama confirmed the news to reporters, saying he pushed Duncan to stay but accepted his decision because he, too, understood what it was like to be away from his family for long periods of time. "While I will miss Arnie deeply, he has more than earned the right to return to his home," Obama said.

Duncan is the ninth U.S. secretary of education, according to his White House bio, after being confirmed by the Senate in January 2009. He is one of the few original members of Obama's cabinet. Duncan, who previously ran Chicago's public school system, also had a personal relationship with the president before joining his administration.

Duncan's first big initiative, Race To The Top, awarded competitive grants totaling $4.3 billion to states to incentivize them improve their K-12 schools, whether by polishing teacher performances, clocking in higher student test scores, or reforming low achieving schools. The White House has called the initiative a success, while critics blasted the program for promoting federal oversight on states' education systems. Some winning states, like New York, were blasted by teachers and parents alike, who claim the money never lived up to their states' promises.