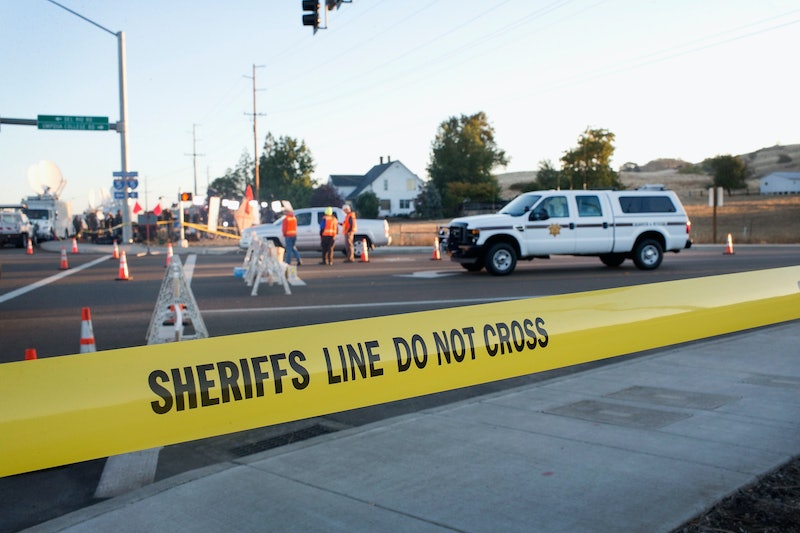 On Oct. 1, 2015, at least nine innocent people perished when a gunman opened fire at Umpqua Community College in Roseburg, Ore. But that toll may have been much higher had it not been for the actions of one man, and the countless Twitter reactions to Chris Mintz's heroism show that "forgetting the zero and remembering the hero" is the best way to honor him. An Army veteran who was in his second year at UCC, Mintz did that which most of us can only hope we'd have the courage to do — he risked his life to save others. Specifically, he rushed the gunman in an attempt to protect his classmates. In the process, he was shot at least five times in his back, abdomen, and hands. He also suffered two broken legs in the scuffle. As he lay wounded on the floor, he could be heard saying, "Today is my son's birthday." Miraculously, he's expected to make a full recovery.

If you find his story affecting, you aren't alone. People all over the country are blinking back tears over Mintz' valor, including me. And while he undoubtedly has a long road of healing ahead of him — including learning to walk again — the North Carolina native is in good spirits... and still thinking of others. "This is Chris's friend, Chris asked me to thank everyone for their support, he is grateful and keeping our community and all victims in his thoughts," reads a Facebook page appearing to belong to Mintz. When word got to Mintz's cousin, Derek Bourgeois, about his bravery, Bourgeois registered little shock: "It sounds like something he would do," he told the Daily Beast.

The UCC Shooting has understandably been a trending topic of discussion, given so many innocent lives were lost. Not to mention the fact that this is the 45th time in 2015 a gunman has opened fire in a school. Yet, if you're hoping to hear the full name of the shooter in this article, you won't. Like Douglas County Sheriff John Hanlin and the Daily Beast's Michael Daly, I decline to give the shooter that dignity. I, too, think we should "forget the zero and remember the hero."

So what does the Twitterverse think? This cross-section of tweets should give you a good idea. Hint: Chris Mintz is an American hero.

Many Want To Honor His Actions:

Some Simply Want To Say Thank You:

Some Are Sending Their Thoughts For Him To A Higher Power:

Many Want to Make Sure The Spotlight Is On The Right Chris:

Some Are Humbled By His Humanity:

Others Can't Help But Consider It In A Broader Context

And This Guy, Well, He Couldn't Resist Bringing Up the Other, Other Chris: