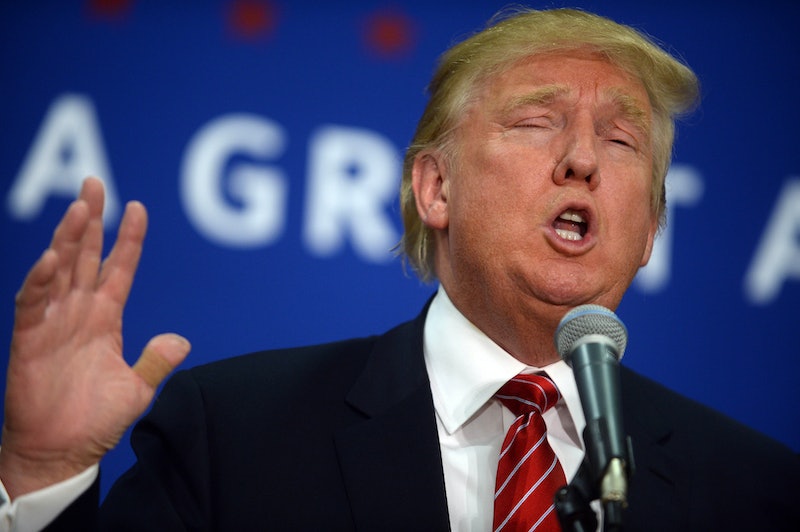 Don't look now, but Halloween is right around the corner. And if you haven't started working on a costume yet, you should probably get started — the better preparation, after all, the better result you'll have come Oct. 31. There is obviously a nearly endless slew of options, but there are some choices from the world of politics you're likely to see your fair share of. A Hillary Clinton costume, perhaps? Maybe a Barack Obama to celebrate the rapidly approaching final year in office? Or, of course, Trump himself — here are nine punny Donald Trump Halloween costumes you should consider, because he's undeniably the biggest showstopper of the political season.

The great thing about a Donald Trump costume is that it doesn't have to be an admiring tribute. In spite of the fact that there's a lot to laugh about in Trump's brusque style and meandering, aimless speeches, it's also pretty serious — this guy is not ready to be president, suffice it to say.

As far as costumes go, though, he's prime material, and with the additional twist of a pun, you can turn a tired old Donald Trump idea into something unexpected and fun, even if it's a little cringe-worthy the moment the joke hits home. Here are nine such examples — just remember, some of these may require a good deadpan delivery when someone asks you to explain yourself.

This one pretty much speaks for itself, even though there's a couple different ways to handle it. You can either dress up in a tacky suit, throw on a faded blond Trump wig, and pin playing cards all over yourself, or you can go with the more artistically challenging approach, dressing up as a big playing card with Donald Trump's face photoshopped in over the King's head. Either way, the message is pretty clear: Trump Card!

If you want a quick and easy pun costume, and you've got any musical talent to spare, this could be one for you — just cobble together a Trump costume (the tacky, bright red baseball cap is always a nice touch) and then strap a trumpet around your neck. Bonus points if you know how to play "Hail To The Chief," especially because the puffy cheeks and red face will only amplify your Trumpishness.

The rump roast is a popular, time-tested cut of beef, coming from the rear leg of a cow. And while not everybody is down with eating animals — shoutout to all the vegans out there — anyone who's okay with having some meat on their person could pull off this slightly grisly costume idea.

Just get some thin slices of meat, and attach them to the back of your Trump outfit (stitches or staples should work, provided the meat is light enough), right around the buttock region. Sure, you'll have to make sure you keep on your feet, and the smell might be a bit undesirable for an indoor party, but it's an A+ pun costume.

You're not above a good poop joke, right? Hopefully not, because here we go: why not create a costume of Donald Trump perpetually hunched over a toilet? It'll require a little arts and crafts know-how — you'll have to fashion or purchase a lightweight, faux-toilet model and attach it to the back of your pants, so that it hangs there, forever sticking off your butt.

It's a more involved (although slightly more hygienic) version of the Trump Roast idea mentioned above. But it's got at least one real strength: it perfectly captures the dignity of the man himself.

Who's to say Donald Trump isn't an awesome, acrobatic hip hop dancer? I mean, basically everyone, but don't let that stop you — just throw on a Trump wig, a tortured facial expression, and a late '80s-appropriate leotard, and you're ready to Trump Up The Jam.

Sometimes the blunt, no-frills approach is the funniest — just get yourself a tree costume, and slap your Trump wig on top of it! If it weren't already obvious, your Trump wig will be the number one priority for most all of these ideas — there's no single other feature that'll make people realize the core theme of your costume so quickly.

The mumps are no laughing matter, but if you're looking for a good Trump pun for Halloween, it's a convenient choice — the iconic lumpy facial swelling it causes can be replicated pretty easily, just by stuffing your cheeks with cotton balls. Of course, that makes this a pretty commitment costume, as you're going to get tired of having packed cheeks eventually, but it'll all be worth it when somebody asks who you are and you give you garbled, muffled answer: "Donald Mumps."

I admit that "chump" is a kind of arbitrary concept, and it might be hard to bring off, considering how chumpish the guy is to begin with. This being so, being straightforward might be the best approach — just put together a normal Trump costume, then write "CHUMP" on your forehead in bright red marker. Be sure it's washable, though, because that would be a tough one to explain at the office the next day.

Fact: everything is funnier when you add some weed. If you're looking for proof, just class up your standard-issue Donald Trump costume with a faux-blunt, and maybe a tie-dye T-shirt under the suit jacket to really drive the point home. A little toke could probably help Trump's political fortunes, in fact — if he'd gotten stoned after the first GOP debate, maybe he would've spent less time rage-tweeting against Megyn Kelly.