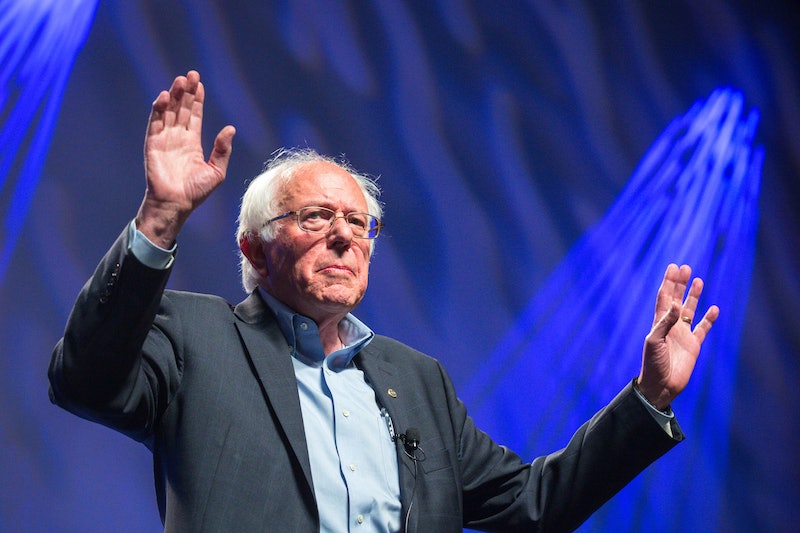 This Halloween, you won't need the financial backing of a Super PAC to execute a great costume. If you're fighting for economic equality and want to go the political costume route, why not be Vermont Sen. Bernie Sanders this Halloween? You could be a — gasp — democratic socialist this Halloween season, and everyone will be talking about you. And then, you'll be the one who's been rapidly rising in the polls, and you can cross running for president off your bucket list.

I believe in maintaining a fairly tight budget for Halloween costumes — I'm sure Sanders would agree — and besides, you can get creative! He's fighting for equal access to education, a higher minimum wage, accessible health care, and so on, and I'm going to show you how you can apply those things to a fantastic costume.

If you do decide to make any purchases, be wary of who you're buying materials from; you don't want to invest in poor labor practices. Below, I've provided you with a few different ways in which you can take your Halloween costume game to the next level; just make sure you're prepared for some crazy hair and a wild ride.

If you want to look like Sen. Sanders this Halloween, you're in luck. His look is pretty consistent. Here are some suggestions for accessories you can use.

Any wig with flyaway gray hair can be trimmed to look more Sanders-esque. Like this one from Amazon, fittingly described as a "Mr. President Wig."

This one will do, too.

Definitely trim the top and sides of this wig, unless you're trying to be a younger Sanders. Alternatively, see if any local theatre companies are willing to let you borrow one (that's how I got my costume gloves!).

You'll also need some glasses. Any glasses with rectangular frames will probably do the trick. If you want to stick to a budget, just ask around to see if anyone has any lying around. Or, if you're feeling a little more liberal with your spending money, you could check out these costume glasses that won't affect your vision when you wear them.

Finally, you'll need a tie. You can find a Sanders-appropriate tie on Amazon for less than 10 dollars. Here's an example. Pair it with any long-sleeved, collared shirt, preferably white or light blue.

Obviously, this is a simple and flexible costume. Don't stress about getting exactly the right accessories — you should be able to pull off a modified version of Sanders' look with under 30 dollars, if that.

First, grab a pair of those nifty sunglasses, so that you can campaign for Sanders as you're explaining economic inequality using pieces of candy. They can be found here for $14.95. Then, head outside on Halloween evening, and hand out diplomas and band-aids to all the trick-or-treaters, to represent universal education and health can access. It also doesn't necessarily have to be these three items. You can use any accessories that, in your mind, symbolize these two things that Sanders has pushed for during his career.

A lot of Sanders' policy ideas simply involve being a decent human being, and are not as radical as people would have you believe. You don't need to look like Sanders to be him for Halloween. Just spread the word to end inequality, and keep on #FeelingTheBern.

You're now more than ready to go out into the world on Halloween. Just remember: You don't need to spend a lot of money, you don't need a Super PAC, and you can be creative!