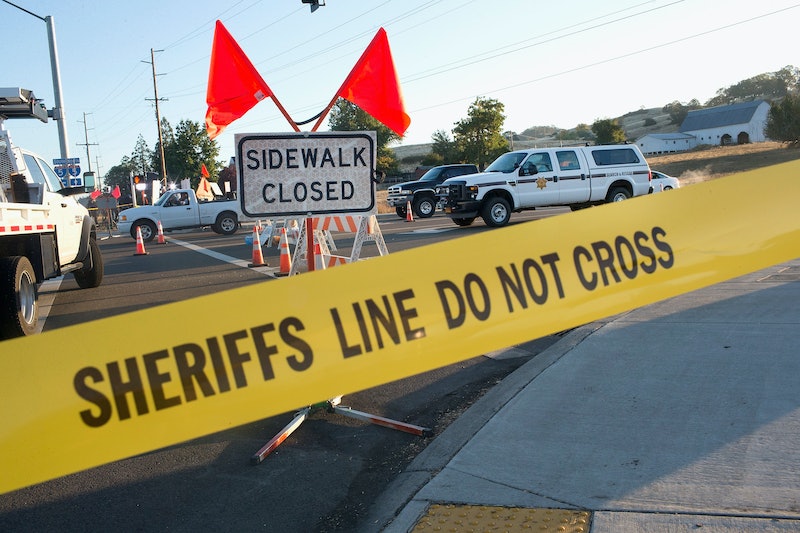 After the Oregon gunman, identified by law enforcement sources to USA Today as 26-year-old Chris Harper Mercer, opened fire at Umpqua Community College in Roseburg, Ore., on Thursday, many people wondered what may have caused the gunman's actions. Ten people died Thursday, including nine victims and the shooter, who killed himself. At least another seven more were injured in the attack. At a press conference Friday, authorities provided some clues as to why the gunman may have initiated the mass shooting. A note officials believe Mercer wrote portrays him as a "bitter" man who "may have had strong hostilities toward religion," USA Today reports. Authorities suspect the Oregon school shooting may have been motivated by religion, as the shooter reportedly targeted Christians in the attack. (Update: The victims' names were released Friday night: Lucero Alcaraz, 19; Treven Taylor Anspach, 20; Rebecka Ann Carnes, 18; Quinn Glen Cooper, 18; Kim Saltmarsh Dietz, 59; Lucas Eibel, 18; Jason Dale Johnson, 33;Lawrence Levine, 67 (assistant professor); Sarena Dawn Moore, 44.)

In addition to the religious aspect, the note also reportedly depicts Mercer as a loner. Officials believe the note in question suggests Mercer lived a solitary life and didn't have many friends offline. The note allegedly contained words of praise for other killers who have perpetrated mass killings and also depicted "an isolated life with little promise," USA Today reports.

Anastasia Boylan, one of Mercer's victims who survived the attack, told her father, who recounted the story to CNN, that Mercer walked into her classroom and said that he'd "been waiting to do this for years." Before shooting multiple students, he reportedly asked them if they were Christian, and then told them they were "going to see God." Similarly, J.J. Vicari, whose sister Autumn witnessed the shooting, told NBC News that students who said they were Christian were shot in the head, while the others were shot in other body parts.

The Washington Post notes that Mercer's email address referenced an "iron cross," typically a symbol associated with Nazis. The Post also describes Mercer as "a quiet, withdrawn young man who struggled to connect with other people." The media's portrayal of Mercer as a loner echoes previous descriptions of those responsible for mass shootings — The Los Angeles Times referred to Elliott Rodger as a "quiet, troubled loner," and James Holmes' neighbors used the word "loner" to describe him to various newspapers as well.

Aside from sparking conversations about stricter gun control laws, the characterization of these shooters as "loners" emphasizes the need for accessible mental health treatment in the United States. Donald Trump said on MSNBC's Morning Joe Friday that "these things happen" because it's impossible to identify every loner before it's too late. "It's awfully hard to put somebody in an institution for the rest of their lives based on the fact that he looks like he could be a problem," Trump said on MSNBC. Trump is right — but we can still offer programs to help these troubled individuals before another school shooting occurs.