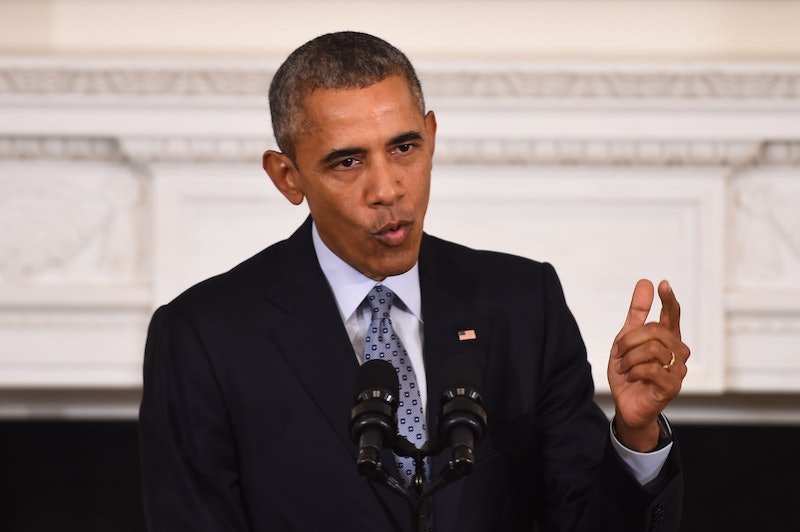 The president usually stays above the fray when it comes to election talk, but one candidate's comments has stoked his ire. On Friday, President Obama blasted Jeb Bush for saying "stuff happens" in response to the devastating shooting at Umpqua Community College on Thursday that claimed 10 lives, including the gunman's. Obama has been forced to deliver heart-wrenching remarks after a mass shooting an astounding 15 times during his presidency, and gun violence continues to hang as a dark cloud over his time in the White House.

When asked about tightening gun control reform nationwide, the Republican presidential candidate, who spoke Friday at the Conservative Leadership Project, called the events in Oregon "very sad" but continued to say, "Look stuff happens, there’s always a crisis and the impulse is always to do something, and it’s not always the right thing to do." Bush later stood by his comments, as captured on another video.

Obama, a day after delivering yet another impassioned speech condemning gun violence, was then asked later on Friday to respond to Bush's statements. "I don't even think I have to react that one," the president said. "I think the American people should hear that and make their own judgments based on the facts that every couple of months, we have a mass shooting."

And America is speaking up. The Internet lit up in outrage at Bush's comments, which were particularly insensitive as details continue to surface about the gunman, identified by law enforcement sources to CNN as 26-year-old Chris Harper Mercer, and his nine victims.

In his underwhelming campaign for president, Bush has largely remained under the radar despite his political family name. But this might just take him out of the obscure footnotes of the "bajillion Republicans running for president in 2016." While the backlash appears to be strong against a man who describes mass shootings as stuff happening, the bigger fear is that there are some people out there who agree with him.