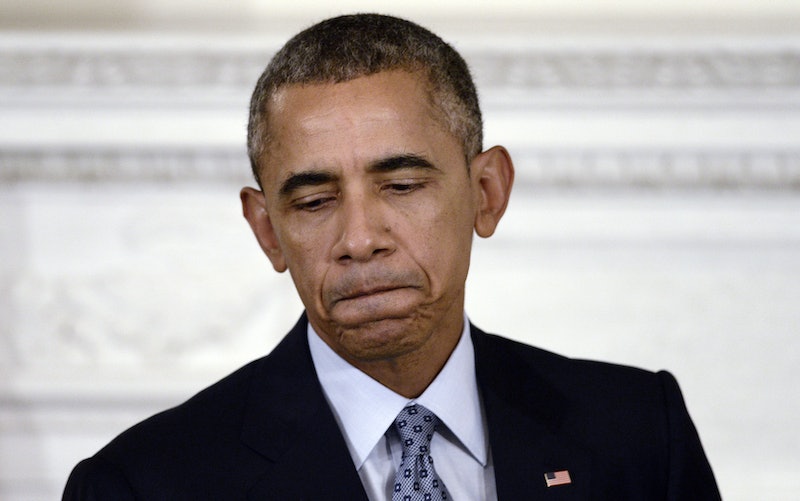 At a press conference Friday, one day after the devastating Umpqua Community College shooting that left nine dead, not including the shooter — identified late Friday as 26-year-old Christopher Harper Mercer — Obama was blunt and stoic on gun control, calling out both the NRA and the Republican party on their fatal inaction. "Every couple of months we have a mass shooting," Obama said, visibly frustrated. "This will not change until the politics change."

"Our inaction is a political decision that we are making," Obama said. Of course, the "us" Obama is speaking of isn't his party, nor his Congress — it's the majority of lawmakers who have, over and over again, rejected legislation that would curb access to firearms in the United States. Most memorably, after the Sandy Hook massacre of 2012, background check legislation came close to being passed and surely preventing deaths — but was struck down by Congress, leaving Obama fuming alongside the Sandy Hook families who had come to Washington, D.C. to plead for smarter gun policies.

This is not the first speech of this kind Obama has made, and sadly, it will not be his last. In the Rose Garden back in 2013, shortly after the post-Sandy Hook legislation was defeated, Obama raged:

By now, it’s well known that 90 percent of the American people support universal background checks that make it harder for a dangerous person to buy a gun. We’re talking about convicted felons, people convicted of domestic violence, people with a severe mental illness. Ninety percent of Americans support that idea. Most Americans think that's already the law.

Like so many others before it, the Umpqua shooting laid bare the back-and-forth about gun control: the shock that such a thing could happen; the desire to make sure an incident like this does not happen again; the realization that, with the lawmakers our country has in place, nothing can be done, and so it can, and it will.