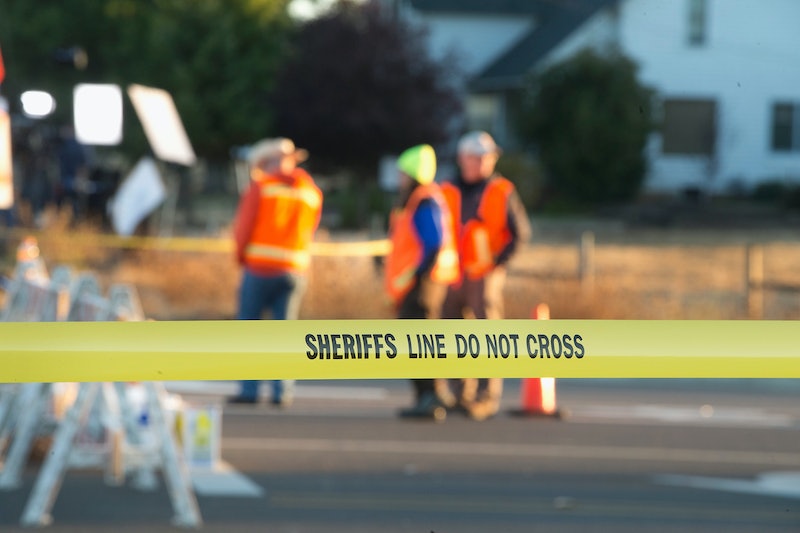 Authorities on Thursday reported that a total of 10 people, including the gunmen, were killed in a tragic mass shooting at Umpqua Community College in Roseburg, Ore. One of those students was 20-year-old Umpqua basketball player Treven Anspach, who friends say was a "hard worker" and a beloved member of the campus community. In an interview with People on Friday, friend Jesse Milbrat, who previously worked with Anspach at a nearby wood products company, remembered the friendly student as a "great kid."

"He was a hard worker and a damn good basketball player," Milbrat, 20, told People. "I was with him the last day I was in Oregon before I left for the Army [in May] ... The last thing he said to me was, 'Good luck and thanks for your service.'" Milbrat added that Anspach "deserve[d] way better" and that he would be missed by all who knew him.

According to a report by The Guardian, Anspach's Facebook page indicated he had graduated from Sutherlin High School in 2014 and was working "dryer utility" at Roseburg Forest Products while simultaneously attending classes at Umpqua. In a statement on the company's official Facebook page Thursday, Anspach's former employers wrote, "Our hearts go out to all those affected by today's shooting at Umpqua Community College."

In a statement to Guardian reporters on Friday, Anspach's former basketball coach remembered the student as a hopeful young man who had wanted a simple life. "We love him and will miss him greatly," said Umpqua Riverhawks coach Daniel Leeworthy. "All he wanted to do in life was to marry his high school sweetheart, be a firefighter like his dad, and to serve others ... he was a friend and a coaches [sic] dream. He was a friend to everyone."

In Anspach's high school yearbook, the 2014 graduate had chosen a comment by comedian Bill Cosby as his senior quote. "In order to succeed," read the caption beneath his senior photo, "your desire for success should be greater than your fear of failure."

Our thoughts are with Anspach's family and friends.

More like this
Chris Kaba's Family Continue Fight For Justice After Viewing Police Bodycam Footage
By Sophie McEvoy
These 2 Women Could Be America’s First Lesbian Governors
By Tess Garcia
These 25 Female Governor Candidates Won Primaries & Could Make History
By Tess Garcia
What Does Nancy Jo Sales Think Of 'The Real Bling Ring'?
By The Editors
Get Even More From Bustle — Sign Up For The Newsletter