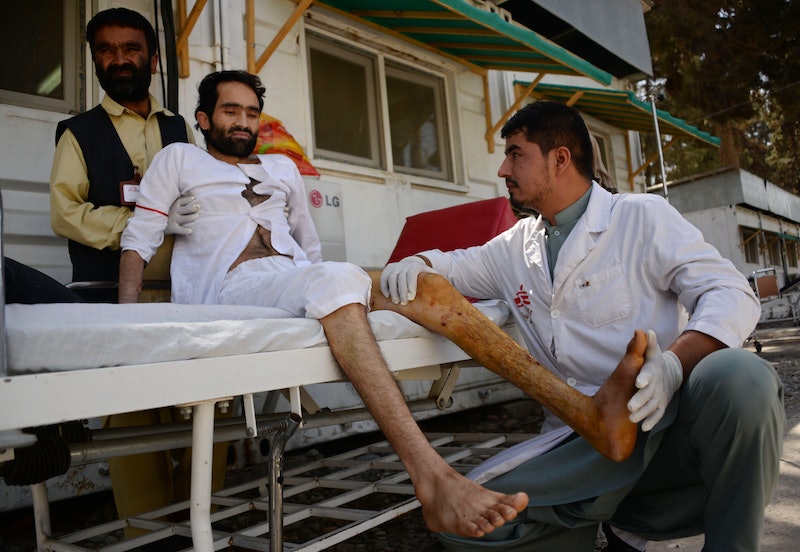 Officials on Saturday reported that the death toll in a possible U.S. airstrike on a Kunduz, Afghanistan hospital had risen to 19, with at least nine Doctors Without Borders staffers on the list of victims. According to reports, organization leaders said that the hospital "was hit several times during a sustained bombing" that occurred shortly after 2 a.m. on Saturday. The news immediately prompted backlash from the global community, with several nonprofits stepping forward to condemn the bombing.

"[Saturday's airstrike on Kunduz city] may have resulted in collateral damage to a nearby medical facility," said military spokesman U.S. Army Col. Brian Tribus, in a statement. A Doctors Without Borders spokesman confirmed the information, saying that among the dead were three children, nine Afghan staff members, and seven patients. At least 37 more people were injured, including an additional 19 staffers.

"This attack constitutes a grave violation of International Humanitarian Law," said the group, which is also known by its original French moniker, Médecins Sans Frontières (MSF), in a statement on Saturday. "At the time of the aerial attack there were 105 patients and their caretakers in the hospital, alongside more than 80 international and national MSF staff ... MSF demands a full and transparent account from the Coalition regarding its aerial bombing activities over Kunduz on Saturday morning."

In an email to Bustle on Saturday, an MSF spokesman declined to elaborate on the identities of any of the staffers, but included an official statement from MSF president Meinie Nicolai.

"We cannot accept that this horrific loss of life will simply be dismissed as 'collateral damage,'" said Nicolai. "Besides resulting in the deaths of our colleagues and patients, this attack has cut off access to urgent trauma care for the population in Kunduz at a time when its services are most needed."

According to The Wall Street Journal, none of the hospital's international staffers were killed in Saturday's airstrike.

Heman Nagarathnam, MSF Head of Programs in northern Afghanistan, recounted a grisly scene in a statement to the press. He explained,

The bombs hit and then we heard the plane circle round. There was a pause, and then more bombs hit. This happened again and again. When I made it out from the office, the main hospital building was engulfed in flames. Those people that could had moved quickly to the building’s two bunkers to seek safety. But patients who were unable to escape burned to death as they lay in their beds

In a news conference on Saturday, Afghanistan Interior Ministry spokesman Sediq Sediqi told reporters that the 10 to 15 suspected "terrorists" that were allegedly hiding in the hospital had been killed, but added gravely that they had "also lost doctors" in the strikes. Taliban leaders later denied the accusation, saying that none of the group's fighters had been inside the hospital at the time of the bombing.