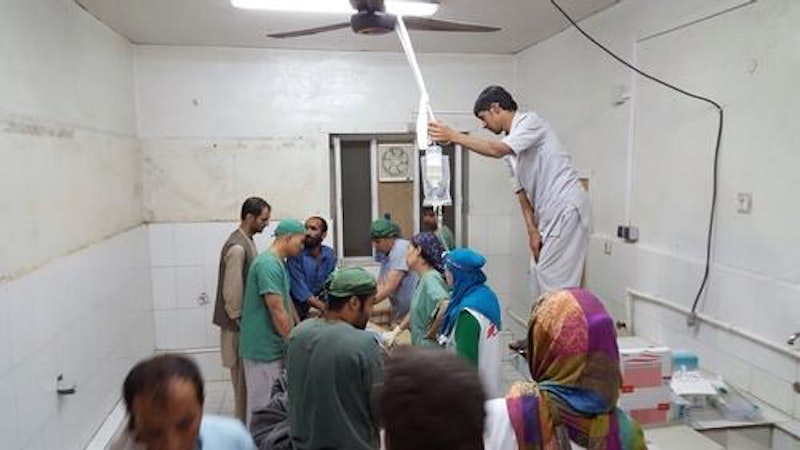 An apparent U.S. airstrike severely damaged a Doctors Without Borders hospital in Kunduz, Afghanistan, early Saturday morning, killing nearly 20 people and wounding at least 37 others. Doctors Without Borders confirmed on Twitter that 12 staff members were killed and another 19 were injured in the bombings, which lasted for nearly an hour. The Kunduz hospital was the only medical facility serving northeastern Afghanistan, and was vital to the health of the war-town city because of its trauma care services.

When the Kunduz hospital opened in August 2011, it had just 55 beds. The hospital was established to serve as a trauma center, specializing in surgery and limb-saving operations, and treating life-threatening injuries. Because of the heavy fighting in the region, doctors at the facility mostly dealt with wounds sustained from gunshots, shrapnel, and explosives.

By 2015, the Kunduz hospital had expanded to more than 90 beds, but according to the organization, that hasn't been enough in recent days. In a blog post published on the Doctors Without Borders website Thursday, medical team leader Dr. Masood Nasim provided a detailed account of the first 72 hours following the heavy fighting that erupted in Kunduz on Monday.

"By midday our hospital was on the front line, with fighting right outside the gate," Nasim wrote. "You could hear the sound of shelling, rockets and airplanes. Some bullets have come into the hospital, some even through the roof of the intensive care unit."

The hospital took in nearly 300 patients, more than double of what the facility can handle. "We normally have a capacity of 92 beds, but we expanded immediately and increased the number of beds to 150," Nasim wrote. "There have been patients in the offices, in the examination rooms, and being stabilized on mattresses on the floor."

Nasim added in the blog post that more than 90 surgeries were performed at the Kunduz hospital in two days. Most of the patients arriving at the hospital were in "very critical condition."

Photos posted on the Doctors Without Borders official Instagram account provide glimpses from inside the Kunduz hospital in recent days.

Now, the Kunduz hospital is "badly damaged," with much of it burned and destroyed. In an updated statement released Saturday, Heman Nagarathnam, head of Doctors Without Borders programs in northern Afghanistan, said, "The main hospital building was engulfed in flames." Many patients were trapped by the flames, Nagarathnam said.

As the death toll of the Kunduz tragedy rose on Saturday, remembrances of the Doctors Without Borders hospital began pouring in on social media.