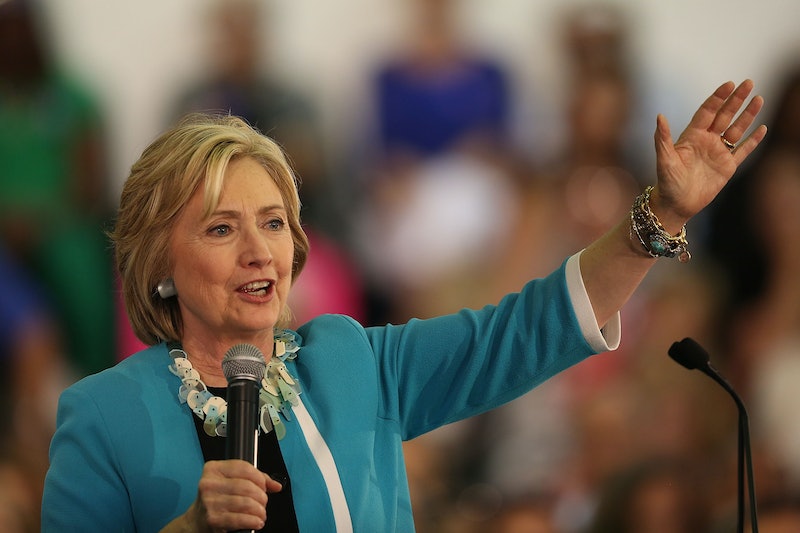 In 2011, a longstanding policy in the United States armed forces came to an end: Don't Ask, Don't Tell (DADT), the compromise that allowed gay Americans to enlist and serve in the military, provided that they hid all traces of their sexual orientation from their fellow soldiers or commanding officers. Now one Democratic presidential contender wants to take a positive step: Hillary Clinton wants honorable discharges for gay soldiers who were kicked out due to DADT, codifying once and for all that the discrimination isn't just wrong now, but was wrong then, too.

In the era of Don't Ask, Don't Tell, if word leaked out that you were a gay or lesbian soldier, it was grounds for outright dismissal from any branch of the American military. The Pentagon, too, has recognized the policy as problematic — during the 2011 repeal, defense secretary Leon E. Panetta publicly described the change in policy as “a matter of fundamental equity."

Here's how Clinton put it in speaking to the Human Rights Campaign, as detailed by the Washington Post.

The DADT issue is by no means remote or academic for Clinton — it was her husband Bill who backed and signed the policy into law back in 1993. She was openly opposed to the policy before his term had even ended, however — as The New York Times reported, she stated her opposition to the policy in 1999, to a group of gay contributors.

Her own track record on gay rights has come under scrutiny from some activists and observers, as she took longer to come around on same-sex marriage than the broader Democratic Party and its base did — she was officially opposed to same-sex marriage until 2013, a fact which raised some tension during an interview with NPR's Terry Gross earlier this year.

On the broader topic of gay rights around the world, however, she's been a vocal advocate, especially during her tenure as Secretary of State. Back in 2011, she delivered a landmark speech on gay rights at the United Nations — saying that "gay rights are human rights," and calling for global protections and respect across cultural lines — paired with the release of an Obama administration memorandum on advancing global LGBT rights.