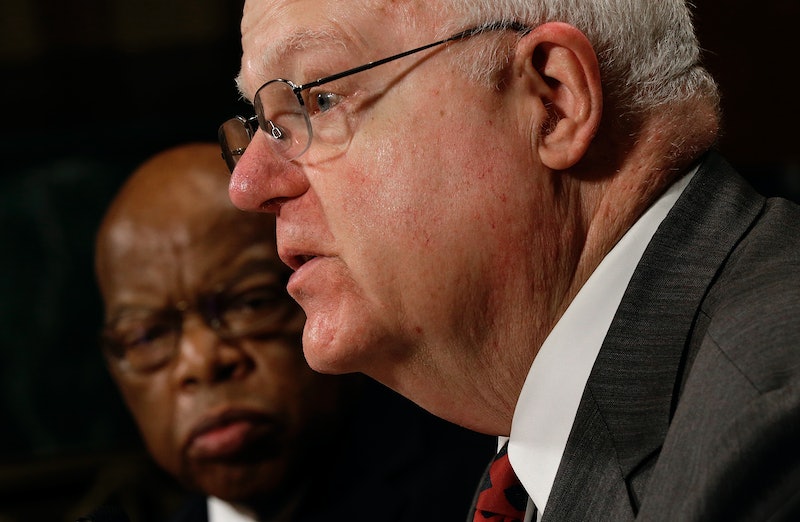 In a town hall gathering on Saturday, Wisconsin Republican Rep. Jim Sensenbrenner said that Planned Parenthood's alleged practice of selling fetal tissue for cash was "outrageous and disgusting", and that he and his GOP colleagues would be attempting to defund the organization again in the coming weeks. Sensenbrenner, who served on the House Judiciary Committee in charge of overseeing the Planned Parenthood hearings in September, added that the nonprofit's patients could easily be taken care of by corresponding community health clinics. However, since the majority of his claims had already been debunked by a federal investigation and several news reports that countered the community clinic argument, Sensenbrenner's Planned Parenthood comments on Saturday proved that the GOP congressman had little idea what he was talking about.

"I think it’s outrageous and disgusting, what came out on the [Center for Medical Progress sting] videos," Sensenbrenner told the small gathering. "They’re selling the body parts and tissue of aborted babies [and] I don’t think that a half a billion dollars in government money should be given to Planned Parenthood, even if they weren’t actually caught in the act."

When asked about how cutting funding to the organization might affect female patients who currently use the clinic's health services, Sensenbrenner claimed that it would not limit women's access to healthcare because it went to plenty of other clinics who did the same thing. That statement, of course, was patently false.

The Congressional Budget Office has estimated that hundreds of thousands would lose healthcare access if Republicans attempted to defund Planned Parenthood again down the road. Considering the current shortage of community clinics able to handle the sudden influx of patients, Sensenbrenner's comments were particularly confusing.

"Defunding Planned Parenthood clinics and then giving community clinics the money instead … [would] ensure that there were enough personnel and enough facilities to provide the same type of care to women who qualify for either free or subsidized care that is currently provided under Planned Parenthood," he claimed.

That line of reasoning has come under fire in recent months. In early September, a review by a federal judge in Louisiana discovered that, out of a list of 2,000 community healthcare providers who could readily take on the state's Planned Parenthood patients, many were specified as ophthalmologists, dentists, and specialized care providers that would be unable to offer appropriate services.

"That strikes me as extremely odd," Judge John W. deGravelles remarked during a court hearing that would decide whether the state could cancel Planned Parenthood's regional Medicaid contract. In response, one state attorney claimed that the providers had offered "family planning services in the past", according to a report by The Times-Picayune.

For the limited number of clinics actually able to take on Planned Parenthood patients, the sudden burden might be feasible at first, but according to many providers, things would quickly spiral out of control.

"If they start calling my office, it's going to be, 'Well, we could take you but it might be two, three months down the road,'" wrote physician Mark DeFrancesco, in an op-ed last month. "If they call other places, it might be, 'We can't even take you.'"

Compounding the problem, a map circulated this week by several pro-life groups showed that there were supposedly over 13,000 community health clinics across the United States that could accept the sudden outflow of Planned Parenthood patients; However, the graphic distinctly failed to point out that the list had been compiled from data out of the Department of Health and Human Services' medicaid branch — and since most of the listed clinics did not have a certified OB-GYN on staff and were instead categorized as general health clinics, they did not meet the requirements to adequately provide reproductive services to women.

On Saturday, Sensenbrenner seemed to wave off each issue. "It seems to me that when we’re talking about setting government priorities, there are priorities more [important] than what Planned Parenthood does," he said.