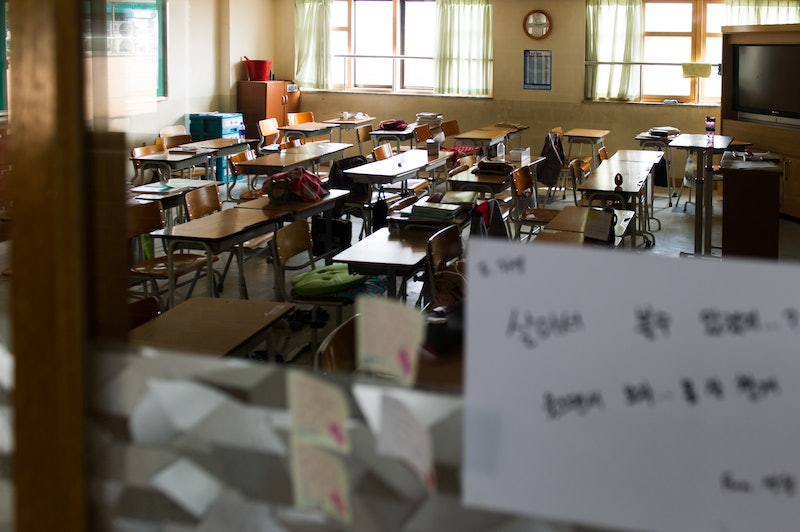 According to CBS News, no less than 22 people at a North Carolina high school were hospitalized on Saturday, some with "life-threatening" injuries, following the collapse of a concrete canopy that was struck by a moving truck. According to reports, there were students at Olin, North Carolina's North Iredell High School taking the SATs, as well as participating in a large band competition when the collapse took place, and at least 21 students were taken to nearby hospitals.

To this point, as WBTV notes, the names and ages of the victims in the collapse haven't yet been revealed. News of the harrowing incident spread quickly on social media, with onlookers posting images from the scene — the truck reportedly struck the concrete awning, causing it come down. According to local FOX affiliate WGHP, three of the 22 people hospitalized — 21 students and one adult — suffered from serious injuries. There hasn't yet been any official explanation given for what caused the driver of the truck to crash.

Luckily, according to WTVR, there were less people at the school when the canopy came down than there might have been — only eight out of a possible 16 schools actually showed up for the band competition, due to poor weather, and only four were actually on campus when the collapse took place, according to The Charlotte Observer.

As theObserverfurther detailed, Iredell County Medical Director Howard Mell confirmed that one of the 21 injured students was taken to a trauma center at Winston-Salem's Wake Forest Baptist Medical Center, some 48 miles away, while the rest were taken to nearby hospitals. The truck involved in the collapse collided with a beam while pulling up to North Iredell High at around 2:15 p.m. local time, according to the school district's superintendent Brady Johnson, which caused the concrete overhang to give way.