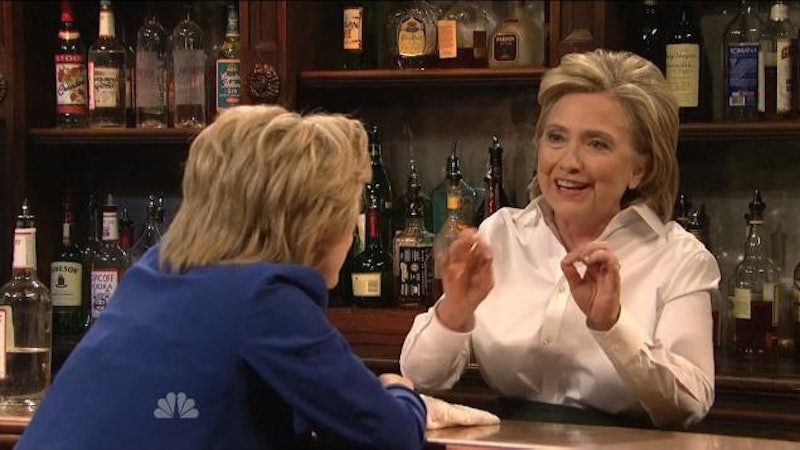 On Saturday night, amid whispers that she'd show up for the show's season premiere, Hillary Clinton appeared on Saturday Night Live with a message: She's not running from her critics. Playing a sharp bartender called Val to Kate McKinnon's Clinton, Val counseled Clinton on some of the missteps she'd made in her many incarnations as secretary of state, politician, First Lady, and presidential candidate. The message was clear: Rather than standing by while her opponents toss around accusations of flip-flopping and bare their teeth about Emailgate, the Hillary Clinton of this campaign cycle will face their accusations head-on.

First up: Same-sex marriage. A famous supporter of women's rights her entire career, Clinton was slower on the gay rights front. Though she'd supported civil unions for same-sex couples since the early 2000s, it took Clinton until 2013 to publicly state her support for gay marriage. Back in 2007, while supporting civil unions, she'd noted that she personally remained opposed to marriage between two people of the same gender. Like President Obama, Clinton was late to the game, and has been roundly criticized for it. On SNL, McKinnon-as-Clinton sighs, "Could have been sooner," when Val tells her that she supported gay marriage "pretty soon."

Next up: the Keystone XL pipeline. Citing a conflict of interest between her role as Secretary of State and the administration's stance on the pipeline, which environmentalists say will wreak damage in Nebraska, Clinton declined until recently to publicly state her stance on it. It wasn't until September that Clinton formerly opposed the building of the pipeline; meanwhile, straight-talking Val tells McKinnon-as-Clinton, "I'm just an ordinary citizen who believes the Keystone Pipeline will destroy our environment."

I see what you did there, guys.

The right-wing consistently tosses a variety of critiques at Clinton, and she won't be expecting that to let up anytime soon. Chief among their concerns, and one of the right's most legitimate concerns, is Emailgate: Clinton's use of a personal email account while conducting federal business as Secretary of State. And while Emailgate wasn't featured in the SNL sketch, it's another area in which Clinton has recently stepped up to her critics and addressed the issue head-on.

For the first months of her campaign, Clinton's position on Emailgate could be roughly described as "this is too silly to counter." Standing firm, she was clear that she wouldn't apologize. But voters were and remain largely disturbed by it, and Clinton ultimately chose to address the scandal in an ABC News interview with David Muir.

"I do think I could have and should have done a better job answering questions earlier. I really didn't perhaps appreciate the need to do that," Clinton told Muir. On using a non-federal email server, she concluded, "That was a mistake. I'm sorry about that. I take responsibility."

Some attacks on Clinton will always be too dumb to address. Like the suggestion that she can't be a grandmother and the president; like the far-right argument that Clinton is too old or too female or just too opinionated to run the country. But with her less-than-perfect record on issues that matter — civil rights; environmental issues; Emailgate, with the former two issues being of special importance to young voters — Clinton appears to have concluded that the only way to deal with such matters is to put her hands up and claim responsibility for her missteps.