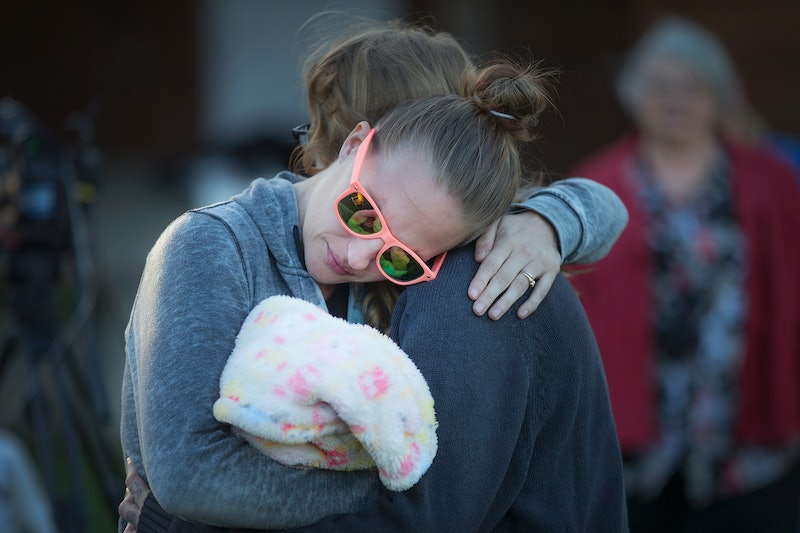 By now, we all know it: The United States has a gun control problem. Although the NRA and opponents of firearm regulation argue that obtaining more guns to protect ourselves would help solve the mass shooting epidemic, research has repeatedly shown that owning a gun is much more likely to end in suicide, homicide, or accidental death by firearm than using that gun in self-defense. One person who's aware of this is Chris Harper-Mercer's father, Ian Mercer, who was estranged from his son but immediately blamed firearms for his son's Umpqua Community College rampage in an interview with CNN Saturday.

Speaking outside his home, Mercer asked, "How on earth could he compile 13 guns? How could that happen?"

We talk about gun laws. We talk about gun control. Every time something like this happens, they talk about it and nothing gets done. I'm not trying to say that that's to blame for what happened, but if Chris had not been able to get hold of 13 guns, this wouldn't have happened.

It has to change. How can it not? Even people that believe in the right to bear arms, what right do you have to take people's lives? That's what guns are, the killers. Simple as that. Simple as that. It's black and white. What do you want a gun for?

On Thursday, the younger Harper-Mercer opened fire on other students at Umpqua Community College, leaving nine dead and nine more injured. On Saturday, authorities revealed that the gunman had killed himself as cops closed in.

Mental health is often referenced in the same breath as mass shootings, and not wrongly so — comprehensive, effective mental health care in the United States is woeful. But on the firearm point, Ian Mercer is correct: If his son had not been able to access the staggering 13 guns that were found on his person and at his home, every single one of which was bought legally, then he logically would not have been able to go on a shooting rampage.

Harper-Mercer lived with his mother, whom neighbors described him being close to, according to The New York Times. The paper also reported that Harper-Mercer was a keen gun collector who regularly visited shooting ranges. A MySpace profile apparently belonging to the shooter also sees Harper-Mercer posing alongside firearms.

Harper-Mercer's mother hasn't yet spoken out publicly about her son's rampage.