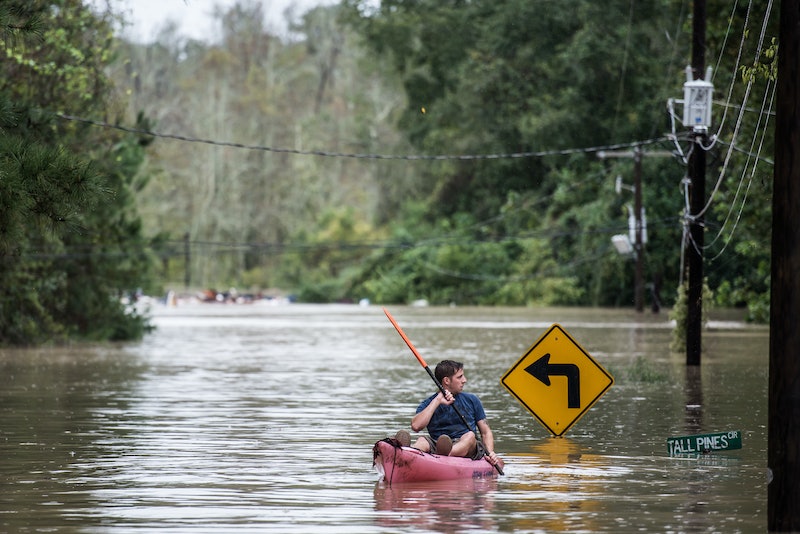 It seems like the entire East Coast is being battered by rainy day after rainy day (thanks, Joaquin), but in South Carolina, the excessive rain has turned particularly dangerous. Since Friday, four people have died in weather-related traffic accidents in the state, and other victims of the historic South Carolina floods were still waiting for help as of Sunday afternoon. South Carolina is one of several states along the Eastern Seaboard to be declared a state of emergency, and 600 National Guardsmen have been deployed in South Carolina alone — but more help is needed.

Charleston, South Carolina, had received more than 14 inches of rain since Friday — a record-breaking amount in the city's historic downtown area. Columbia, the state's capitol, reported almost 8 inches of rainfall from 11 a.m. Saturday through 11 a.m. Sunday — the most rain the city has ever received in a 24-hour period.

South Carolina Governor Nikki Haley addressed the crisis Sunday, saying, "This is an incident we've never dealt with before." On Sunday morning, the National Weather Service's Charleston office issued a flash flood warning with the urgent message, "Move to higher ground now. This is an extremely dangerous and life-threatening situation." From the coast to the capitol, several South Carolina counties issued curfews for residents in an effort to keep people off the streets and exacerbating the problem.

Hundreds of people have been rescued and tens of thousands remain without power, though it's hard to tell just how extensive the damage is until the rain finally stops. For now, several agencies are gearing up to help.

As of Friday, the South Carolina Baptist Convention had all of its Disaster Relief units on alert. The organization maintains units for specific relief efforts, including sheltering, childcare, and communications. The South Carolina Baptist Convention also deploys chaplains to disaster areas as needed. Individuals and churches can donate online to the group's flood relief efforts.

In South Carolina, the local American Red Cross chapter has wasted no time setting up shelters and organizing efforts to help flood victims. What's more, units across the country have begun mobilizing efforts to head to the area. You can donate money online to the Red Cross's disaster relief efforts, but what the agency needs most urgently are volunteers to staff its shelters across the state.

The Salvation Army is working to support communities up and down the East Coast responding to the recent flooding. On Saturday, the Salvation Army had spaces available as needed in shelters throughout South Carolina and began working with local agencies to give out food and water to displaced people. You can donate to the Salvation Army's East Coast flood relief efforts online or by texting STORM to 51555. If you text, you'll receive a message with a direct link for the organization's mobile donation platform.

If you're in the affected area, officials are saying one of the most important things you can do is stay off the roads and out of harm's way until the waters have receded. If you're not in the affected area, consider making a donation to one of these organizations, or see if there's a local group in your community that is organizing a relief effort.