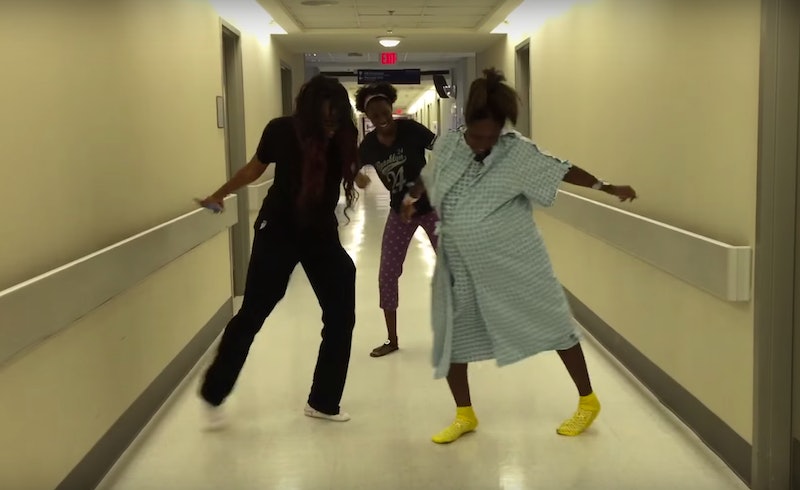 This week, a Georgia mom showed the Internet one pretty creative (and fun) way of speeding up childbirth: Instead of taking a walk or breathing deeply, Akilah Wooten danced her way through labor, right down the hallway of the maternity ward. Wooten's midwife, Angelina Ruffin, later told Fox 32 News that she suggested the first-time mother go on walks and do squats every few hours. Since the baby was carrying high, Ruffin hoped Wooten's movements would ease it downward, helping her avoid a C-section. But Wooten took things one step further: During one of Ruffin's check-ins, the midwife was surprised to find the mom-to-be dancing in the hallway along with her cousin and sister, and totally getting down to rapper Silentó's "Watch Me (Whip/Nae Nae)." (To be fair, it's pretty hard not to.)

"It made me laugh a little bit," Ruffin later told Fox. "At that point her contractions were about six minutes apart but they were having fun and finding a different way to get her girl to settle into the birth canal."

The hilarious scene left Ruffin reaching for her phone, resulting in a video that was uploaded to the Ob/Gyn Midwife Associates' YouTube page — where it's since received over 400,000 views. But while the clip shows Wooten, her cousin, and her sister busting moves, according to Ruffin, that was actually just a small glimpse of the dance party the mom-to-be led at Atlanta Medical Center that day. Catch the video below to watch Wooten get down like nobody's business.

Unsurprisingly, many YouTube commenters found the video pretty hilarious, with some wondering aloud whether Wooten's baby would inherit her mom's dancing skills. One user even applauded Wooten's laid-back approach to her delivery. "These girls/women are troopers," wrote user Messagefrom Montie. "Whenever I see pregnant women, especially by the ninth month, they just look like they're ready for that child to get OUT. She's dancing around like labor is nothing. Best wishes and hope the actual child birth was a breeze, too."

The delivery, however, was still pretty lengthy. Wooten, who gave birth last Tuesday, spent twelve hours delivering a 9 lbs. 6.5 oz. baby girl, named Erin. According to Fox 32, the new mom and her daughter were released on Friday.

Believe it or not, this isn't the first time a mom-to-be has danced her through labor pains and become Internet famous in the process. (And hopefully, it's not the last time, either.) Last August, the video of a Boston woman dancing away labor pains also went viral — though she got down to 69 Boyz's "Tootsee Roll." The video is pretty blurry, but you can still see how much fun the mom was having.

Clearly, these two moms have found a way to make giving birth a little easier (and more fun). Because let's be honest: Walking around hospital hallways for hours gets boring. But dancing? Sounds like one awesome way to lighten the mood to me.