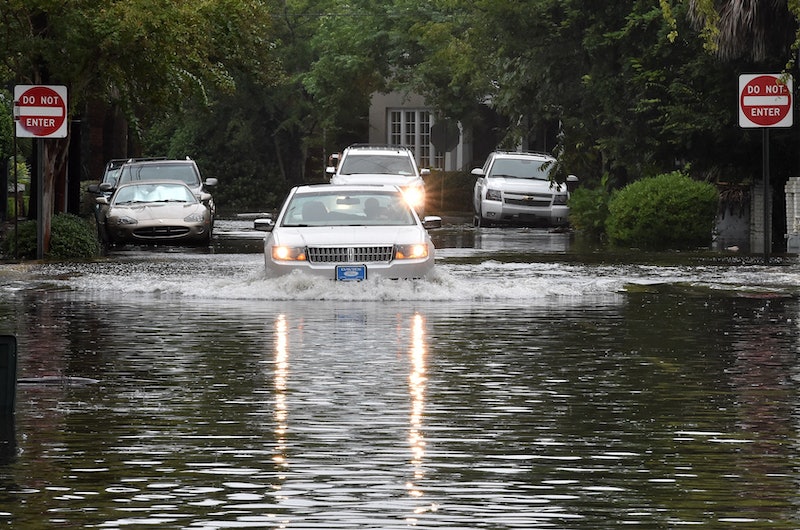 "This is an incident we've never dealt with before," Haley said on Sunday. Since Friday, Charleston, South Carolina, has seen more than 14 inches of rainfall, while Columbia, the state's capital, has seen about eight inches of rainfall this weekend. At least five people have been reported dead as a result of South Carolina's flash flooding, and South Carolina remains in a state of emergency, along with North Carolina, Virginia, and New Jersey. The National Weather Service has instructed Charleston residents to move to higher ground, and other counties in the state have implemented curfews to protect residents. Below are some of the most intense videos captured from this weekend's flooding.

The flooding this weekend became so bad that 600 members of the National Guard were deployed to help rescue citizens and evacuate them from the area, Haley said Sunday. In addition to those deployed, hundreds more National Guard members are on standby, in case of more rain. Haley also closed all of the interstate highways in Columbia, to keep residents off the road and in safe areas.

The flooding isn't over yet, either. CNN meteorologist Michael Guy said Sunday that "life-threatening rip currents, high surf and coastal flooding, mainly at high tides, will stretch nearly the entire eastern U.S. coast," and the network's Weather Center predicted that there will be "catastrophic flash flooding" in South Carolina's Berkeley County, continuing Sunday night and into Monday.

"It's not over," Gov. Haley said Sunday. "We are in the middle of it ... we have another 24 hours of this." The New York Times reported Sunday evening that many Columbia residents don't have drinking water, because the flooding caused water main breaks. Columbia has issued a boil water advisory for the city.

If you aren't in South Carolina and want to help the relief efforts, consider donating to charity organizations that are helping South Carolina recover from the flooding.