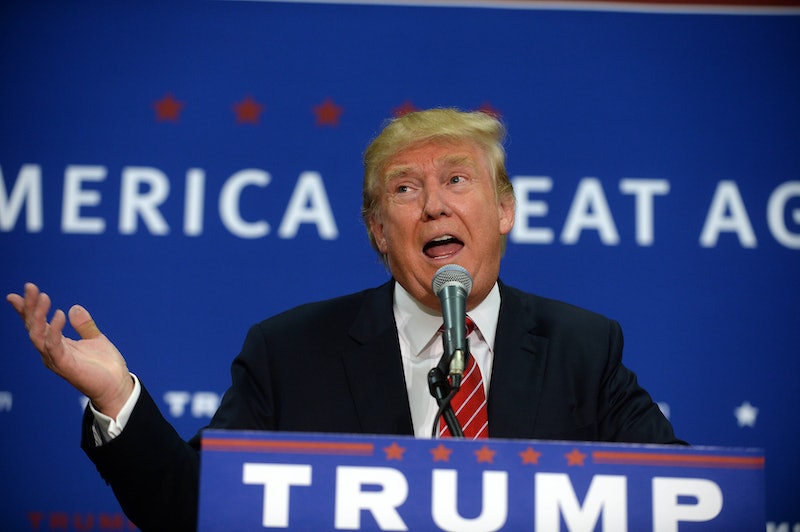 On Friday, Donald Trump made headlines when he said on MSNBC's Morning Joe that "these things happen" in reference to the school shooting at Umpqua Community College in Roseburg, Oregon, that left 10 people, including the gunman, dead. Trump said it would be "awfully hard" to identify the mentally-ill people who go on to become the "lone wolves" behind school shootings, and on Sunday, he showed no regrets about his choice of words: on NBC's Meet the Press, Donald Trump argued that more guns would have helped the Oregon victims. Unfortunately, Trump's line of thinking puts the responsibility on the victims to prevent crimes, when we should be focusing on stopping the perpetrators in the first place.

"I can make the case that if there were guns in that room other than his, fewer people would've died, fewer people would've been so horribly injured," Donald Trump told host Chuck Todd. Trump's argument shows that he doesn't believe that tighter gun control laws would help prevent school shootings like the one in Oregon on Thursday. Instead, in a strange form of victim-blaming, he wants to place responsibility on schools and its students to have guns on hand to stop these tragic events.

There's really no right thing for gun rights supporters to say after a school shooting, or any other mass killing spree involving guns, but essentially blaming the victims doesn't seem like a great place to start. Does Trump really believe that asking every institute of education, including elementary schools, middle schools, high schools, community colleges, and four-year universities, to have guns on hand in case a situation like the one in Oregon occurs? Keeping guns in schools could put more people at risk if those guns fall into the wrong hands. It would be much more practical to create stricter gun control laws than to equip every school in the country with guns, just in case.

If people are robbed, or sexually assaulted, or the victims of any other violent crime, the last thing any sensible person would do is blame the victims for not defending themselves. Saying that Umpqua Community College should have had guns for the victims to defend themselves is just as ridiculous. Trump said Friday that the mentally ill people who are responsible for mass shootings "slip through the cracks," but tighter gun laws would help seal those cracks, at least a little — and preventing even one more school shooting from happening is reason enough to consider them.