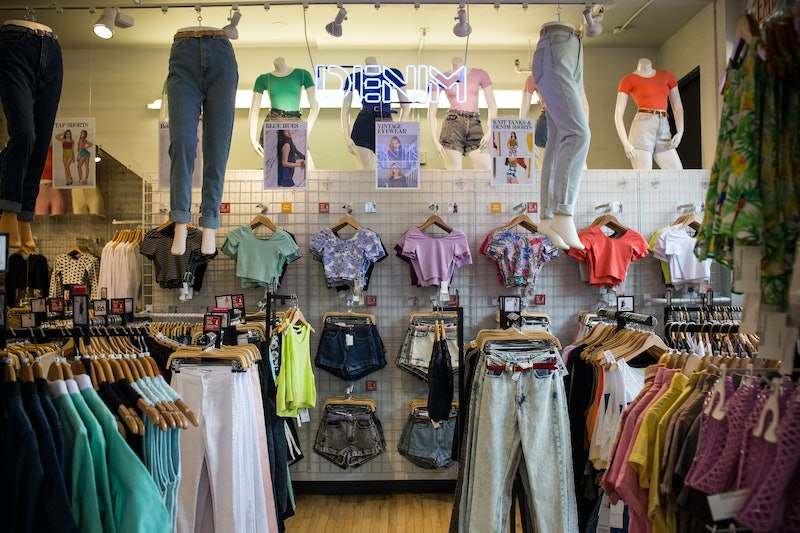 After huge efforts to reclaim its once booming business, American Apparel has filed for bankruptcy, according to a company statement released early Monday morning. Lagging sales, sexual harassment scandals, and a drawn-out legal battle with ousted founder Dov Charney have plagued the Los Angeles retailer for years, so the move isn't particularly surprising. But as an Angeleno who once coveted AA's lamé leggings and comfy hoodies, I can't help but feel sentimental about the fallen company.

The move involves a restructuring deal with most of American Apparel's lenders to reduce its debt by allowing bondholders to exchange its debt for equity in the company. The process will write off $200 million of its bonds in exchange for shares, reducing the company's total debt to around $135 million. But that also requires the retailer to file for Chapter 11 bankruptcy. The deal, which still requires approval from the bankruptcy court, would erase any holdings American Apparel's current shareholders have in the company.

In the company's statement, there was no mention of layoffs happening, and American Apparel intends to continue manufacturing out of its enormous pink factory in downtown Los Angeles. All of its 130 U.S. stories will stay open as well, the statement said.

Paula Schneider, who was brought in as Charney's replacement at the start of 2015 to turn around the company's woes, said in a statement:

This process will ultimately benefit our employees, suppliers, customers and valued partners. American Apparel is not only an iconic clothing brand but also the largest apparel manufacturer in North America, and we are taking this step to keep jobs in the U.S.A. and preserve the ideals for which the Company stands. In partnership with our bondholders, we can work towards a new future for the Company and concentrate on what matters: making and selling great clothing.

According to the statement, American Apparel plans to focus on improving its products while cutting costs and promoting "positive, inclusive, and socially conscious" marketing campaigns. And while the hope is that AA will turn it around, it will be a tough journey coming out of the hole that is Chapter 11.

More like this
Tilda Swinton’s Neon Yellow Hair Is More Than A Style Statement
By Justine Knight
Kate Middleton's Tribute To The Queen Also Had A Connection To Princess Diana
By Sam Ramsden
The Velvet Nail Trend Brings Cozy Texture To Your Manis
By Jordan Murray
15 Chrome Nail Polish Colors For An Easy, Mirror-Like Manicure
By Audrey Noble
Get Even More From Bustle — Sign Up For The Newsletter