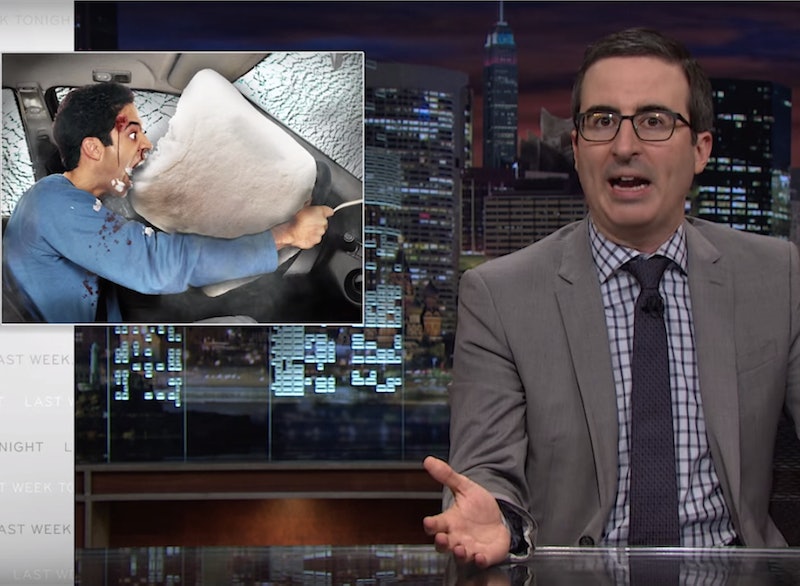 In a more serious Last Week Tonight segment on Sunday, comedian John Oliver dove into mental health to remind everyone that "the thing actors pretend to have in order to win Oscars" is actually a real problem that people still struggle to talk about in the United States. But the absolute "worst time" to talk about mental health, according to Oliver, is in the wake of mass shootings like the attack at Umpqua Community College last Thursday that left 10 people, including the gunman, dead. And that seems to be of little concern to Republicans, Oliver says, since they often use mental illness as a political talking point to redirect the conversation away from gun control reform after mass shootings like the one in Oregon.

From Donald Trump to Ben Carson and Mike Huckabee, the Republican right has often claimed that mental illness, rather than guns, is at the root of mass shootings. But Oliver, citing a study in the journal Annals of Epidemiology, points out that the majority of people with mental disorders are nonviolent and less than 5 percent of 120,000 gun-related killings were carried out by people who were diagnosed with a mental illness. The numbers don't lie — it's time we stop equating gun control and mental health care as the same kind of solution to this country's gun violence problem.

A big reason why mental health still feels like a taboo topic is because we still lack proper treatment facilities and resources for the mentally ill, who make up an estimated 18.5 percent of the adult population, according to the National Institute of Mental Health. There are some "pioneering ideas" like police crisis intervention teams that help those diagnosed with mental disorders avoid ending up in jail, where so many often go, but Oliver reminds us that we're still leagues behind where we should be in handling mental health issues.

Pioneering ideas should not be completely obvious things we should've been doing all along. They should be outlandish things that push the limit of the possible, like a fitted sheet that's easy to fold, or marshmallow airbags, or a sex doll without such judgy eyes.

And government aid and programs is a mess, especially when you consider the number of federal agencies and each individual state departments that somewhat touch upon providing mental health care.

It is a clusterfuck. Except that's an insult to clusterfucks because at least in them, there's the potential of a satisfying ending. This is more of a frustrating cluster-dry hump of some kind.

So for all of those people who are happy to bring up mental health out of concern for saving lives, Oliver has one message to you.

If we're going to constantly use mentally ill people to dodge conversations about gun control, then the very least we owe them is a fucking plan.

More like this
19 Latinx Therapists & Mental Health Experts To Follow On Instagram
By Kaitlyn Wylde, Naydeline Mejia and Lexi Inks
Chris Kaba's Family Continue Fight For Justice After Viewing Police Bodycam Footage
By Sophie McEvoy
Women Around The World Are Cutting Their Hair In Solidarity With Mahsa Amini
By Darshita Goyal
Romance Authors Are Mobilizing For Reproductive Rights
By Natalia Perez-Gonzalez
Get Even More From Bustle — Sign Up For The Newsletter