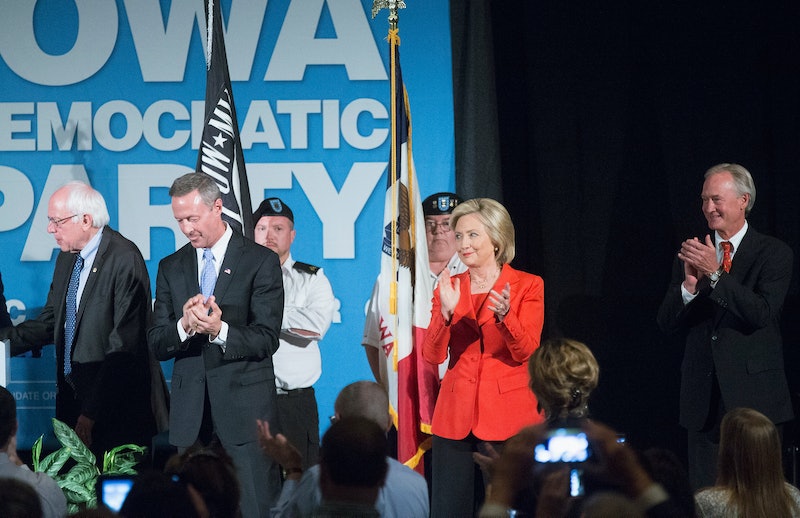 While the right has seen two primary debates come and go, the Democratic Party has been salivating at the chance of seeing their presidential candidates duke it out to hold the highest office in the country. Dems, the wait is over because the first Democratic debate is coming Oct. 13, which means Hillary, Bernie, and the rest of the field will finally be standing side by side on stage to win your votes. Yes, the Dem debate probably won't be as thrilling as the GOP ones, but that doesn't mean you shouldn't tune in. If you're wondering what channel the democratic debate is on, we've got your answer right here.

The debate will air on CNN since the cable outlet is hosting the event, which will be broadcast live from the Wynn hotel and casino in Las Vegas. Nevada is a major swing state, so the choice of venue isn't too surprising. And CNN has promised to unveil plenty of bells and whistles, including live-streaming the event in virtual reality. People with a Samsung Gear VR headset will get to experience what it's like to sit in the crowd, which means, as Colbert points out, your view could go from a clear shot of the candidates to someone blocking your head. #ShortPeopleProblems

Now, the problem is trying to figure out what channel CNN is actually on. For Time Warner Cable subscribers, CNN airs on channel 46. DirecTV viewers, head to channel 202. Dish clients can go to channel 200. For those with Cox, you want to hit up channel 31. Verizon watchers can go to channel 100 for SD quality or channel 600 for HD. And if you're really struggling, you can always channel search in your menu.

Best of luck to the candidates, and also good job to you for finally figuring out where exactly CNN is on your TV guide.