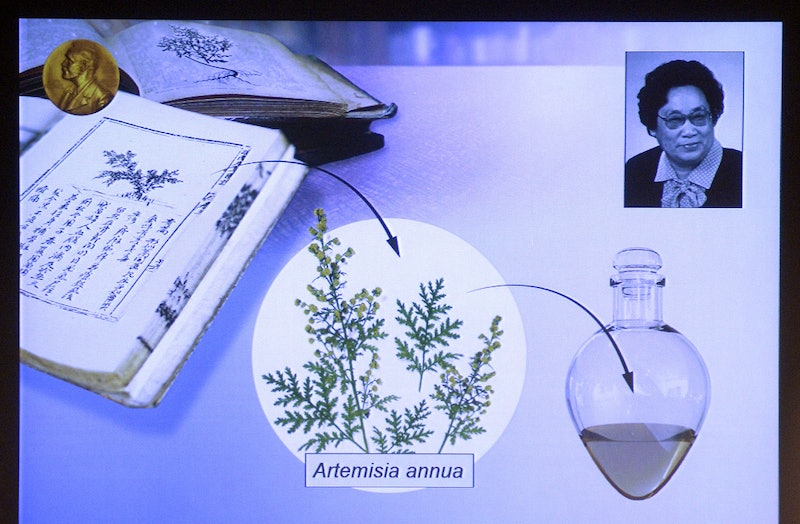 The 2015 Nobel Prize for Medicine has been awarded to three scientists for their collective work battling parasitic diseases. William C. Campbell and Satoshi Omura shared the $900,000 prize with Youyou Tu, the 12th woman to receive the prize and the first Chinese recipient of the award. Tu discovered Artemisinin, a drug that has significantly reduced death rates from malaria. Tu used Chinese traditional herbal medicine to find a new agent that works against malaria. So who is this new Nobel Prize winner? Past interviews paint her as "painfully modest," gracious, and totally inspiring.

The Nobel Assembly at Karolinska Institutet, which awards the Prize in physiology or medicine, said that discoveries that help fight parasitic diseases are crucial because those diseases "affect the world's poorest populations and represent a huge barrier to improving human health." The two drugs discovered by Tu, Campbell, and Omura have had "immeasurable [impact] in terms of improved human health and reduced suffering," according to the Institutet. Tu began her work to find a new malaria drug in the 1960s, during the Chinese Cultural Revolution, when the standard treatment of quinine and chloroquine was losing effectiveness because malaria parasites had developed a resistance to them.

Tu and her colleagues collected 380 extracts from 200 herbs which ancient Chinese medical literature held to be effective. Finally, one plant started to show inconsistent results: sweet wormwood, or Artemisia annua. So Tu extracted the active component of the herb, which was used by Chinese herbalists hundreds of years ago to treat fever, and developed a "highly effective" treatment for malaria in both humans and animals. Estimates say it can reduce the mortality rate of malaria by more than 20 percent, and more than 30 percent in children. In Africa specifically, Artemisinin and a combination therapy save more than 100,000 lives every year.

When no synthetic drugs were found to combat malaria effectively, the Academy of Traditional Chinese Medicine in Beijing appointed Tu to find a cure with herbal remedies. In the early 1970s, Tu was sent to the Hainan province in the far south of China, which was plagued with malaria, to observe the effects of the disease. Her husband had been banished to the countryside at the time, so she was forced to send her four-year-old daughter to a local nursery. When she finally returned to Beijing six months later, her daughter didn't even recognize her. After receiving another prestigious award, the Lasker Award, in 2011, Tu told New Scientist that reconnecting with her daughter was difficult, but that the lives of thousands of people who died from malaria balanced any bitterness she felt:

The work was the top priority, so I was certainly willing to sacrifice my personal life. I saw a lot of children who were in the latest stages of malaria. Those kids died very quickly.

After reviewing more than 2,000 recipes for traditional Chinese remedies, Tu found the Artemisia recipe in a text written more than 1,600 years ago, in a book titled “Emergency Prescriptions Kept Up One’s Sleeve." Tu made some important changes to the recipe, and then found that it was successful on rats. Since she was the head of the research group, she said she volunteered to be the drug's first human test subject, because she "had the responsibility." When her work was published in 1977, she and the other authors remained anonymous because China didn't permit named scientific publication and the achievements of the group were more important than those made by any individual. When she discussed the work with New Scientist, she was still soft-spoken and unbelievably humble:

It is scientists’ responsibility to continue fighting for the healthcare of all humans. What I have done was what I should have done as a return for the education provided by my country.

Tu, who is now 84, is chief professor at the China Academy of Traditional Chinese Medicine. In 2011, she still ran a lab in Beijing where she continued to study Artemisinin. When she received the Lasker Award in 2011, Tu said the recognition was nice, but that it isn't what propels her to continue her work:

I feel more reward when I see so many patients cured.