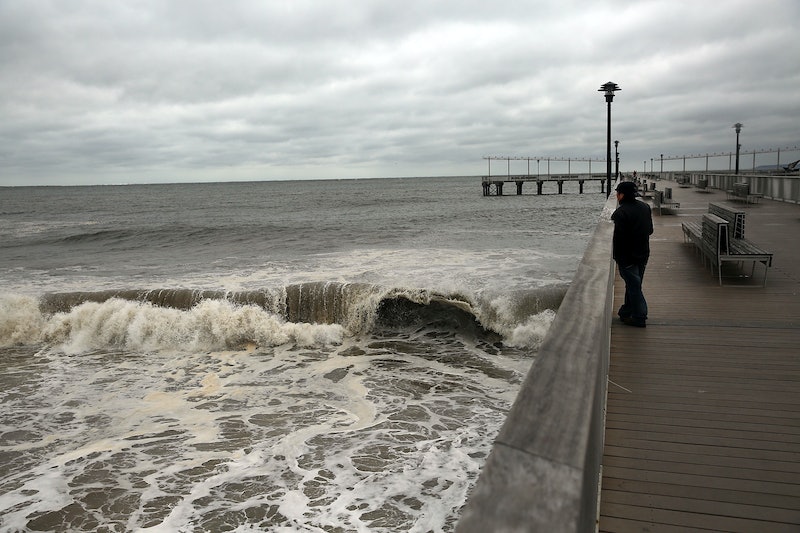 The 790-foot cargo ship El Faro was reported disabled Thursday morning, when the captain signaled that it was taking on water and had lost propulsion. The ship, which was carrying 33 people in the southeastern Bahamas just as Hurricane Joaquin was rolling in, has since been declared missing. What happened to the ship between Thursday and Monday? Search crews began spotting debris Sunday morning, and the Coast Guard officially confirmed on Monday that the ship sank.

Search efforts by the U.S. Coast Guard and Navy and Air Force planes and helicopters were hampered Friday and Saturday because of rough weather created by Joaquin, but they resumed in full Sunday. Coast Guard crews said they spotted about 225 square miles of debris, which included Styrofoam, wood, cargo, and other items, on Sunday, near the last known position of the El Faro. Though a Coast Guard spokesperson told NBC News that it's still unclear whether the debris belonged to the El Faro, search teams have some other evidence that the ship may have succumbed to Joaquin's heavy winds and rough water. On Saturday, searchers located an orange life ring from the El Faro before nightfall forced them to return to land. The Coast Guard also found a container that appeared to be from the ship, and some search teams observed what appeared to be an oil sheen, which is often a sign that a sunken ship rests below the surface somewhere.

On Monday morning, a family member of one of the 33 aboard told CBS that the Coast Guard had recovered a survivor suit with unidentifiable remains. The owner of the El Faro, TOTE Maritime Puerto Rico, spoke with family members of the 33 aboard, which included 28 Americans, on Monday, even though a Coast Guard official said there's still "an active search and rescue" mission for the ship and its crew.

Coast Guard officials said they found a heavily damaged lifeboat with the letters "E" and "O" on it, and that they were searching for another lifeboat. Though the window for finding survivors of a shipwreck — 120 hours — is slowing closing, searchers in Jacksonville, Florida told CBS they are "very optimistic and we were searching very thoroughly in the hopes we would find survivors."

One of the ship's crew members, Danielle Randolph, had emailed her mother last week with an update:

There is a hurricane out here and we are heading right in to it. Category 3. Last we checked winds are super bad and seas are not great. Love to everyone.

Phil Greene, president and CEO of TOTE Services, Inc. told CBS that the El Faro was a sturdy ship, built to survive the rough seas off Alaska. He said that the captain of the ship seemed confident that he and his team could handle the weather brought on by Joaquin:

On Wednesday he sent a message to the home office with the status of the developing tropical storm he said he had very good weather ... and that his crew was prepared.

The names and identities of all the crew members have not yet been released. Meanwhile, the Coast Guard continues its search for survivors.