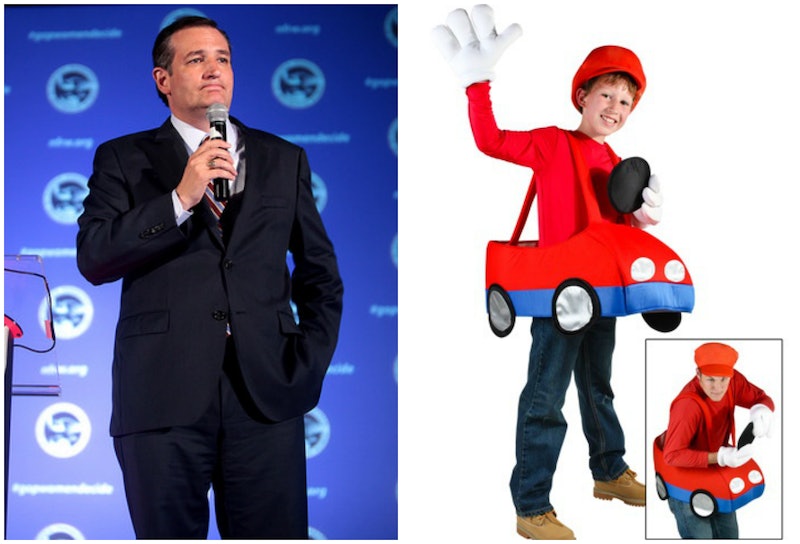 With Halloween swiftly approaching, it's important that you get your costume nailed down now, before everyone else steals the best ideas. But while all your friends and family are at the local discount party store picking up nylon capes, cat ears, and inflatable dinosaur suits (look it up, seriously), what's a politically-minded news junkie like you to do? Assemble a punny and clever political costume from the items in your closet and a few thrift store finds, that's what.

Of course, you could go the easy route and just pick up one of those "sexy Donald Trump" costumes (shudder), but there are far better ways to go about cracking a 2016 election joke without donning a pair of hot pants in 40-degree weather. Don't be afraid to get creative, either — with primaries coming up in the spring, lots of people will be dressing up as their favorite candidates, and you definitely want to win that "Best Costume" award.

"As we've seen for several years, Hollywood and pop culture both have a tremendous impact on how adults and their children decide to dress the part each Halloween, and it's evident some of the biggest newsmakers of the year will be out in full force this fall," explained National Retail Foundation President Matthew Shay in an interview with CNBC last month.

With that in mind, here are a few especially clever ideas to help you stand out from the crowd.

This one's easy. Pantsuit or business clothes? Check. Smartphone? Double check (bonus points if you still use a Blackberry). All that's left now is to put on a pair of black sunglasses, don a "Hillary 2016" campaign button, and hold a beer bottle in the other hand. Next step: Relax on the couch at your friend's Halloween party all night. Super chill.

Okay, bear with me on this one. It might be a stretch, but for those of you who hang out among the more politically minded, it could just work. With this affordable Target brand Santa suit as your base, build up the Rick Santorum look by slicking your hair back, donning a tie and flag pin, and carrying around a [preferably empty] rum bottle. Feel free to give dirty looks to anyone who doesn't get the joke.

Using a black Sharpie, write as much of the Second Amendment as possible on a cheap white tee shirt, then tape or pin teddy bears to your sleeves. Boom — now you're officially the "right to bear-arms."

Grab a pair of black robes either from your old college or high school graduation ceremony or from the local costume shop (Harry Potter-esque robes will do in a pinch — just remember to tuck in the hood) and a bib necklace or lace collar. Next, add in details from your favorite badass lady, like the clever girl in the above photo (Khaleesi fans rejoice!), and march into the room with an attitude that screams, "Don't mess with me, or I'll cut you."

Own a business suit? You're halfway to completing your punny Ted "Cruise" costume. The only other step involved in assembling this clever costume is to find an old cardboard box and make like you're in preschool by using paint to construct your own car (hoist it over your shoulders using some twine or elastic straps). Or, if you don't feel like going to the trouble, you can just buy one. Don't forget to walk around looking like you're ready to break into a political sermon at any point.

This one requires a little extra construction time, but it's really not that difficult. Decorate a cardboard sheet or two to look like graham crackers, then slip into your most official-looking business suit and hang the cardboard sheets over your shoulders with a comfortable strap. Flag pin (and southern drawl) optional. Wear a look of sadness from being shunned to the kiddie-table debate.