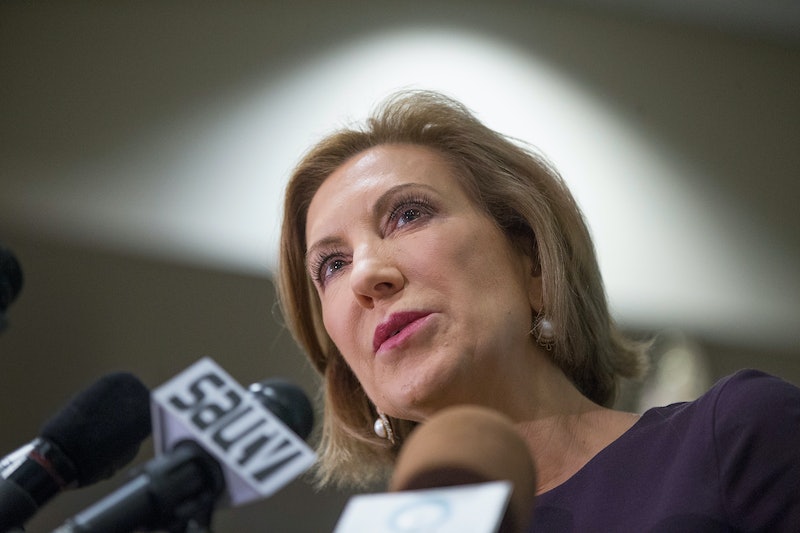 During an interview Monday, Republican presidential candidate Carly Fiorina said she wants Cecile Richards to quit her position as head of Planned Parenthood. Fiorina's remarks, made to Boston Herald Radio, don't come as that much of a surprise. Ever since delivering a chilling statement on the women's health organization during the second Republican primary debate, Fiorina has made denouncing Planned Parenthood a staple of her campaign, and it appears that Richards is now included in the attacks.

Cecile Richards can step down, she probably should step down, but unless something fundamental changes, that we stop funding these people with taxpayer dollars, that they are actually investigated and prosecuted, the reality is nothing’s really going to change.

Like pretty much everything else Fiorina has had to say on the subject, this idea is ridiculous. Richards has spent the past summer fighting an onslaught of public outcry after the release of several misleadingly edited videos alleging that the organization sells fetal body parts. And Fiorina's debate performance, which referenced a video that depicted "a fully formed fetus on the table, its heart beating, its legs kicking, while someone says we have to keep it alive to harvest its brain," has not helped Richard beat back the flames of public rage.

The video that Fiorina claims to have seen, however, does not exist. At least, no one can find it, and Fiorina herself can't even produce it. The outstanding general consensus is that the video in question is actually of a stillbirth miscarriage — a gruesome and horrifying situation, but not an abortion. When backed into a corner, Fiorina and her campaign were unable to produce the original video, and instead opted to produce their own badly edited video depicting images of a stillbirth — which were used without the mother's permission. But Fiorina insists she's not lying about the video or Planned Parenthood's practices.

The attacks have become part of her standard stump speech. During speeches and events, Fiorina has begun asking the crowd, "Why is it Planned Parenthood cannot and will not deny late-term abortions are being performed for the purposes of obtaining brains and other body parts? Because it’s happening. It’s happening."

But the overwhelming evidence, as well as three congressional investigations, have established that it isn't happening. So just in case you haven't realized it yet: Fiorina's rhetoric is actually kind of absurd.

And Richards has done nothing to deserve calls for her resignation, aside from doing her absolute best to defend the organization from repeated attacks. In September, Richards was called upon to testify in front of Congress regarding the use of Planned Parenthood's funds, and whether they profited from the sale of fetal tissue. But instead of being allowed to provide testimony as to why the organization is crucial for women's health, Richards was subjected to several hours of attack and interruptions by belligerent representatives. She was questioned repeatedly about the amount of her own salary and Planned Parenthood expenses, without being allowed to answer. Over the course of her testimony, she was interrupted 44 times.

Carly Fiorina isn’t one to talk about leadership. From laying off 30,000 workers, to her company’s stock falling 55 percent after a failed merger, to taking a $42 million golden parachute, and refusing to pay her campaign staff, Fiorina is a failed leader who has always put herself first. Her recent criticism of Planned Parenthood — a trusted, affordable health care provider that helps women get the care they need and deserve — is one of many pathetic attempts by the GOP to undermine women's health.

In the candidate's defense, there is one very good reason why she would want Richards to step down: Richards has gotten very good at disproving her comments. And repeatedly being caught in a lie can make a candidate look bad. Just a little.