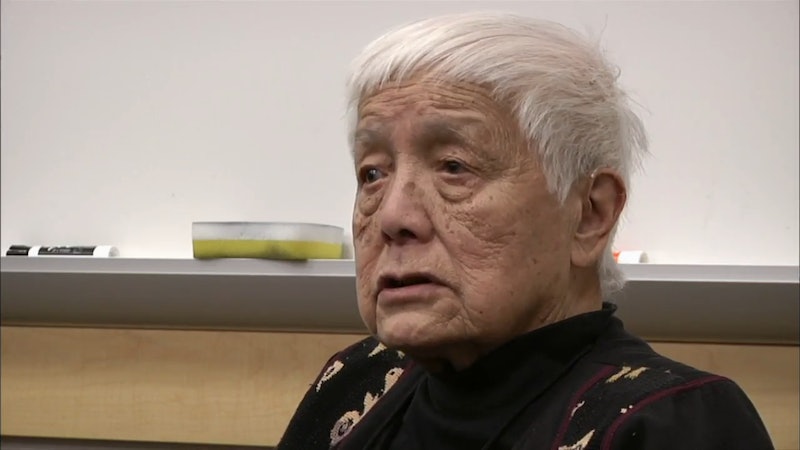 It's a wonderful homage to a remarkable woman, and the PBS documentary about activist Grace Lee Boggs can be streamed online. Boggs, a civil rights activist, philosopher, and writer, passed away on Monday at age 100 after a lifetime of achievement. American Revolutionary: The Life of Grace Lee Boggs, directed by filmmaker Grace Lee, explores the life and achievements of Boggs, a Chinese American who first advocated for civil rights in the 1940s and later abandoned Marxism to become an unlikely spokesperson for the Black Power Movement. The documentary teaches the viewers how this important woman defied racism and sexism to fight for equality.

The film explores Boggs' life from her birth in New York, through her activist work in the '50s and '60s, up to her speaking and writing career in Detroit in the later part of her life. Born in 1915 to immigrants from China, Boggs excelled at Barnard and Bryn Mawr Colleges, where she studied philosophy. She became a follower of philosophers Marx and Hegel, who used history to criticize contemporary society. Because of her race and gender, she was unable to find work on the East Coast, and eventually moved to Chicago to work at the University of Chicago's Philosophy Library for $10 a week, according to the Detroit Free Press. There, she became active in advocating tenants' rights and interested in socialism. She helped found a Socialist Workers' Party branch in New York before moving to Detroit to write for a socialist newspaper. There, she met her husband, James Boggs, an African American activist and writer from Alabama. They married in 1953, almost 15 years before the Supreme Court confirmed the rights and safety of interracial couples.

Her remarkable achievements are numerous and documented in detail in the film. Once she married James, Boggs became even more active in the black community's fight for civil rights. Fellow activist and scholar Angela Davis once said, "Grace has made more contributions to the black struggle than most black people have." Boggs befriended Malcolm X and encouraged him to run for Congress. In addition, she became a proponent of Asian American, feminist, and environmental causes. She has written five books, including a memoir entitled Living for Change.

After her husband passed away when she was 78, Boggs did not slow down. In the last part of her life she continued to speak publicly and write about revolution and civil rights. She founded a charter school in Detroit in her and her husband's names following his death in 1993. At age 90, she began writing a weekly column for Detroit paper the Michigan Citizen, which she continued for eight years.

Lee's documentary features interviews with actor Danny Glover and several prominent residents of Detroit, Boggs' adopted hometown, plus archival footage of Davis, journalist and former White House Press Secretary Bill Moyers, and other admirers of Boggs. It analyzes conversations within the Civil Rights Movement, including the debate between Dr. Martin Luther King Jr. and Malcolm X, and Boggs' own shifts in ideology after the Detroit riots of 1967.

Any history buff with a special interest in feminist, African American, or Asian American civil rights will love the detailed account of each movement. Boggs herself is witty, passionate, and even funny in many moments. It's a great tribute to an admirable woman who spent a century trying to make her country a fairer, more welcoming place for all. The full film runs for 1 hour, 22 minutes and is available for streaming on PBS.org.