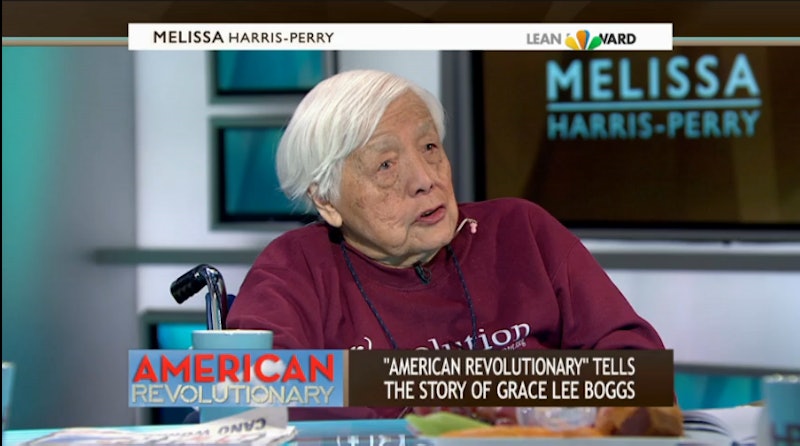 Eminent human rights advocate, writer, and philosopher Grace Lee Boggs died this week, bringing to a close a life that spent seven decades at the forefront of some of the nation's deepest movements for social change. Boggs worked as a community activist and organizer for civil rights, labor, women's rights, the environment, and a host of other issues. As a renowned public speaker and lecturer, her views on social change and activism have inspired generations of revolutionary thinkers. You can watch one of Boggs' last public appearances online. If you're unfamiliar with her work, it's exactly the video that you should watch to understand why she's an icon.

Born to Chinese immigrant parents in 1915, Boggs graduated from Barnard College, and went on to get her PhD in philosophy from Bryn Mawr in 1940, according to the biography on her official website. Boggs then moved to Detroit, where she worked on the black Marxist, civil rights, and Black Power movements alongside history's most renowned social activists, including Martin Luther King, A. Phillip Randolph, Malcolm X, and autoworker James Boggs, whom she went on to marry.

As one of the nation's most respected and beloved philosophers, Boggs wrote and spoke publicly about social change until she was well into her 90s. But this 2013 MSNBC interview offers the perfect snapshot of the enormity of her impact.

In November 2013, Boggs was a guest on MSNBC's The Melissa Harris-Perry Show to discuss her life as a revolutionary and the history of activism in America. She was joined by filmmaker Grace Lee, who had just completed a documentary film based on Boggs' experiences, called American Revolutionary: The Evolution of Grace Lee Boggs. Perry and Boggs discussed the continued importance of revolution and rebellion, including this incredible perspective from Boggs on the difference between the two:

In 1967, I'd been in the radical movement for nearly four decades and I'd never felt the need to distinguish between a rebellion and a revolution. But when we tore up [Detroit] and people called it a revolution, I thought, "We really have to figure out what a revolution is as distinct from rebelling, from just protesting." And it was that time we began to think about revolution as an evolution of humanity, as something that's not just taking place in institutions, but taking place inside our souls. Something very personal, very spiritual that's happening.

The interview continues for another seven minutes, with Boggs offering insights on the place of revolution in the 21st Century, and its importance to individuals hoping to live a meaningful life:

The idea that revolution means to live meaningfully and to create solutions for daily issues, that's amazing, I think. It changes the mindset of the whole population. And I think we in this country can contribute that view of revolution to the whole world.

More like this
Prince Harry Incorrectly Recites Christina Aguilera’s “Genie In A Bottle” Lyrics
By Jake Viswanath
6 Organizations Fighting Police Brutality That You Can Support Right Now
By Syeda Khaula Saad and JR Thorpe
Here’s Where The NHS Nurses’ Strike Currently Stands
By Sophie McEvoy
8 Charities To Donate To During Black History Month
By Alexis Morillo
Get Even More From Bustle — Sign Up For The Newsletter
From hair trends to relationship advice, our daily newsletter has everything you need to sound like a person who’s on TikTok, even if you aren’t.