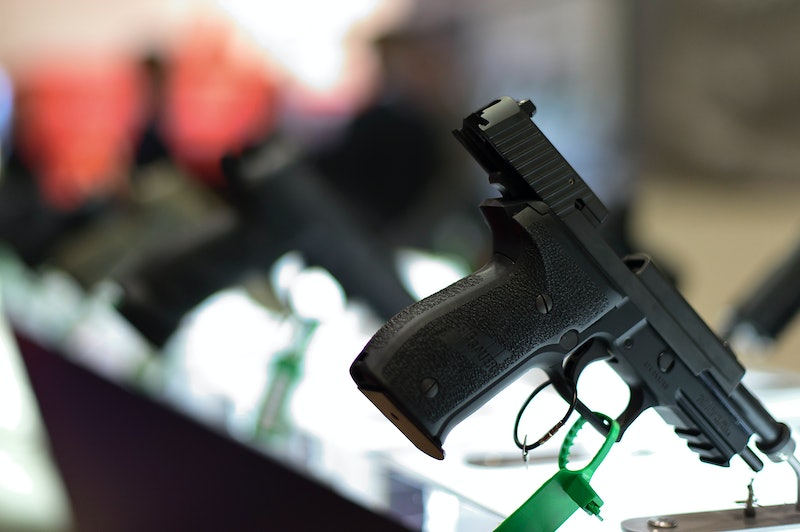 On Thursday, yet another mass shooting occurred, this time on the Umpqua Community College campus. The shooting resulted in 10 deaths, including the gunman, and a renewed national dialogue around the need for gun control. Though often discussed from the crucial angles of public safety and mental health, gun control is seldom regarded as the feminist issue it arguably is, The Guardian points out. It's rarely taken into account that not only are many acts of gun violence performed in the context of domestic violence, according to Bloomberg, but some recent mass shootings have also been reportedly motivated by misogyny. Some psychologists have even identified pervasive societal concepts about hyper-masculinity as motivating factors in mass shootings, which are predominantly carried out by male shooters.

Allowing men with histories of domestic abuse to obtain guns, or not performing thorough background checks that could reveal violent histories, exposes women to be disproportionately victimized by gun violence. A study published in 2013 by the University of Washington revealed that a strong majority of mass shootings in America were carried out by white males and found a "correlation between feelings of entitlement among white males and homicidal revenge against a specific demographic." One of feminism's overarching goals is to check the destructive consequences of male and racial privilege in society, and according to the 2013 study, gun violence is arguably among these. Simultaneously, in many recent cases, the "specific demographic" in question is often racial minorities or women.

In July, after leading a mass shooting at a screening of Trainwreck in a movie theater in Lafayette, Louisiana, it was revealed that John Russell Houser, the gunman identified by police, had a history of violence toward his wife and daughter and misogynistic tendencies that potentially motivated him to carry out the shooting. According to the Associated Press, Houser's estranged wife once had to remove guns from their home and had him committed, alleging he was "a danger to himself and others" and citing his "threatening behavior" in protesting their daughter's wedding. Although Houser never directly proclaimed or recorded his motive, it's certainly worth noting that he selected the predominantly female audience of Trainwreck, a feminist comedy written and produced by a famous feminist comedian, to conduct his shooting spree.

Houser legally obtained the gun that he used to kill three (including himself) and injure nine, according to CNN, despite a history of allegations of threatening his wife and daughter, mental health issues, and posts inciting religious extremism from social media accounts associated with him. In some of these posts, Houser seems to have praised the anti-LGBTQ Westboro Baptist Church and shared links to misogynistic web pages discussing the roles of women in the church.

The International Business Times reports that according to CNN investigative correspondent Drew Griffin, a background check had been performed on Houser prior to selling him firearms, but his record lacked any convictions for serious crimes, despite domestic violence allegations and minor legal issues. Thus, Houser simply did not raise any red flags on the "instant background checks" performed on him. Griffin's findings points out two immediate concerns: the first being that domestic violence simply isn't taken seriously enough, and the second being that in many cases, background checks for gun purchases aren't thorough enough. Two women paid the price for gun control shortcomings in a shooting that was potentially motivated by one man's misogyny.

In May 2014, 22-year-old Elliot Rodger killed six and injured 14 in the notorious Isla Vista shootings in California, as he attempted to carry out his "retribution" against women for rejecting him, as well as sexually active men he envied. In a disturbing video Rodger posted prior to the shootings, he claimed he would "slaughter every single spoiled, stuck-up, blond slut [he saw]," according to the LA Times. In the video, Rodger also voiced his sense of entitlement to sexual favors from women, believing all women deserved to be punished for "rejecting" him. In a 140-page manifesto, Rodger went so far as to propose all women be kept in concentration camps, as if it weren't clear enough his actions were rooted in deep-seated misogyny.

According to the Los Angeles Times, all three guns registered under Rodger's name had been obtained legally. Parents of Rodger's victims placed blame on the NRA and politicians above Rodger himself for not carrying out safe gun control regulation, and gun control proponents pointed out that doctors as well as Rodger's parents had issued warnings about his mental health, according to NBC News. The Isla Vista shootings serve as a clearer example of how gun control could prevent violence that disproportionately targets women.

More recently, in September, two Delta State University professors were shot and killed by one professor's live-in partner, identified as Shannon Lamb. Guardian columnist Jessica Valenti pointed out that the shooting was rarely referred to the act of domestic violence that it was. "Until we start talking seriously about the intersection of gun violence and intimate partner violence, we will continue to watch as murders — many of them preventable — are perpetrated again and again," Valenti writes. And indeed, according to Bloomberg, of all women murdered by intimate partners between 2001 and 2012, 55 percent were killed with guns. Bloomberg also reports that women in the United States are 11 times more likely to be killed with guns than women in any other "high-income country." Most disturbing of all, a strong majority of guns involved in such acts of violence are obtained entirely legally.

Obviously, women aren't the only people affected by gun violence, nor are they the only group who would benefit from stronger gun control laws. Domestic violence appears to be more of a strong risk factor of loose gun control than a direct consequence of it. However, there is no denying that gunmen involved in mass shootings are frequently white males: between 1982 and 2012, all but one mass shooter were male, and in 44 of 62 case, the shooter was a white male. The desire to kill many is often rooted in some mental instability, but as Tanya Luhrmann, an anthropologist at Stanford University, points out, "Mental illness actually does reflect the local culture."

Tendencies toward violence are subtly rooted in how men are brought up by society, which arguably glorifies aggression in males. And as multiple studies reveal, a sense of born entitlement develops naturally in boys, who are more likely to feel unjustly wronged and respond with violence than females who encounter rejection and hardship. The simple fact is that an ingrained sense of male entitlement isn't going anywhere, but gun control is a critical feminist issue as it could check the tragic consequences of male entitlement turned violent.