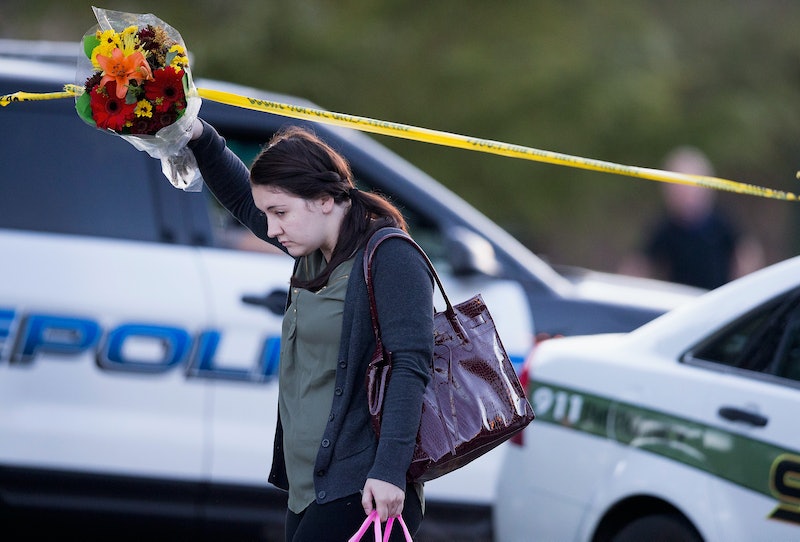 By the time this is published, another mass shooting will have taken place in the United States — and possibly, another mass killing. As of Oct. 2, there have been 297 mass shootings in the United States in 2015, and 45 have been mass killings. More than once a day, someone fires a gun and injures three or more victims — and sometimes, those injuries are fatal. Last week's horrific shooting in Roseburg, Ore., stood out due to the high number of casualties, the setting, and the everyday heroism of people who found themselves in the wrong place at the wrong time. But as we know, it is not unique.

This is a nation in which schools, movie theaters, political events, and gyms aren't safe. Such acts of rampage violence are followed by a host of op-eds, usually harping on how nations with strict gun control laws — Australia in particular is making the rounds this time — don't experience these kinds of horrible incidents on the level that the U.S. does.

This is an extremely simplistic solution to the very complex problem of violence in America. Lecturing from overseas doesn't apply to the situation the United States faces, and it distracts from the larger cultural issues we need to address. This is about gun culture, yes, but it's also about a culture of violence, and a culture of misogyny. And these are not things we can fix with gun control alone.

The United States isn't like Australia, isn't like Japan, isn't like Norway. Which is a good thing, because when you look at mass shooting fatalities per capita, the U.S. is actually sixth on the list — behind Norway, but also Israel, Switzerland, Slovakia, and Finland. These are apples and oranges comparisons, because the gun is just a symbol for the violence that kills people, to crib from the NRA — a group founded, incidentally, to promote gun safety and responsible gun ownership, including advocacy for gun control laws, and one that has warped far from its original mission.

If we want mass shootings to stop, we need to stop the men who commit them by changing the culture of masculinity in America.

This is a country of the gun. The gun hearkens back to a deep and complicated part of the American psyche, from Manifest Destiny on forward. Guns are bound with the ugly facets of colonialism, but they are also part of the American bootstrapping identity, one of fierce independence and will. To own a gun, many boys are told, is to be a man. A gun is not just a powerful tool, young men are told, but evidence of their power. Guns are needed, they are told, for self-defense. It doesn't matter who shot first, as long as you shoot last. None of these are good things, but they are tied up in identity for many Americans.

This is why Americans love their guns in a way that cannot be adequately articulated in other nations. And I say this non-judgmentally — I'm a gun owner myself.

I enjoy both hunting for food and sport shooting at inanimate objects on a secured range. And yes, I love the feel of a gun. I also support responsible gun ownership and tighter gun control, including limitations on the sale of certain types of weapons, more stringent background checks, tighter controls on conceal carry permits, and gun-free zones. I don't need to own machine guns. I believe that if you restrict the number of guns available and make them harder to obtain, there are going to be fewer shooting deaths — it's basic math. Clearly, the United States needs more aggressive gun control.

This is a violent country. In the same time period that 297 mass shootings occurred, 884 people were killed by police. This, too, is a symptom of societal violence, of the unaddressed issues that lie deep at the heart of the American ethos. A horrific 11,208 Americans were killed by guns in 2013. People open fire on other people because they come from a culture of violence, and guns happen to be an extremely efficient method for killing people — just like sarin was in Tokyo in 1995, just like bombs were in London in 2005.

If we choose to address the crisis of violence merely by restricting access to guns, I believe it's sarin, bombs, IEDs, and other weapons that we will be seeing instead. People who want to commit acts of rampage violence will keep doing it — except that this time, it will be gas filtering through a movie theater, a bomb rocking an elementary school. This is not to say that gun control wouldn't help — only that it's not enough.

Because this is also very specifically a crisis of male violence. Most mass shooters are white men, often in their 20s. Their acts of violence tie into larger societal structures when it comes to how we view and talk about male identities. This is a legitimate case of "What about the men?" If we want mass shootings to stop, we need to stop the men who commit them by changing the culture of masculinity in America. Deconstructing the narrative that associates violence with masculinity, and raising young men to turn away from violence rather than using it as a tool, is a good start. Men who reject violence shouldn't be the subject of gendered epithets about emasculation, but instead celebrated.

Much of this violence is heavily rooted in misogyny. Congresswoman Gabby Giffords was shot as a symbol of the government by a man who loathed it — but it's notable that he chose a female victim, given the statistical representation of women in Congress. Elliot Rodger's victims were shot very explicitly because of his hatred of women. We know this because he told us so. Many other acts of rampage violence are committed against women, and that doesn't delve into personal violence statistics. Women and girls are five times more likely to experience intimate partner violence than men. Seventy percent of those killed by their intimate partners are women. Violence against women is a much bigger problem than rampage shootings in America — and the fact that many rampage shootings target women only serves to underscore this. Despite the fact that only 15 percent of homicide victims are women, 50 percent of victims in mass violence incidents were women and girls — usually in domestic violence situations when partners open fire on their families — according to a study conducted by Everytown for Gun Safety earlier this year.

Yes, obviously we need better gun control. But I'm tired of people, in the U.S. and abroad, who believe that programs like those seen in Australia and the U.K. will solve the crisis of violence and death in this country. Limiting access to guns will undoubtedly prevent some deaths, which is a very good thing. But the discussion over gun control distracts from a more important debate: How do we fix our violence problem, in all its forms? If we restrict access to guns but don't address the misogynistic violence that motivates many rampage shooters and killers, we'll simply be looking at another landscape of death.