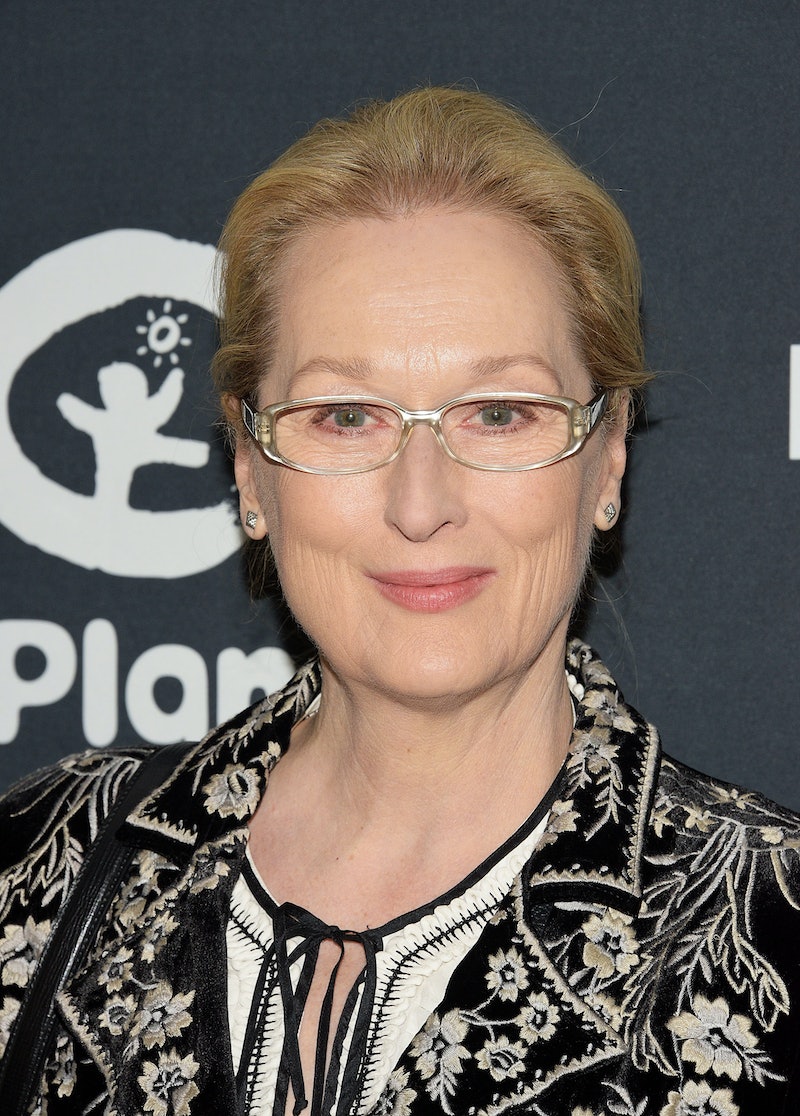 Oscar-winning actress and equality advocate Meryl Streep was the talk of social media on Monday because of a photo connected to her upcoming project on the women's suffrage movement. Streep will portray political leader Emmeline Pankhurst in the British film, Suffragette, scheduled for release in the U.K. later this year. Photos of an Emmeline Pankhurst quote on Meryl Streep's Suffragette shirt caused an uproar because it said: "I'd rather be a rebel than a slave." While the wording was meant to inspire women to continue fighting for the right to vote, the connection to slavery and racism for American audiences made the photo a complete misfire.

Streep and other Suffragette cast members appeared on the cover of Time Out London's Sept. 29 issue to promote the upcoming movie. Streep and her three female co-stars all wore the same white T-shirt with the Pankhurst quote printed in bold black lettering. Streep herself talked to Time Out about her connection to the feminist movement, oddly distancing herself from the term and saying that she considered herself a humanist in favor of a "nice easy balance."

Though Streep has called out the underrepresentation of women in film and been a staunch advocate of equality overall, ignoring the double-meaning of Pankhurst's words evoked a deeply held divide within the feminist movement.

The quote comes from a speech Pankhurst delivered in 1913, according to The Guardian. Here are the feminist leader's famous words, in their entirety:

Those familiar with Pankhurst might have made the connection, but some American readers wondered why Streep would choose to wear a shirt with the racially-charged terms "rebel" and "slave."

What's even more unfortunate is that — as one of the most important figures in the British women's suffrage movement — Pankhurst has given the world a litany of powerful quotes on why female equality is critical. These seven quotes span Pankhurst's famous speeches, essays, and books — and any one of them could have supported Streep's own considerable history of advocacy on equality issues.

"Be militant each in your own way." — from Pankhurst's first public address at the Royal Albert Hall in London on Oct. 17, 1912

"I incite this meeting to rebellion." — from Pankhurst's first public address at the Royal Albert Hall in London on Oct. 17, 1912

"Deeds, not words, was to be our permanent motto." — from My Own Story

"We have to free half of the human race, the women, so that they can help to free the other half." — from The Suffragette: The History of the Women's Militant Suffrage Movement

"Men make the moral code and they expect women to accept it." — from My Own Story

"Justice and judgement lie often a world apart." — from My Own Story

"As long as women consent to be unjustly governed, they will be." — from Pankhurst's speech in Hartford, Connecticut on Nov. 13, 1913

More like this
24 History-Making Black Women You Probably Didn't Learn About In School
By Ayana Lage and JR Thorpe
25 Inspiring Quotes From Black Women To Celebrate Black History Month
By Kyli Rodriguez-Cayro and JR Thorpe
6 Organizations Fighting Police Brutality That You Can Support Right Now
By Syeda Khaula Saad and JR Thorpe
Here’s Where The NHS Nurses’ Strike Currently Stands
By Sophie McEvoy
Get Even More From Bustle — Sign Up For The Newsletter
From hair trends to relationship advice, our daily newsletter has everything you need to sound like a person who’s on TikTok, even if you aren’t.