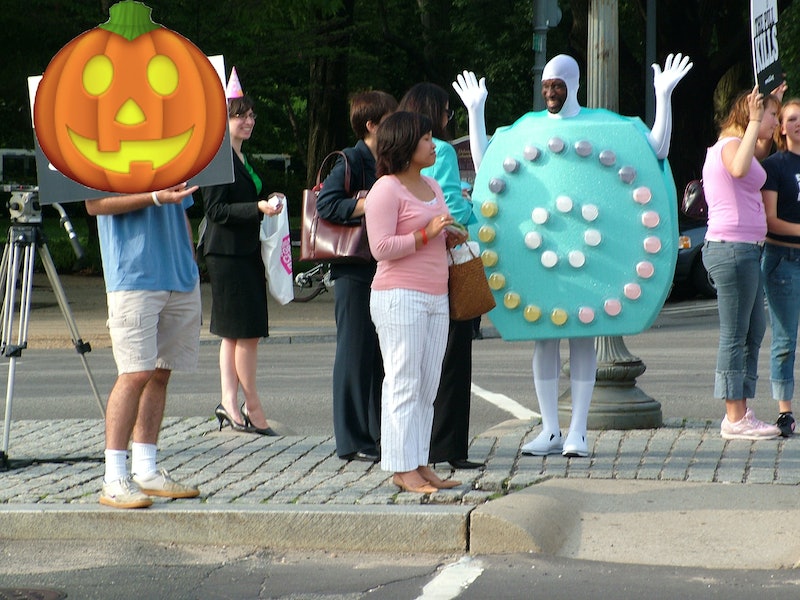 As Oct. 31 draws closer, I'm sure you've seen plenty of costume ideas for women who want to dress up as their favorite TV show character, put together the perfect group costume, or throw out an homage to the dress that broke the Internet, but how many have seen Halloween costumes for women who love politics? It's time to take back the political arena ladies, one costume at a time. You're going to have to get creative though, unless you want to buy a sexy Donald Trump costume and live with the memory of this Halloween for all your years.

Don't limit yourself to the narrow-minded costumes you'll find at the Halloween superstores. Dig deep and make your own truly amazing DIY Halloween costume. This is a great year to get political for Halloween, as we get ready to gear up for what will likely be a historic election. Your costume will be sure to stand out amongst all your friends who are dressed as dead Jon Snow or the infamous pizza rat. And don't worry — you will be equally as trendy as you stroll into the Halloween party in your meticulously put together Hillary Clinton costume.

In case you need some help with the brainstorming part of your costume, here are 31 costume ideas for women who love politics and some helpful hints of how to put them together.

You didn't think you could just be plain HRC, did you? There are about 10 derivations of the Clinton costume you can go as, but none are as iconic as the photo of her texting.

Bonus Points: Send your friends emails with very long subject lines asking them to bring you a beer or gefilte fish.

You can go with your Clinton pun of choice (such as Chillary Clinton), but Grillary Clinton is not to be underestimated.

People love Clinton's campaign sign because it's so adaptable — so adaptable that it can even be a Halloween costume.

How To: Trace Clinton's logo onto a large piece of cardboard, then cut it out. Feel free to color it in with her trademark blue, make it rainbow for equality, or make it represent you! Attach it to string and wear it over any outfit.

This costume requires several people to pull it off and a whole lot of pantsuits. Or at least some matching pants and jackets. But when you and all your friends want to be Clinton for Halloween, this is the only logical solution: recreate the pantsuit rainbow.

What You Need: At least four friends; Various colors of pantsuits, $60, Amazon

I told you there were many types of Clinton costumes, and this is by far one of the more obscure ones. If you've seen Clinton's campaign 404 page, you know it's an adorable picture of the Clinton family with Donald Duck.

How To: Cut the blue and white construction paper into circles, and then tape them to the hat. If you want to give people a hand figuring out who you are, maybe add a "404" name tag.

Democrats aren't the only ones with a built-in costume this year! Republicans can show their Carly Fiorina support by dressing up as the former Hewlett-Packard CEO.

This is the perfect costume if you want to "draft" Joe Biden for a presidential run. Everyone is on edge, waiting to see if he'll announce his presidential campaign. If you're a Biden supporter, this is the costume for you. I suggest going for a football themed approach — you can make it comfortable or spice it up and make it sexy.

How To: If you're using a generic jersey, write "BIDEN" on the back. Where the numbers should be, put "16."

Who says you have to dress up as a woman for Halloween? With a Bernie Sanders costume, it's less about the get-up and more about the demeanor.

What You Need: This handy guide on how to make seven Bernie Sanders costumes.

Bonus Points: When people ask you questions, just reply with numbers and percentages. The more percentages, the better.

9. Elizabeth Warren, Not Running For President

If you're tired of hearing the media ask whether Elizabeth Warren will run or not, this costume is perfect for you. It's also quite easy. Warren's a pretty laid back lady, so feel free to go for comfort.

How To: Wear a sign saying "I'm not running for president." See if your friends can guess who you are. Look very frustrated all evening.

Remember this summer when Missouri Sen. Claire McCaskill tweeted out a picture of her shotgunning a beer? Yeah, I do too, and it was the best thing ever. This costume is very easy, super comfortable, and a subtle shout out to everyone's favorite congresswoman.

There is no costume classier than the First Lady of the United States. And while you are welcome to carry around vegetables, there is no need for a gimmick with a Michelle Obama costume. Go classy and simple.

Her filibuster may be over, but Wendy Davis will never be forgotten. Emulate this champion of reproductive health this Halloween to remind your friends that fighting for women's health is more important than ever.

It's been a rough few months for Cecile Richards and all of Planned Parenthood. And I bet they could use some support by seeing some awesome Richards costumes. For a tag-team costume, have a male friend in a suit follow you around all night and interrupt you every time you try to speak.

You "Bader" believe that this is actually what I will be this Halloween. The genius of a Ginsburg costume isn't just dressing up as your hero, but the fact that you now have built in permission to drink liberally and fall asleep if you get bored. Be sure to wear your hair in a pulled back bun.

So it turns out that your best friend was also going to be Ginsburg, because it's the best costume idea ever. No worries! Spread the love, grab two more friends, and you can all go together as RBG, Sandra Day O'Connor, Sonia Sotomayor, and Elena Kagan.

What You Need: Basically just recreate Ginsburg's costume, but lose the glasses. For scarves, try a white collar, or neckerchief to switch up the look.

The Fox News channel host earned a lot of cred this summer after her wonderful performance at the first Republican primary debate, as well as her ensuing feud with Donald Trump. But no matter what you do, absolutely do not go as Megyn Kelly's bloody tampon, unless you want to be the worst human being ever.

While any first lady would make a noble Halloween costume, if you're a history nerd who wants to combine your love of politics and women's rights, Abigail Adams is a great costume. Adams was an early advocate of women's rights and urged her husband to think about American women while drafting the Constitution. She should get points for trying. Maybe not the sexiest costume, but definitely the most historical.

No need to pick a specific candidate for this costume — because you are the candidate. Go as the first female president, and revel in your glory.

Bonus Points: For extra believability, get some male friends to wear shades and black suits and follow you around as your Secret Service.

Discussion of women's rights is at an all-time high, so why not honor the women who started the fight? You can dress as your favorite suffragist, or go general. There are several ways to make this costume, but it'll totally be worth it, no matter what you do.

How To: To make the sash, get a plain white sash and use iron-on letters to write "Votes For Women." Then, keep it forever.

Some people may tell you that this costume is overrated. They are wrong. You are an iconic symbol of feminism, and don't let anyone say otherwise.

Who says your costume can't be a political statement? Dress up as the Equal Rights Amendment to remind your friends that everyone needs equality — even guys, so they can dress up as sexy Donald Trump too someday.

How To: Using the fabric marker, carefully trace the letters ERA to the front. I recommend making them purple and gold. For the back of the shirt, write the full text of the ERA (or have a friend with nice handwriting do it). That way when people ask you what the ERA is, you can just turn around and drop some truth knowledge on them.

She got such a nice shout-out from Carly Fiorina during the Republican debate, it seems like she should have a comeback this year. Also, she's kind of badass.

How To: To make the scales, take two paper bowls and attach four pieces of cord around the outside of each. For the hand grip, use an empty paper towel roll another long, thin object, and tie the cords to either side. For best results, have one paper plate hang longer than the other. Once everything is secure, spray paint it all gold. For the blindfold, use a long piece of ribbon.

Pro Tip: Remember that Lady Justice's blindfold and sword do not mix well with tequila shots.

As someone who has dressed like Leslie Knope for the past two Halloweens, I couldn't leave everyone's favorite politically active fictional character off the list. Best way to emulate Knope is to ditch Halloween early and go get some waffles.

Nope, not the Shrek character. Are you very passionate about the Democratic Party? Show your donkey pride.

Maybe you are a loyal member of the GOP and also happen to love elephants. This is the perfect costume for you — and you'll be just as cute as all the babies also sporting your costume.

Pro Tip: Don't even try to look cute as an elephant. Embrace the comfiness.

Everyone has a cat costume just waiting to be made. Why not combine it with your political affiliation? I can guarantee it is the only type of cat costume you won't find duplicates of this Halloween.

The Treasury Department is trying to figure out which woman they should put on the $10 bill. Clearly the answer is you, because you are a national gem.

What You Need: This handy step-by-step woman on the $10 bill costume guide.

28. The Declaration Of Independence

Some may call it lazy, but I think that dressing as the Declaration of Independence is a very noble Halloween goal. It's historical, patriotic, and also a nice feminist nod to ladies taking Halloween night by storm by themselves.

What You Need: T-shirt; Willingness to be confused for the Constitution and argue about the Bill of Rights all night

Is wherever she wants to be, but for this costume the correct answer is "in the House, Senate, and Oval Office." Are you a believer that women need to have a more active role in government? Do you want an excuse to buy this sweatshirt so you can wear it all year? Here's your dream costume. To capitalize on the irony, wear the sweatshirt over a 1950s house dress.

If you're a recent grad who's just starting to have to payback your mountain of student debt, this will be the scariest costume you'll ever see. Wear shackles all night to fully illustrate how you are chained to your loans. Feel free to spice it up by carting around fake money that you regularly rip up because, "nothing matters anyway." Finish off your night by weeping in a corner.

If you want to go political for Halloween, why not go all the way? The best part of a birth control Halloween costume is watching men get uncomfortable when you walk into the room.

How To: Cut the cardboard into a circle, and then cut the paper cups in half. Spray paint the bottom of the cups (or any other circular resource you have) alternating colors to look like your birth control. Paint the cardboard backing blue. Then glue the cups on in two circles: one large, one small. Customize to your heart's content.