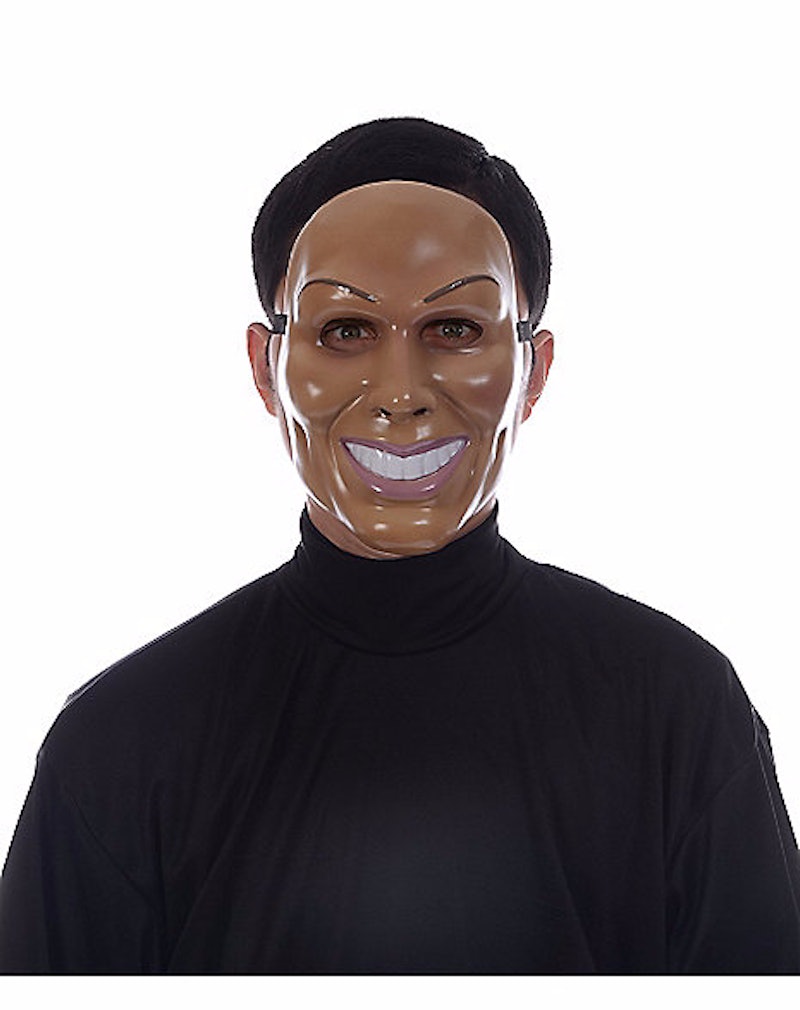 Halloween is just weeks away, and if your plans for the big day include participating in a costume contest hosted by liberal or LGBTQ-friendly pals, look no further than this assorted compilation of terrifying Ted Cruz masks and other Cruz-costume essentials if you seek to win the coveted title of spookiest costume of the night. With his frankly terrifying ideas about gay marriage, women's reproductive rights, foreign policy, and, most of all, fashion, expect a costume in the likeness of the Texas senator to induce shudders among groups of just about all people except maybe those belonging in the rightest of right wings.

I know, I know — Cruz's pronounced nose and that characteristic twinkle in his eye when, somewhere in America, a gay couple is denied a marriage license might seem impossible to replicate. If what you want is simply to dress as a known bigot for Halloween, the easy way out would be a Donald Trump costume — you'd sure have a lot of options. But let's be real here: You want a challenge. And a Trump costume would merely entertain and incite laughter. What you're going for is pure, unadulterated fear. You want people to be truly disturbed by the sight of you — no laughter, nothing. For just one wild night, you want people to see you and literally wonder if you're going to accuse them of being communists. If that sounds like you, here's a step-by-step guide on how to "Cruz" it up.

Ted Cruz might not be as mainstream as his BFF GOP frontrunner Donald Trump, but you'd be surprised how many masks available in his likeness there are out there. You might think you don't need one, but without a mask, even if you leave the house decked out head-to-toe in Cruz's characteristic, awkwardly-fitted suits and cowboy boots, you could literally be mistaken for just about any poorly dressed politician. Cruz's facial features are nothing short of iconic, and unless you get them right, well, you might as well pack it in and put on a bright red "Make America Great Again" cap.

"There's something about him that I find sort of so inauthentic at all moments, so overly performative," MSNBC host Chris Hayes said of Ted Cruz, back in Oct. 2013. Frankly, I get the same vibe from the presidential candidate's folksy outward charm, with his wide, relentless smiles and glossy, almost plastic facial features. There's arguably some physical resemblance between Cruz's face and this "Smiling Man Mask" on SpiritHalloween.com, like the unsettling smile and crazy eyes, but more than anything, consider the metaphoric mask Cruz seems to wear before his supporters, and embrace it for the symbolic meaning it could add to your costume.

People have always likened Cruz to the Munster patriarch. The brow game of this mask is slightly more on point, and the skin tone is arguably a shade warmer, but at least from a distance, anyone could mistake you for Ted Cruz with this Grandpa Munster Mask, available at Amazon, on.

This mask perfectly captures Cruz's reaction to SCOTUS' ruling on marriage equality in June, so you'll probably win the award for best summer throwback, too!

The skin color, teeth, and nose could probably be mistaken for Cruz's from some distance away, but I'm not so sold on the head spikes. Nothing a good Ted Cruz wig couldn't fix, though! The Adam Mask is available here.

If you'd rather hold out on dressing as Cruz and wait a year or two, I have no doubt he'll have accumulated a wrinkle or two, what with all the gay marriages and LGBTQ-friendly societal developments that will likely take place in the next couple years. This will be the perfect Ted Cruz mask for you, then. And if you're looking to get a head start, it's available here.

Pantsuits are to Hillary Clinton what poorly-fitted suit jackets, cringe-worthy Dad jeans, and unfortunate cowboy boots are to Ted Cruz. Here's how to get the look.

Honestly, you could go ahead and order whatever suit jacket you like, as long as you order it a size or two bigger than your actual size. The above suit jacket is available here.

Frankly, I wouldn't be surprised if Cruz owned this exact pair of Wrangler® Men's Premuim Patch # 77 Slim Yuma Jeans, available here. And I swear, I've seen those exact cowboy boots on him, too.

In case for whatever reason you don't believe any presidential candidate or self-respecting man like Ted Cruz, would don a pair of cowboy boots like this...