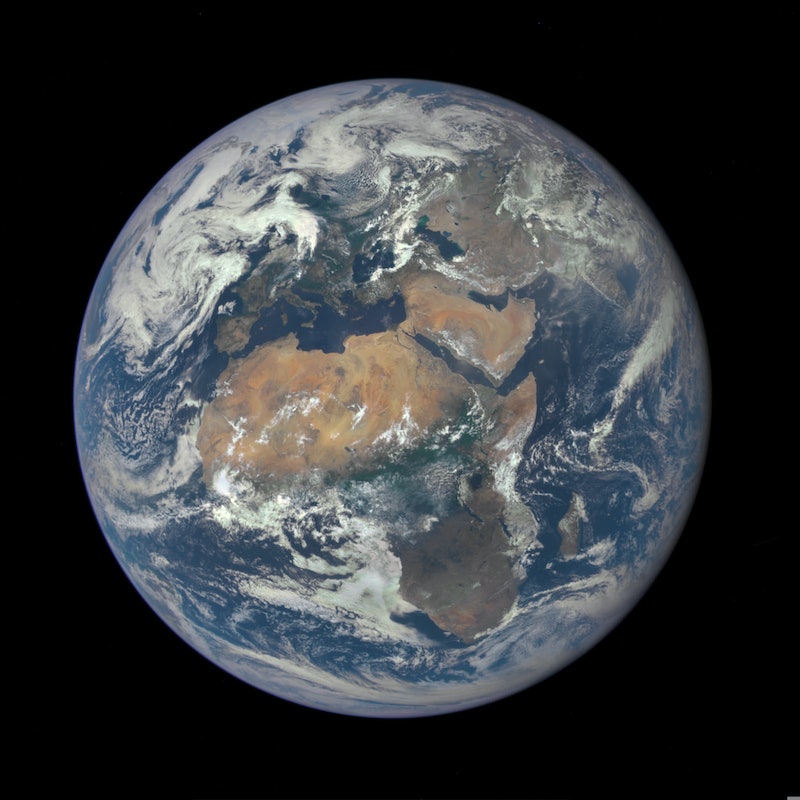 On Monday, Mark Zuckerberg announced on — where else — his Facebook page a new plan to provide Internet to a large swath of sub-Saharan Africa. Teaming with a French satellite company, the tech giant will begin beaming Internet access from space in the second half of 2016. The satellite will reach 14 countries in the region and provide Internet access to rural areas. Africa has less than one percent of the world's broadband connections, despite being the second-most-populous continent. That's one Internet connection per 278 people. Can you even imagine sharing your WiFi with 20 strangers, let alone 278?

"Connectivity changes lives and communities," Zuckerberg says in his post. "We’re going to keep working to connect the entire world — even if that means looking beyond our planet." That comes in the form of the leased AMOS-6 satellite from Israeli company Spacecom. Facebook and its partner Eutelsat will use its entire bandwith to provide Internet connections. Facebook's will be free, while Eutelsat will increase its broadband offerings to businesses and wealthier users.

Facebook's free offerings will be part of its Internet.org project, which currently provides users with free, basic Internet services in 20 countries over mobile networks. In its current iteration, users log on through a smartphone app called "Free Basics by Facebook," and Facebook says that any data used by content within the app is free. If users access the Internet outside of the app, they have to pay their cell phone carrier.

The Internet.org project came under some criticism upon launch for only providing free access to content preselected by Facebook. In other words, Google, Yahoo, or other local competitors couldn't get their skin in the game. Advocacy groups from around the world penned a letter in May accusing the service of endangering an open internet by giving preference to specific content. Internet.org has since opened up to content developers looking to offer services through the platform. Now, 60 services are available providing free health, education, and economic information — such as Malaria No More, which provides information on preventing and treating the disease.

Access to Internet remains out of reach for billions around the globe — more than half of the world's population. Ninety percent of people living in the poorest of countries can't get online, according to a UN report released in September. Some of the lowest levels of Internet penetration are in countries covered by the Facebook venture: Guinea, Somalia, Burundi, and Eritrea. And according to the report, 25 percent fewer women than men have access to the Internet in the developing world.

In rural parts of this region of Africa, mobile networks and landlines are limited, giving satellite an edge. Chris Daniels, VP of Internet.org, said in a statement that satellites are an important way to address "the significant barriers that exist in connecting the people of Africa." Facebook plans to use both satellite and terrestrial networks to reach rural areas. Eutelsat said both communities and individual users will access the net "using affordable, off-the-shelf customer equipment," but it's not clear what the equipment will look like. Zuckerberg said Facebook will work with local partners to help communities get online through the satellite.

This is just the most recent plan to provide Internet to rural areas, whether from Facebook and competitors. The company announced plans in July to build a drone that would fly for 90 days and provide ultra-fast Internet speed. Google also announced in July its Project Loon, which will cover the entire country of Sri Lanka. Loon uses high-altitude balloons to provide service.

In the satellite world, other hotshot players include Telsa Motors and Space X CEO Elon Musk, and Virgin's Richard Branson. Musk hopes to launch 7,000 satellites that would circle the globe in a close orbit, providing fast, reliable Internet to the underserved. In June, he applied for an FCC permit to test the technology. Over on Branson's team, OneWeb, originally backed by Virgin and Qualcomm, raised $500 million to get satellite services up and running by 2019.

Will Facebook posts save the world? Maybe not. But information at the fingertips of millions of people has the possibility to do so. If even a few lives can be saved by a health app, check me in as "feeling impressed."