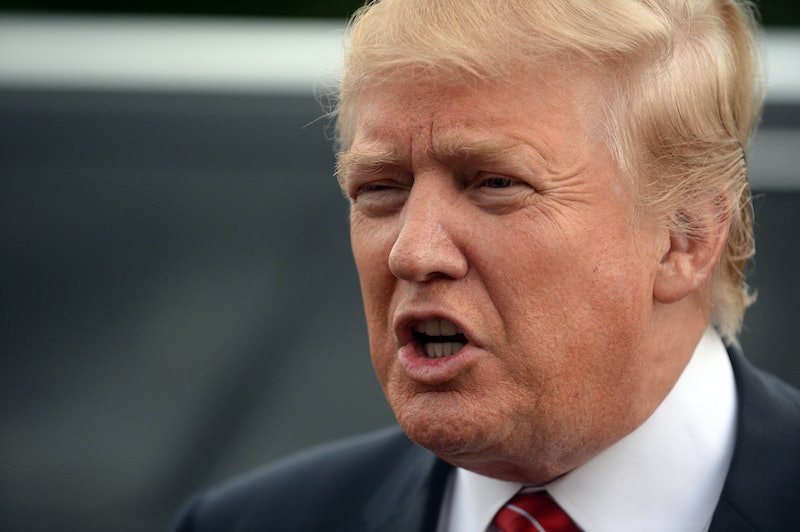 Early Tuesday morning, Donald Trump spoke over the phone with Chris Cuomo of CNN's New Day show. Trump seemed to have had quite a bit of coffee before hopping on the air with Cuomo, as he seemed especially hyped up and verbose. Not that any of this is unusual behavior for Trump whose signature is to be as abrasive and loud as possible, but this in this interview, Trump seemed even more... Trump-like than he usually does. Covering topics from his standing in the polls to the Syrian refugee crisis, Trump's CNN interview was chock full of hyperbole and bizarre promises. And of course, a declaration of winning the Republican nomination.

Trump has of course sat down with other CNN reporters in the recent past. Anderson Cooper interviewed Trump in July, and Cooper somehow managed to take the Donald's absurdities in stride. Cuomo, however, was clearly lacking in patience for Trump's grand standing tactics and constant (and I mean constant) interruptions. Cuomo did what he could to ask questions that might actually elicit direct answers from Trump, but Cuomo was clearly feeling exasperated and annoyed by Trump (and aren't we all) at various points during the interview.

I can't say that I would be able to handle Trump anymore gracefully than Cuomo did (Cooper must have been meditating for hours before interviewing Trump to have stayed that even-keeled...), because Trump's rhetoric is only getting more preposterous as the election season goes on. Here are some of Trump's most ridiculous quotes from his CNN interview with Cuomo.

Discussing the most recent Republican debate (which CNN hosted), Cuomo asked Trump about why he had spoken so little in the last 40 minutes of the debate. Trump fired back that it was because the moderators hadn't asked him any direct questions. Trump also said that he thought, "CNN felt stupid and probably guilty" for how they had treated him during the debate. Cuomo rightly pointed out that Trump generally has no problem speaking without being directly addressed. Touché.

Trump and fellow candidate Marco Rubio have been feuding lately, the latest move in their middle-school inspired clash of the candidates has been a care package that Trump's camp sent to Rubio's. Talking to Cuomo about their scuffles, Trump called Rubio "a total lightweight" and repeatedly called him "weak." Look, I can't stand Marco Rubio and I think most of the legislation he's pushed is garbage, but the man actually has government experience and a record of success (unfortunately). If Rubio is a lightweight, I'm not sure what that makes Trump.

"I'm Not In This To Have Self-Fortification"

I just have to laugh at this one.

"I'm Not A Masochist"

Cuomo asked Trump about when he might think about dropping out of the race, which sent Trump on a rampage about his stance in the polls and his commitment to winning the nomination. Saying he didn't understand why candidates polling at 1 percent would stay in the race, Trump stated he wouldn't do the same because he's "not a masochist." That's probably true, but with all the yelling and interrupting he does I'm pretty sure he's a sadist.

"Nobody Is More Militaristic Than Me"

This quote is more terrifying than anything else. While Trump was contextualizing his military enthusiasm in terms of knowing when to use restraint and when to strike, the idea of Trump as Commander in Chief makes me exceptionally nervous. This interview alone is proof that Trump isn't keen on being diplomatic.

"Assad Is A Bad Guy But You Can Have Worse"