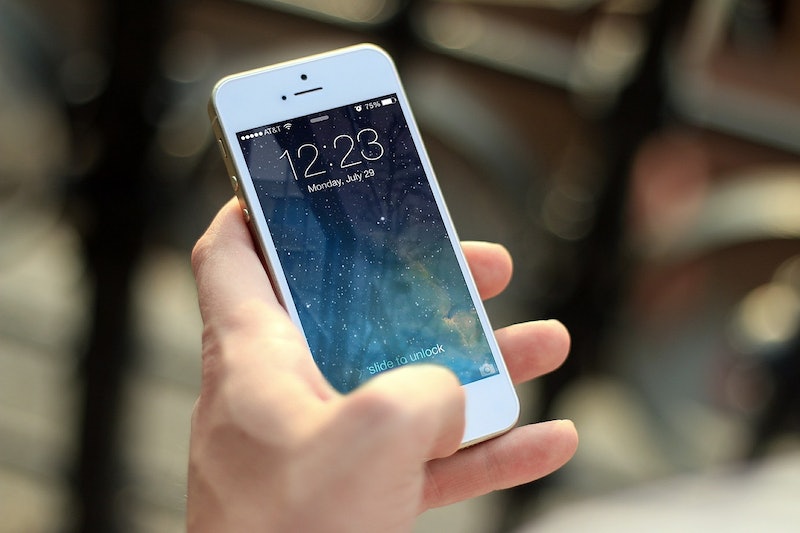 Remember how psyched you were at getting your first 2-megapixel camera phone? Those were the days. Then again, being a teen or tween today probably means you've been blessed with the latest and greatest Android or Apple smartphone (so, yeah, kids today have definitely got us beat there). All this newfound connectivity may seem like a bold sign of progress, but according to a new CNN special that aired Monday, some kids have become obsessed. In fact, according to #Being13: Inside the Secret World of Teens, some teens check social media 100 times a day. (Just think about that for a second.) How come? Researchers say it has a lot to do with their own insecurities about feeling accepted.

The CNN report also delved into the many alarming ways in which teens are increasingly dependent on technology — to the extent that their addiction is negatively affecting both their well-being and development. Some teens said they felt "naked" without their phone, while others admitted they sometimes prioritize checking their social media accounts over eating. (Seriously.) "There's a lot of anxiety about what's going on online, when they're not actually online, so that leads to compulsive checking," explained Robert Faris, a school bullying and youth aggression researcher, and co-author of the study. So to understand their habits, more than 200 students from eight different schools in six states allowed investigators to analyze their Facebook, Instagram, and Twitter data.

During the study, researchers looked at a whopping 150,000 posts over the course of six months. In the end, the team discovered one common thread between the motivation each teen had for looking at social media: popularity. And while the need to feel "popular" and accepted is pretty much par for the course in high school, the fact that it's spiraling out of control and leading to compulsive behaviors and heightened anxiety is something new entirely. The researchers also compiled the most popular reasons why teens went online, which included:

And the more obsessed teens become with social media and technology, the more setbacks researchers say they encounter. It's part of a phenomenon called "phubbing" — aka snubbing someone or skipping a social event in favor of playing with your cell phone. As weird as that may sound, it's actually pretty common. But phubbing is so common it's even led to damaged romantic relationships and even depression. The Baylor University-led study, which was published online in Computers in Human Behavior late last month, only adds to the evidence that we're letting technology monopolize our lives (for better or worse). "Something as common as cellphone use can undermine the bedrock of our happiness – our relationships with our romantic partners," James A. Roberts, Ph.D., a professor of marketing and head author, commented in a statement.

And our phones can influence our lives even when we try not to think about them. If you've ever felt that your phone was ringing or vibrating only to pick it up and see nothing has happened, you're not alone. Yes, these so-called "phantom phone vibrations" are a real thing, and is actually so common that researchers have investigated the causes behind it. One study also published in Computers in Human Behavior reported a whopping 89 percent of undergrads experienced phantom phone vibrations, and even suggested that analyzing people's emotional reactions when getting a text message may help decrease its prevalence. However, the study authors also pointed out that since most young adults are unbothered by experiencing phantom phone vibrations, finding a solution "may be unnecessary."

Though social media technology has brought us some pretty undeniable benefits over the years, it seems one big question continues to hound us: If we're always "connecting" to each other virtually, what will happen to us if we never unplug?

More like this
These Are The Fastest Electric Kettles You Can Buy
By Margeaux Baulch Klein
Flip Phones Are Gen Z's Favorite New Nightlife Accessory
By Maria Santa Poggi
25 Galentine's Day Games To Play On Zoom With Your Long-Distance Besties
By Mia Mercado
Everything You Need To Know About The Samsung Galaxy S23 Ultra’s New Camera
By Alexis Morillo
Get Even More From Bustle — Sign Up For The Newsletter
From hair trends to relationship advice, our daily newsletter has everything you need to sound like a person who’s on TikTok, even if you aren’t.