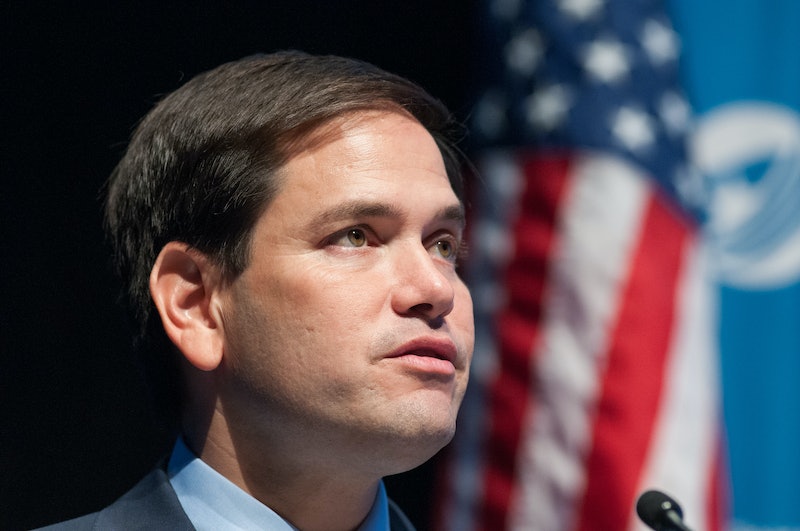 Florida Sen. Marco Rubio may not have been a clear winner in the September debate between Republican presidential hopefuls. But according to the PredictWise betting markets, Rubio now has a 29 percent chance of winning the GOP primary nomination, as compared with the 13 percent chance he had before the debate. His chances of winning the nomination have more than doubled, so Rubio is definitely a candidate to watch.

So what are the reasons for Rubio's increase in odds? The New York Times' Nate Cohn notes that his biggest strength is his "wide appeal." By playing up the fact that he is "the son of a bartender and a maid," Rubio sets himself apart from his Republican competitors — especially former Florida Gov. Jeb Bush, who clearly has a strong family legacy in politics. Even with the improved prediction, Rubio is still slightly behind Bush, whom betting markets predict has a 31 percent chance of winning the nomination. And as Cohn reports, Rubio doesn't have clear in with any particular wing of the Republican party (as Mike Huckabee does, for example, with the Evangelical base).

Still, Rubio's increased odds are noteworthy, especially as Bush's popularity is declining in some polls. Rubio has proven himself a formidable candidate, and the other GOP presidential hopefuls should take him seriously.

1. Rubio Knows How To Ding His Competitors

Aside from the unspoken jab about Bush's family backstory versus his own, Rubio also had the perfect response to former Secretary of State Hillary Clinton's Democratic presidential campaign announcement in April. The day after Clinton announced her intentions, Rubio said to a crowd of supporters, "Just yesterday, a leader from yesterday began a campaign for president by promising to take us back to yesterday. But yesterday is over, and we are never going back."

2. He Turns His Weaknesses Into Strengths

Rubio has said that his campaign will be "a generational choice about what kind of country we will be." Rubio's net worth in 2013 was just over $443,000, which hardly compares to Jeb Bush's $19 to $22 million net worth and Hillary Clinton's $11 million to $53 million net worth. But Rubio has used his background to his advantage, presenting himself as an outsider who can relate to Americans from a variety of backgrounds.

3. He Hasn't Made A Ton Of Political Gaffes

At a campaign event in September, Jeb Bush said he wouldn't give out "free stuff" when he was asked how he would include African-Americans in his presidential and campaign plans. And just last week, Republican presidential hopeful Donald Trump fell under media scrutiny for saying that "these things happen" about the Oregon school shooting. Rubio, by contrast, has impressed many people by making astute observations about foreign policy. He predicted that Vladimir Putin would "fly combat missions in that region, not just targeting ISIS, but in order to prop up Assad," when asked about Syria during the Republican debate last month.

4. Donald Trump Has Resorted To Ad Hominem Attacks Against Him

Trump is no stranger to using personal attacks against his opponents, rather than focusing on political issues. This time, Trump sent Rubio a "care package" that included a case of "Trump Ice Natural Spring Water," two "Make America Great Again" towels, and a note that said, "Since you're always sweating, we thought you could use some water. Enjoy!"

"I've never seen a young guy sweat that much. He's drinking water, water, water. I never saw anything like this with him with the water," Trump said of Rubio after last month's GOP debate. During the debate, Rubio attempted to make light of his Republican State of the Union response in 2013, when he drank from a water bottle while on air giving the speech. But if Trump is attacking Rubio for something unrelated to his campaign, as he has done with Carly Fiorina's appearance, it could be a sign that Trump sees Rubio as a formidable opponent, and so he's resulted to petty insults.

Whatever your opinions are about Marco Rubio's politics, his campaign actions and statements show that he's a politically savvy candidate with a real chance at winning the GOP primary nomination. Don't be surprised if next week's Democratic presidential debate includes at least one mention of Rubio and his 2016 goals.