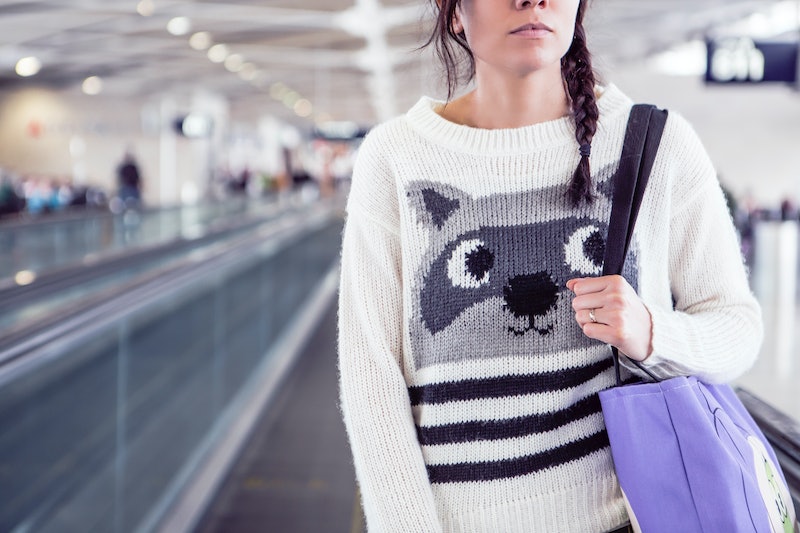 As I prep for the birth of my first child, I've gotten a lot of advice on labor pains, diapering, feeding, sleeping ... and what topics to totally avoid with other parents (unless I want to make some mortal enemies). But here's the problem with all of that: Even if I keep my mouth shut about everything, from vaccinations to sleeping arrangements, it seems like there will always be something for people to criticize about what I chose to do with my baby. Now, a new survey by Yahoo Parenting claims that mom-shaming can start even before baby arrives, and it usually gets worse from there. (So how's that for your depressing news of the day?)

After surveying more than 1,000 American moms between the ages of 25 and 40 in August, Lauren Weinberg, Yahoo’s Vice President of Consumer Insights, said one thing was pretty evident: "There’s so much judgment heaped on moms from others, and from themselves, it makes them ask, ‘Are we being good enough parents?’" For nine percent of the participants, the shaming started during pregnancy — and only got more intense. In the end, 32 percent of moms claimed they felt shamed for their parenting choices when their kid was between three months old and toddlerhood. The number of women who felt judged (rather than straight-up shamed) was significantly higher, too: 90 percent of white moms, 87 percent of Hispanic moms, 81 percent of Asian moms, and 76 percent of black moms said they felt that way.

The most divisive subjects? How to feed the baby, how you're disciplining (such as whether or not to spank), and, of course, whether or not you're going back to work or choosing to stay at home. Nearly half the women surveyed said they felt judged for their child's behavior when they went in public, too. As one mom who participated in the survey shared: "Out in public, when my child acts up, most people stare and even comment on how I discipline the child without even knowing the problem."

But here's the other side of the coin: 91 percent of respondents also admitted that they too are part of the problem, that they are also quietly judging other parents. In fact, one in five women said they'd expressed their criticisms of other parents both "openly and in person." And no, this doesn't just happen among older moms and younger moms. In fact, as one woman in the survey observed, younger moms are more guilty of this than anyone else. "Older moms," on the other hand, tend to better "understand that everybody’s trying to find their own path to parenthood."

So what can we do about it? For one, psychotherapist Andrea Nair suggested taking a look at yourself before passing judgment on someone else. As she told Yahoo, "People who criticize or examine others usually do it when they’re not 100 percent about what they’re doing, or if they feel powerless. It’s a bit of a control maneuver to try and feel better about yourself." Rather than rushing to "correct" or criticize another woman, Nair advised turning that thought into a question, such as "What can I do to be more confident as a parent about this?"

As we (hopefully) learn to go a bit easier on each other, Yahoo Parenting has urged parents to weigh in with the #NoShameParenting hashtag, and share a story or tip about how they're overcoming the guilt.

Even though there will always be subjects that divide moms (and really, all parents), the bottom line is this: We're all united in loving and wanting the best for our kids. So can't we all just back off each other?

And on that note, I leave you with this little video, which went viral earlier this year, and perfectly (and hilariously) demonstrates how we're all in the same 'hood at the end of the day.