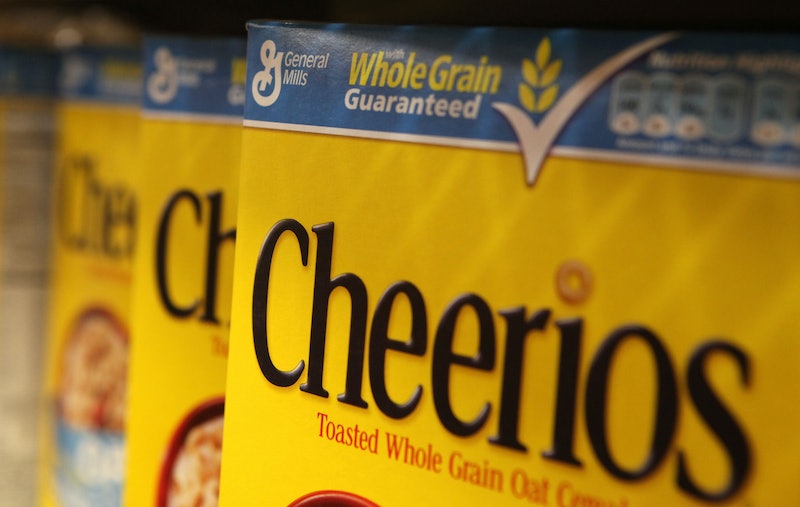 Yesterday brought some pretty big news from one of America's most popular cereal brands: Food manufacturer General Mills has recalled 1.8 million boxes of Cheerios and Honey Nut Cheerios throughout the United States. According to a press release, the cereals, though labeled "gluten-free," may contain trace amounts of gluten due to an incident that occurred in July at the company's Lodi, California facility. Company spokesperson Kirsite Foster wrote in the press release that the voluntary recall came after two separate reports of illness were reported by customers online.

General Mills president Jim Murphy further detailed the mishap that led to the recall in a post on the company's blog Monday, explaining:

Our Lodi production facility lost rail service for a time and our gluten-free oat flour was being off-loaded from rail cars to trucks for delivery to our facility on the dates in question. In an isolated incident involving purely human error, wheat flour was inadvertently introduced into our gluten-free oat flour system at Lodi. That error resulted in an undeclared allergen – wheat – being present in products labeled as gluten free at levels above the FDA gluten-free standard.

According to General Mills, the recall affects only the two cereals mentioned above — original Cheerios and Honey Nut Cheerios. All other Cheerios flavors (including Apple Cinnamon Cheerios, Frosted Cheerios, and MultiGrain Cheerios) remain untainted by wheat. Additionally, all Cheerios and Honey Nut Cheerios manufactured at other facilities or on other dates at Lodi are not believed to have been affected. In his blog post, Murphy also stated that General Mills tested their oat supply and oat flour, and both were found to be gluten-free. Finished products are also being tested, and flour-handling protocols have been updated at all General Mills facilities to prevent another incident.

In the meantime, Foster stated, General Mills is retrieving all affected products from warehouses and stores, and customers with celiac disease or wheat allergies are encouraged to contact General Mills for a refund or replacement at 1-800-775-8370. A full list of the codes for recalled Cheerios can also be found in the General Mills' press release, though the cereal is still safe to consume if you don't have an allergy or insensitivity to wheat or gluten.

News of this latest recall comes just days after General Mills issued another press release warning of a possible listeria contamination in Cascadian Farm Cut Green Beans, which the company also manufactures. Although no illnesses have been reported as of yet, one package of the frozen beans tested positive for the presence of listeria, and General Mills has recalled all packages manufactured on the same day. Check your freezer for 16-ounce bags bearing the "Better If Used By" date of 29JUN2017. The product should be disposed of, and customers should contact Cascadian Farm Consumer Relations at 1-800-624-4123 for a replacement.

This was also the second time this year that the same green beans were recalled, and for the same reason. Back in August, 10-ounce bags of Cascadian Farm green beans bearing the date codes 10APR2016 and 11APR2016 were also recalled for listeria contamination. Luckily, no illnesses were reported in this second green bean recall, either — it appeared to be a strictly precautionary measure.