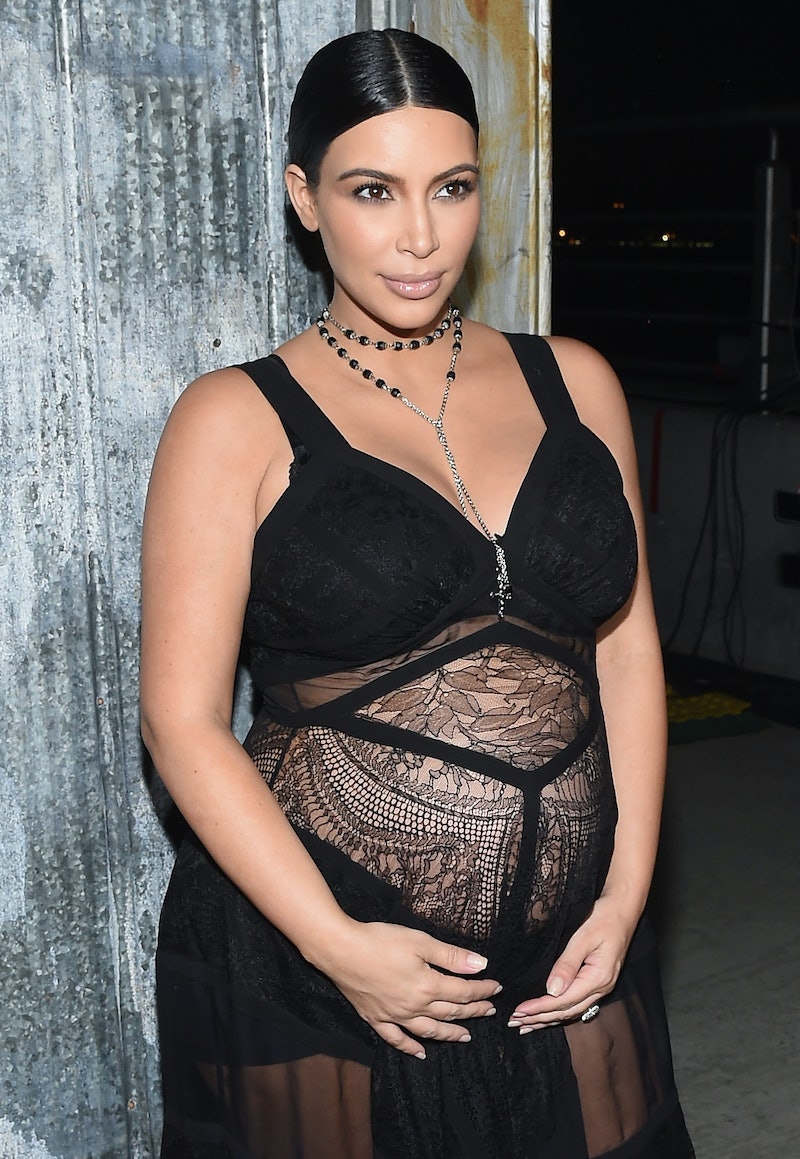 On Monday, on her exclusive (and totally-worth-three-bucks-a-month) blog, Kim Kardashian admitted that being pregnant kind of sucks. And man, did her words light up the Internet. The post on KimKardashianWest.com is trapped behind a paywall, but luckily, People has saved you (and me) the $2.99 subscription by excerpting it. In it, we get this little nugget of wisdom: "I’m gonna keep it real. For me, pregnancy is the worst experience of my life! LOL."

And just like that, the 34-year-old second-time mom sparked yet another conversation about rarely-talked-about parts of pregnancy — you know, the ones we keep inside, for fear of being judged. "I don’t enjoy one moment of it and I don’t understand people who enjoy it," continued Kardashian. "My mom and Kourtney clearly did! More power to them but I just don’t relate!"

Kardashian is media-savvy enough to know that you can't just bag on pregnancy and leave it at that, though. She closed her post with the somewhat cliche (but generally true) statement that it's all worth it once you've got that little munchkin in your arms. (Yeah, yeah, yeah.)

Honestly, it's pretty refreshing to hear someone admit that pregnancy isn't all sunshine and rainbows, and it's important for other women to hear. But when that person's a celeb? Well, it brings even more ears to an important conversation. When you're not enjoying your pregnancy, it can get very lonely — especially if everyone is expecting you to gush about how wonderful and miraculous it all is. Pregnancy has its fair share of amazing moments, sure. It's fun to feel that first kick. It's rad how everyone is always feeding you and giving you their seat. And personally, I really enjoyed freaking people out by making people watch that alien-like lump moving across my belly. But did I enjoy pregnancy, as a whole? Hell, no. I'll admit it. And neither does Kim.

Kardashian isn't the only celebrity who's willing to tell it like it is, though. Wondering who else is in Hollywood is a member of the Screw Pregnancy Club? Turns out, plenty of 'em.

As the mom of three and former Melissa & Joey star told People in 2012: "I hate being pregnant — the lack of energy at the beginning [and] having to change your diet. It’s a huge adjustment and you have to change your whole lifestyle for a few months.”

"As a new mom I'm supposed to go on about how wonderful it was to be pregnant," Pressly told The New Zealand Herald back in 2007. "Well, I don't buy into that. The truth is that I love my baby to bits, but the rest of it sucked. Pregnancy was the biggest killer for me. I hated it — I hated being fat. My hormones were all over the place and I acted like some lunatic, picking fights with my boyfriend over how he made my coffee. On top of that I had this hideous 'pregnancy mask' skin discoloration which completely covered my face. You can normally use creams to disguise it, but not when you're pregnant, so I had to walk around looking like I was horribly disfigured. This may sound arrogant, but I'm used to looking hot I just wanted to cry all the time."

"I'm feeling like crap," Wilkinson admitted to Us Weekly in an interview last year. "I've come to that point of pregnancy where I pretty much give up … I haven't been able to work out because I'm in so much pain. I'm just lying in bed in pain." The petite star said it was due to pelvic issues caused by the baby's position in her stomach. "It's so brutal. She's crushing my pelvic bone. I can't even walk anymore." Now that's a rude baby.

In an April 2014 post on her website, the former reality star wrote: "Pregnancy and me don’t mix. I keep saying to myself 'how can women enjoy this sh*t?!' I’m always on edge because every appointment I find something else that’s crazy and unexpected." Preach, girl!

"I love, like, making a person," Applegate told George Lopez on a 2010 episode of Lopez Tonight. "[But] they don't tell you everything, do they?" the star continued. "'It's the miracle of life, you feel like a flower the whole time.' It's like, bullsh*t, you do not. You feel like a fatass. You are exhausted."

Kelly Clarkson had a particularly difficult pregnancy last year, and wasn't shy about admitting it, either. This past February, she spilled the details to Cheryl Hickey for ET Canada. "Oh girl, I was like, hospitalized," Clarkson said. "It was bad. I mean, projectile for like, 20 times a day. Like, for real. I'm not exaggerating. Like, it was the worst."

Sure, some pregnancies can be a breeze, but let's be honest: Most are far from fun. And guess what? It's totally OK to hate every single minute of it. It doesn't make you a bad mom. It just makes you human.