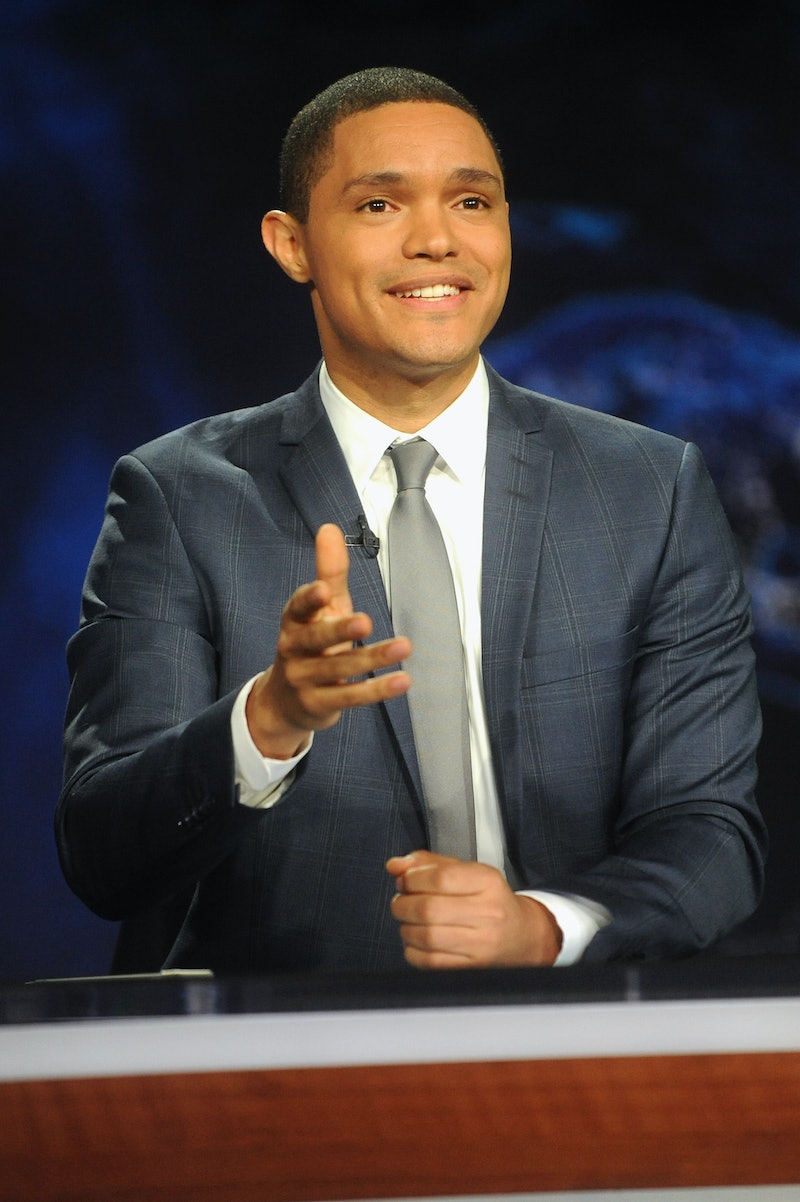 Few issues nowadays sit on the emotionally-charged ragged edge of American politics quite like gun control and abortion rights. And on Monday, nascent Daily Show host Trevor Noah showed his viewers one potential intersection of these issues: If only elected Republicans were quite as vocally outraged by the former as they are the latter. So if you've got a few minutes to spare, why not watch Noah take on abortion and gun control. Because let's be honest, you're still kind of wondering if the new Daily Show will live up to the old one, right?

Noah started off by highlighting the recent slew of undercover videos targeting Planned Parenthood, released by the anti-abortion group the Center for Medical Progress. It's a strange name for an organization apparently aiming to demonize fetal tissue donation, but there you go. Noah joked that the videos "were made by, I assume, some sort of pro-life James Bond." And Noah ultimately conceded that a man of Bond's ... lascivious character would probably not be much of an anti-abortion crusader. But that's when the routine segued to our modern politics, and got just a bit more serious.

After addressing Carly Fiorina's eye-popping misrepresentation of the contents of the Planned Parenthood videos during a CNN GOP presidential debate, clips played detailing the great lengths that Republican-led state legislatures have gone to crack down on women's access to abortion. These include so-called TRAP laws (targeted regulation of abortion providers), which require clinics to have admitting privileges to a local hospital, or worse yet, mandating medically unnecessary transvaginal ultrasounds before allowing a woman to receive an abortion.

The whole thing was enough to make Noah a little startled, because there's another major issue in the news right now that the GOP isn't quite so pro-lifey about: the scourge of gun violence in America. After highlighting Jeb Bush's much-maligned response to the Umpqua Community College shooting — "stuff happens, there's always a crisis" — Noah observed how different the gun debate would be if the Republicans applied that same tone of righteous indignation and sanctity of life above all else. (There was also a joke about The Rock in there, lest the GIF below look a wee bit confusing.)

Noah pulled quotes on abortion from Bush and Fiorina to drive the point home, wondering "what other issue could appeal to those who love life ... imagine if we could bring more of that pro-life passion to being, well, pro-life?"

Bush: I am completely pro-life, and I believe that we should have a culture of life, it's informed by my faith, from beginning to end.

Fiorina: I am really tired of being called extreme on this issue ... Every life is filled with potential.

Going a step further, Noah dubbed over the end of a Rick Perry line on his anti-abortion values to illustrate the apparent synchronicity between the issues, although truth be told, his vocal impressions could use some work — OK, a lot.

Perry: My work is behind me to make sure that innocent is protected.

Noah: ... and obviously, you can't let someone get out of a background check just because they buy a gun at a show rather than a store. That's just idiotic.

As Noah joked, you've got to hand it to Perry — even after ditching the thick-rimmed campaign trail glasses, he can still sound smart, given a little rewrite here and there.

All in all, the predictable nervous energy aside — Noah's only had a week so far to get comfortable in this new gig, after all — it's was a pretty good approximation of the kind of pointed political criticism that Daily Show viewers have been accustomed to for so many years. Here's hoping that he'll continue to grow into the anchor's chair comfortably, although hopefully with a few less hugely intractable, utterly depressing issues to make fun of.