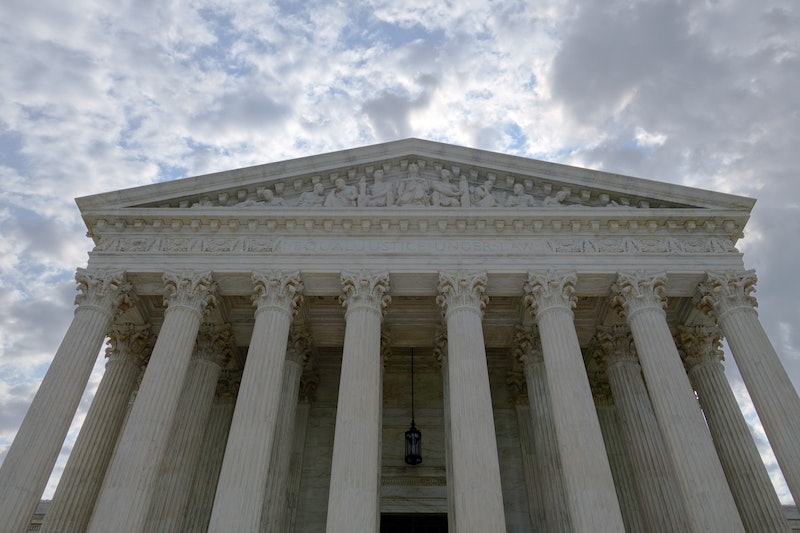 The Supreme Court justices returned to work Monday, commencing their 2015 session after a summer off. Previously, they had legalized gay marriage, temporarily saved some abortion clinics in Texas, and shot down President Obama's emissions limitations plan. Now that they're back in session, SCOTUS is likely to have more highly visible and hotly contested cases on its hands in light of everything that happened over the summer, particularly regarding Planned Parenthood and moves from the GOP to severely restrict abortion access in certain states. With five conservative justices outnumbering the four left-leaning members of the Supreme Court, the question that anyone deeply invested in either side of the abortion argument is how the Supreme Court will rule on abortion measures if an abortion case reaches their bench this term.

Though there is a pretty clear ideological split between the conservatives and liberals on the court, two conservatives voted with the liberals in a couple of key cases in their last term. Justice Kennedy and Justice Roberts, who are both conservative, voted in favor of the legalization of same-sex marriage. Further, the big abortion ruling over the summer was the Court's decision to allow Texas abortion clinics to remain open while the Court decided if they would hear an appeal. In this decision, Justice Kennedy again voted with the liberals.

There's decent precedent for Kennedy voting along liberal lines in cases related to social justice issues, but this most recent abortion decision was only a stay, not something that would dictate legislation. Some judges are almost certain to vote conservative or liberal, but that doesn't mean we can easily predict what could happen with a ruling on Roe v. Wade, mostly because of certain inconsistencies in Kennedy's recent record. Based on previous decisions and other statements from the Justices, here is how a Roe v. Wade ruling would be likely to play out.

(There are myriad issues related to abortion that the Court has heard in the past and potentially could hear during the 2015 term. This synopsis will specifically discuss a case the Court may be presented with that pertains to efficient and legal abortion access (e.g. the closing of abortion clinics)).

During his Senate Judiciary hearing in 2006, Alito stated that he did not consider Roe v. Wade to be "settled law," but said it was worthy of respect while it is on the books. In 1985, Alito spoke directly about a desire to overturn Roe in a memo about a Pennsylvania case pertaining to abortion vis-a-vis a woman's right to privacy. Alito wrote, "We should make clear that we disagree with Roe v. Wade and would welcome the opportunity to brief the issue of whether, and if so to what extent, that decision should be overruled." He also voted against keeping nearly all of Texas' abortion clinics open this past summer.

Alito is almost certain to vote in favor of repealing or weakening Roe.

Ginsburg has always been a very vocal advocate for reproductive rights, and has consistently voted in favor of maintaining abortion rights. Although she is critical of the logic behind the original Roe ruling (which she argued was all about doctors' rights, and not about women's rights (good point, RBG)), Ginsburg supports the right to choose to have an abortion, and has always voted as such.

Ginsburg is almost certain to vote in favor of upholding the right to choose.

In 2002, Breyer wrote an opinion in support of partial-birth abortions, and has called Roe "settled law." Breyer has consistently voted along liberal lines, and has been vocal about his support for reproductive rights and abortion access.

Breyer is almost certain to vote in favor of upholding the right to choose.

Kagan is a liberal justice who stands in support of reproductive rights. She was one of the justices who voted in favor of keeping Texas abortion clinics open over the summer, and has never spoken out publicly against Roe or abortion rights.

Kagan is likely to vote in favor of upholding the right to choose.

Kennedy is the main question mark on the Court when it comes to abortion. He has consistently voted in favor of upholding Roe in the past, particularly in 1992, when he co-wrote an opinion stating that we all have a right to define the "mystery of life" in our own terms.

Kennedy is somewhat likely to vote in favor upholding the right to choose.

Appointed by President George W. Bush in 2005, Roberts has consistently aligned himself with conservative ideology on social issues. However, Roberts has stated that Roe is settled law, and deserves respect as such. He dodged questions about abortion during his Senate confirmation hearing, and voted against keeping Texas abortion clinics open in June.

Roberts will possibly vote in favor of repealing or weakening Roe.

Scalia has been outspoken against abortion rights for as long as he's been on the Court. Always taking a very literal interpretation of what was intended by the founding fathers, Scalia has argued that because the framers of the Constitution did not include the right to abortion access, that the Supreme Court should also not allow for it.

Scalia is almost certain to vote in favor of repealing or weakening Roe.

During her confirmation hearing in 2009, Sotomayor stated that the Court's two landmark cases on abortion (Roe v. Wade and Planned Parenthood v. Casey) were "settled precedent." She joined the other liberals in the Court and voted to keep Texas abortion clinics open over the summer.

Sotomayor is almost certain to vote in favor of upholding the right to choose.

In a separate opinion issued by Thomas in 2007 regarding Gonzales v. Carhart and Gonzales v. Planned Parenthood Federation of America, Thomas wrote, "I write separately to reiterate my view that the Court’s abortion jurisprudence, including Casey and Roe has no basis in the Constitution." However, Thomas is in staunch favor of states' rights, and so depending on the way an anti-Roe case is presented, Thomas just might vote outside of conservative ideology, though that seems unlikely, given his overall feelings on the lack of a constitutional basis for Roe.

Thomas is very likely to vote in favor of repealing or weakening Roe.

Of course, how the justices vote will have much to do with the context of an argument that is presented, and how they interpret the Constitution in the specific situation. Justices are generally careful not to take a stance on hot-button issues that are general and not related to a specific case, but rulings, memos, and other opinions are pretty telling. If an abortion access issue comes before this Court, it seems most likely that Kennedy will be the "swing vote" that could tip the scale either way. Given that it all rides on one vote, it's a precarious and tense possibility for abortion rights advocates.