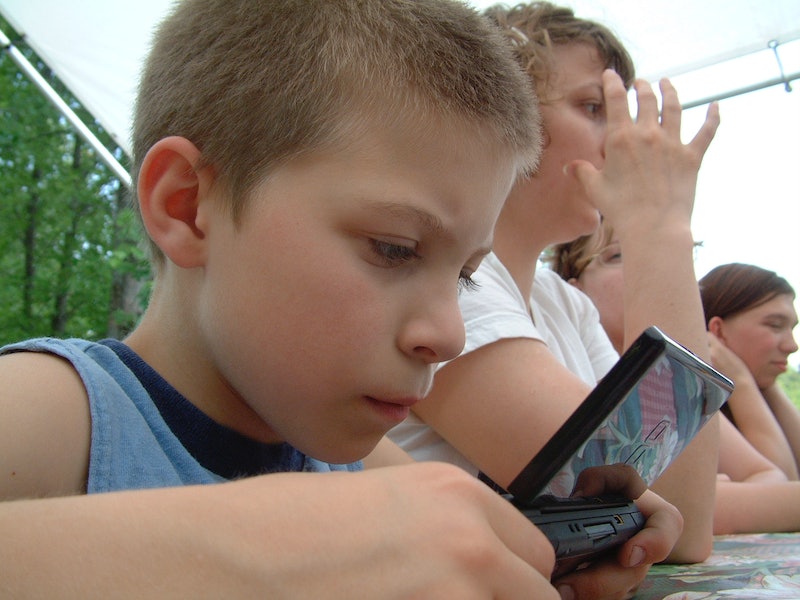 Until recently, the American Academy of Pediatrics had recommended that children under two shouldn't watch television or use any electronic devices, and screen time for kids over two should be limited to two hours per day. In theory, that line-in-the-sand recommendation may not sound hard to abide by — but if you've ever tried to nurse a baby while keeping your toddler from tearing the house apart, then you know just how amazingly handy an iPad can be. Lucky for you, the American Academy of Pediatrics released new screen time guidelines for kids last week; and let me just say, they make it a whole lot easier to parent in 2015.

The original guidelines, drafted in 2011, were outlined in the policy statement Media Use by Children Younger Than Two Years. But, my, how times have changed drastically in the last four years. We all have smartphones in our hands now, educational apps are a booming business, and elementary schools are integrating iPads into the classrooms. And so, came a long-awaited update from the AAP last week:

Today, more than 30 percent of U.S. children first play with a mobile device when they still are in diapers, according to Common Sense Media. Furthermore, almost 75 percent of 13- to 17-year-olds have smartphones, and 24% admit using their phones almost constantly, according to the Pew Research Center.

In a world where "screen time" is becoming simply "time," our policies must evolve or become obsolete. The public needs to know that the Academy’s advice is science-driven, not based merely on the precautionary principle.

With that in mind, the AAP convened a two symposium of researchers, educators, and pediatricians in May to discuss whether new guidelines were in order, and what they should be.

Screen Or No Screen, Parenting Should Be The Same

The conclusion the researchers drew was that the digital world is just an extension of the real world, and is inherently neither good nor bad. What matters more is how kids are using electronic devices, not how often. Parents whose children use computers, tablets, or other electronic devices are encouraged to set limits and play along with children just as they would with any other activity.

Your iPhone Doesn't Teach Your Baby Anything; You Do

Staring at an app or a video won't teach a baby to talk, read, or become the next Steve Jobs. (Unfortunately.) No matter how "interactive" a virtual activity may seem, it's no substitute for human interaction — aka the best way for babies and toddlers to learn.

Not All Apps Are Created Equally

An hour learning about history or music on a tablet is better than ten minutes of Angry Birds. Don't take apps at face value just because they call themselves educational; check it out for yourself. The AAP also recommends checking Common Sense Media for reviews.

Yes, Your Baby Will Be On Instagram One Day, And That's OK

Believe it or not, the AAP says in its release that "[o]nline relationships are integral to adolescent development. Social media can support identity formation." So, yes, they want your kid on Facebook — but not just yet! These guidelines are for teens. Just something to keep in mind for the future.

It's Still Important To Have Screen-Free Time

So electronics aren't the devil, after all. But that doesn't mean our kids should be glued to screens all day. Make sure they're getting plenty of screen-free playtime in, and always keep family dinner unplugged.