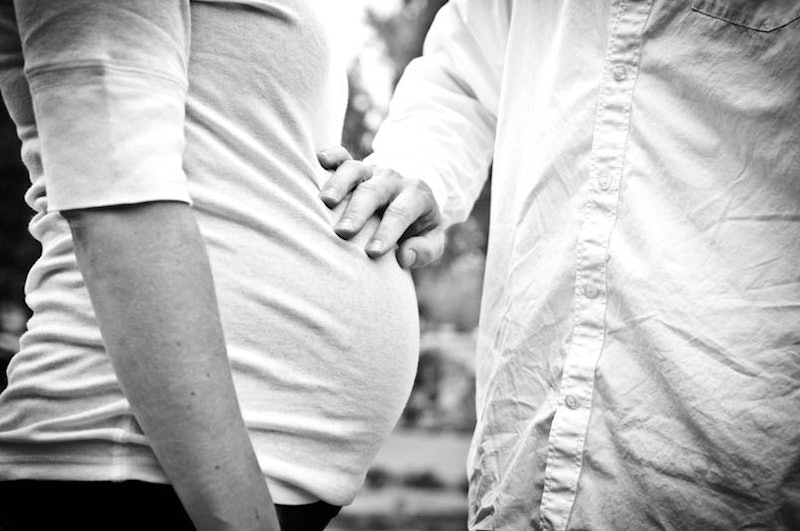 Expecting your first child is one of those rare times in life when you absolutely know for sure that everything is about to change forever — which is both thrilling and terrifying. You know about the "thrilling" part, thanks to pictures of cupcake-filled baby showers and baby-themed Pinterest boards dominated by designer nurseries. But that heady period of time that comes while waiting to welcome your tiny human into the world isn't always as fun and pretty as Pinterest makes it seem, for both moms and dads. In fact, expectant dads suffer their own kind of prenatal depression, according to a McGill University study — we just don't talk about it.

That's right: The crazy hormonal shifts during pregnancy aren't just reserved for moms-to-be during those nine — oh, who are we kidding, 10 — long months. According to study authors, 13.3 percent of expectant fathers experienced elevated levels of depressive symptoms during their partner's pregnancy. That stat's pretty eye-opening, considering how close it is to what women go through: The American Pregnancy Association reports that between 14 and 23 percent of women experience prenatal depression at some point during their pregnancy.

Senior author Dr. Deborah Da Costa said the results are even more concerning since people who experience prenatal depression have a greater chance of developing postnatal depression, too. But the upside, she explained, is that identifying the symptoms early can lead to earlier treatment: "Teaching fathers and screening for this early on, can be beneficial in terms of decreasing the risk or the continuation of depression postpartum."

Although there's no denying that expectant parents already have a lot on their plates, it's well worth it to do whatever possible to prevent or cope with depression — especially when you have a baby arriving soon. As Dr. Da Costa said of a father's depression, "It has an impact on not only him and his quality of life, but it has an impact on his interactions with his partner, and eventually on the child."

With that said, here are some things to know.

Why Your Partner May Be At Risk

He's not getting enough sleep. One of the main habits that put the men in the study at a higher risk of depression was their lack of shut-eye. Dads-to-be should take that as yet another excuse to hit the snooze button as often as possible before baby arrives. (It's neither easy nor advisable to do that when you have a crying baby.)

You're suffering, too. As psychotherapist Dr. Will Courtenay once told Parents magazine, the depression risk among men goes way up when their spouse has the baby blues. In fact, Dr. Courtenay shared that half of all men whose partners have postpartum depression develop it themselves.

Traditional depression risk factors also apply. Those include a having a family history of depression, having a chronic disease or mental health disorder, not having much social support and experiencing a major life change. (Although, really, what's more of a "major life change" than expecting a new baby?)

When Dads Should Talk To Their Doctors

While preparing for the arrival of a new baby, it's still important — probably more than ever before — to stay tuned into your emotions. Similar to general depression, prenatal depression in men is characterized by a loss of interest in otherwise enjoyable activities, weight loss or gain, changes in sleep patterns, and a sense of worthlessness. Other signs of depression that Dr. Courtenay shared are more common among men than women, including anger and agitation, as well as physiological symptoms like shortness of breath, heart palpitations, or even panic attacks.

How Men Can Deal With Their Depression

The good news about any kind of depression is that it's treatable. And, in the case of antenatal depression, men have an advantage over female peers in that they have the full arsenal of antidepressant medications as options. Beyond meds, the Baby Centre medical advisory board suggests depressed dads-to-be cope by getting more involved with their partner's pregnancy. By learning more about what is to come, guys can alleviate the stress of (some) unknowns.

Other good practices include exercising, eating well, and simply talking through your feelings. Unfortunately, that last suggestion seems to be difficult for men, with 35 percent of the men from the study saying they felt too uncomfortable to talk to anyone else. But, as Dr. Da Costa said, "Pregnancy in women is looked at as a teachable moment. ... I think that in my experience, as well as with what other studies have shown, pregnancy can be a teachable moment for men too." Translation: If there was ever a time to put the fear of talking aside, it's when preparing for a new baby.

More like this
This Psychological Effect Might Be Keeping You From Hitting Your Goals
By Lexi Inks
Chelsea Clinton On The Best Advice She Ever Got From Her Mom
By Brianna Kovan
Are Quality Time & Gift-Receiving Love Languages Compatible?
By Lexi Inks
10 Ways To Be More Empathetic To Your Partner
By Raven Ishak and Lexi Inks
Get Even More From Bustle — Sign Up For The Newsletter