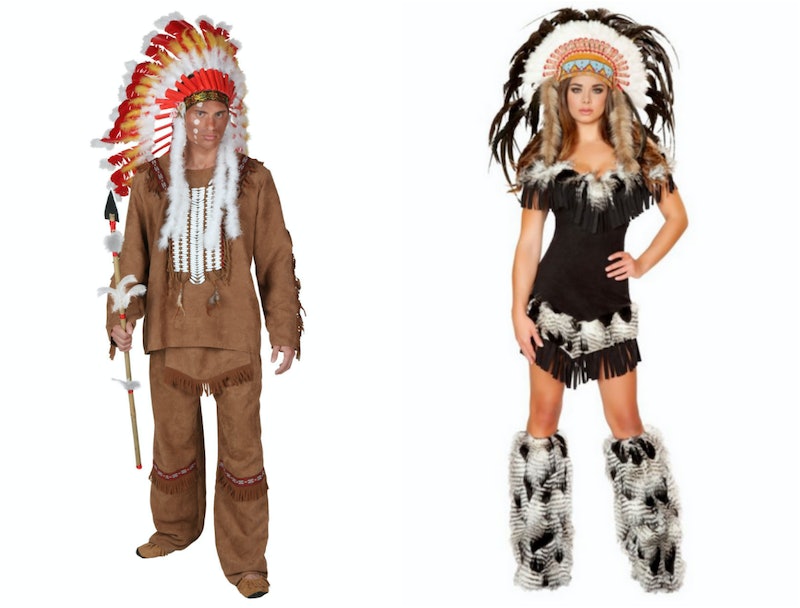 Halloween should be a time of casual celebration, caramel apples, and lots of unnecessarily spooky adult beverages — not a time for controversy. Unfortunately, it seems that every year someone decides to make things awkward by showing up to a friend’s party wearing a racist or sexist Halloween costume and then subsequently getting angry at all the flak they’re receiving from those who actually, you know, understand that the costume is offensive. Worse still, with widening acceptance of "non-PC" attitudes (thanks, Donald Trump), that sort of behavior has seemingly become the norm.

In 2012, for example, a Chi Omega sorority chapter at Penn State came under heavy fire after a racially offensive photo taken at a party around Halloween was posted to Tumblr. In the image, the sorority sisters were dressed in ponchos, sombreros, and fake mustaches, holding offensive signs that read, "Will mow lawn for weed and beer," and "I don't cut grass, I smoke it." After the photo went viral, the backlash from the public and the media were so intense that the sorority was forced to apologize — although at least a few defended the group's actions under the umbrella of the Constitution.

"The students in the photo are within their First Amendment rights to express themselves in this way, although we are certainly appalled that they would display this level of insensitivity and lack of judgment," said Penn State public relations director Lisa Powers, in a statement to CNN. "Because the right of free expression is guaranteed under the Constitution - for both behaviors we disagree with or for those that we support — we are approaching this as a teachable moment."

But the incident certainly wasn't an outlier by any stretch of the imagination. Over the years, that same theme of insensitivity has cropped up time and again, whether within the walls of fraternity houses or on the red carpet.

In 2013, Dancing with the Stars pro Julianne Hough was criticized for showing up to a celeb-filled Halloween soiree dressed up in black-face as Suzanne "Crazy Eyes" Warren, a black female inmate from the popular Netflix show Orange is the New Black. When confronted with the photos, however, many dismissed Hough's actions as inoffensive, with singer Tamar Braxton (who is herself black) claiming in a VH1 interview, "You're drunk by the time you figure out who people are — it's not that serious." Whether or not Hough's costume was offensive to Braxton was beside the point. Certainly, one singer didn't speak for the masses, after all.

If you're hoping to avoid an incident like the aforementioned, and you're still unsure whether the costume you've chosen or are hoping to wear this year are offensive, racist, or sexist (hopefully that's pretty self-explanatory by this point), refer to the primer below to double check.

There's no excuse for this one. Given the fact that Native Americans are routinely killed, assaulted, and otherwise discriminated against at an alarming rate with very little public reaction, there should be no question as to whether or not you should put that nylon "Sexy Pocahontas" costume back on the rack.

Okay, first of all, it's not "Eskimo," it's "Inuit" or "Native Alaskan," for future reference. Second, this sort of get-up isn't just culturally insensitive, it's sort of tone-deaf given recent events. Hearing the frustrations of northern indigenous tribes, President Obama decided to change the name of Mt. McKinley back to its original Native Alaskan moniker, Denali, in August this year — the least you can do is hop aboard the progress train with him.

Neither of these are funny. In fact both of these costumes imply an overwrought stereotype that sexualizes and fetishizes Asian women (who, apparently, are all Chinese takeout or Japanese Geisha). Also of note: the costume on the right is actually titled "Sexy Asian Dragon Lady." Gross.

Do we really need to talk about the fact that men and women of Middle Eastern descent are discriminated against at unprecedented levels in the United States already? No? Good.

By all means, please feel free to dress up as a wartime pin-up girl if you so desire, but there's a huge difference between emulating one of World War II's most adorable, rouge-cheeked poster models and sexing-up the real life professions of hardworking police, SWAT, and military members who genuinely put their lives on the line every single day. And in case you're wondering what the men's version of these costumes are like, trust me — they're not nearly as bad.

This one is tricky. I get it — the whole "sexy nurse" cliche has become synonymous with Halloween — but that doesn't mean it's okay. Worse, with The View host Joy Behar's insensitive comments about nurses still lingering in the air (Behar notoriously joked of a Miss America contestant whose talent was talking about her job as a nurse, "Why is she holding a doctor's stethoscope?"), now might not be the best time to trivialize the difficult job nurses actually do.

This might come as a surprise to you, but strippers and sex workers have feelings too. In case that wasn't clear enough for you, this costume is wildly inappropriate (and not in a funny way) for obvious reasons, least of which is the fact that it's very clearly body-shaming.

The Worst Of The Worst

These two aren't necessarily sexist or racist, but come on. "Anna Rexia" and a blind referee? Didn't think I'd have to spell this one out, but please don't make light of disabilities or diseases this Halloween.

The "There's No Reason For This To Be Sexy" Costumes

Okay, I get it. You want to be a sexy pirate. Go ahead and be a sexy pirate, no one's stopping you. But sometimes you come across a Halloween costume that was sexed-up for no reason — I mean, other than the fact that it's a woman's costume, so it just has to be sexy, right? Wrong. Please do yourselves a favor and remind the thoughtless costume designers out there that there's absolutely no reason to make a Minion sexy.

I mean, we're still considering this an animal rights tragedy, right? Why is "Sexy Cecil" a thing? Did these costume makers think, "Women love three things: fur, being sexy, and dead lions," and just go to town? I'm not even sure whether this is sexist, inappropriate, or inhumane — all I know is that you definitely shouldn't be purchasing anything with the terms "sexy" and "Cecil the Lion" in the description.

Anything That Involves Black-Face

...Or "black culture," for that matter. Do you really want to end up in the paper like Rachel Dolezal? What year is it?

Anything That Makes A Joke Out Of Domestic Violence

Joking about domestic violence is bad enough. Making light of women and men who have been abused by dressing up as them is taking things to a whole new, disgusting level. Before you decide to start assembling a "hilarious" Chris Brown/Rihanna or Ray Rice/Janay Rice couple's costume please take a moment to remember that you're trivializing someone else's horrific experience.

Guys, this isn't cool, and it's definitely not going to win you any points with the ladies — especially not when the entire country seems hell-bent on demonizing women's sexual and reproductive choices.

That said, if you're still not sure what you're going as for Halloween, kick back and watch this for some more inspiration on what not to do...