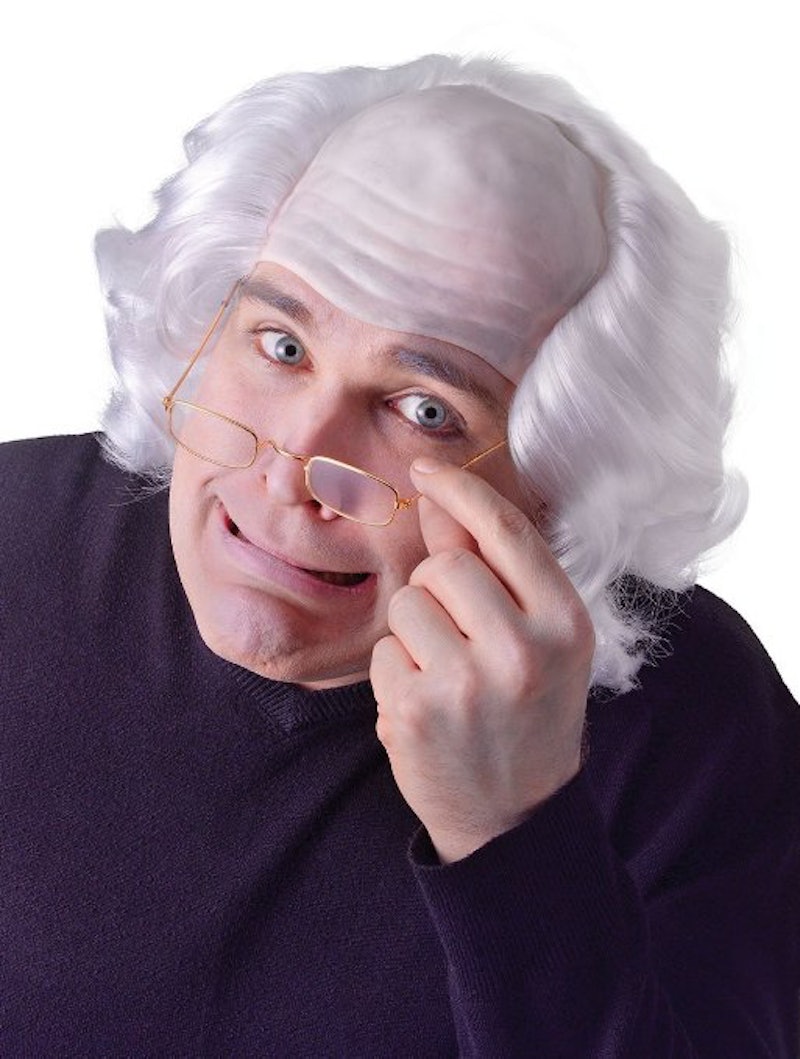 Bernie Sanders wants to be a candidate for the masses, but this Halloween, you'll want to be one of a kind. With all the drama of this campaign season, there are already more than a few political costumes on the market. But if you think Donald Trump and Hillary Clinton are overrated — at least as in terms of costumes — then start prepping your very own, totally clever Sanders costume for Halloween to show off how you're "feeling the Bern."

First things first: If you're going to dress like Sanders, you've also got to pull off his persona. He's known for hating on Wall Street, cheering for unionized labor, and identifying as a Democratic socialist. Before you walk into any party dressed like Sanders himself, you've got to learn his lingo. You've got to make big statements that sometimes use clichés and always put the 1 percent in its place. Here's a quote to get you started:

Once you can talk the talk, it's time to look the look. No Sanders costume is complete without his signature wily hair. To get his look, try a wig like this one from Amazon:

Hopefully Sanders isn't offended by the "old man" reference, but I have a feeling he'd like that it's a generic wig and not a fancy corporate "Bernie Sanders" wig. To take your Sanders-inspired hair game to the next level, tease it slightly to make it look a little tangled and rough. Once you've got the persona and the hair ready to go, it's time to pick which Bern you'll be.

Step 1: Grab your wig and add a simple, light blue button-down shirt to the ensemble.

Yes, this one is almost $50. No, Sanders would not want you to spend a lot of money on your costume. But think of this as an investment in your career: Once Halloween is over, you can wear this to your next job interview. (Just don't tell the hiring manager that you bought the shirt for Halloween.) For a more accurate costume, roll up the sleeves on your shirt, as shown in the store's photo and in Sanders' TIME magazine photo. Also, don't forget to throw a pen in the pocket!

Consider these another investment in your future. You might even be able to reach into the depths of your closet and find that pair of dark slacks you wear to job interviews and networking events. Add a black belt, throw your hands on your hips, and you're almost ready to go!

Step 3: To complete the magazine look, you'll need a headline. On paper or poster board, write or type the headline to Sanders' TIME magazine cover: "Bernie. Socialize this , America." For added accuracy, the "Bernie" should be in white text and the rest should be in black text. You can attach these to your shirt with a safety pin, or you can attach them to a Popsicle stick and hold them in front of you.

From time to time, Sanders releases short videos called "Bernie Briefs" that outline his position on certain issues. These are prime Halloween content.

Step 1: Start with your wig and blue button-down shirt. Add a blazer that matches... because Sanders would. Try this one from Target:

Step 2: Add the briefs. Pick a fun design of Sanders-branded boxers/briefs/whatever you're feeling, like these from Zazzle:

Note: Particularly if you're going with one of the more brief-y designs, I'd suggest leggings underneath to avoid the stereotypical "sexy" Halloween costume. But it's your Halloween, so you do you.

Step 1: You know the drill by now. Start with your wig, blue button-down shirt (sleeves rolled up and all), and dress pants. Then, complete the look with a protest sign. You can make your own sign very easily with some poster board and a ruler: Write an issue-oriented message on the poster board (Try something like, "I stand for unions," or, "I support the 99 percent.") and tape or glue it to the ruler.

Step 2: Add the attitude. Throughout the night, repeat your activist message over and over — during conversations, during awkward silences, etc.

This is the ultimate Sanders-related play on words. After all, he's asking voters to "feel the Bern." On Halloween night, though, you can put the "burn" in Bernie to by showing just how fiery your passion is for your favorite candidate.

Step 1: This costume offers a lot of creative freedom, but I'd suggest sticking with the traditional wig, blue button-down shirt, and dress pants. If you'd rather switch it up, you can go with this official campaign T-shirt courtesy of Sanders' online store:

Step 2: Here's where more creative freedom comes in. You'll want to add symbols of fire to your look. I'm going to suggest these flame-like gloves from Etsy. They're not very subtle, but they are very burn-ie.

If you didn't skip over the previous costume idea, then you probably know where this is going. This costume is particularly nice for people in cold weather climates.

Step 1: Get your base-Bernie going with your wig, blue button-down shirt, and dress pants (or swap this ensemble for a campaign T-shirt and jeans). Then, bundle up! Get it? Because you're so excited for Burrrrrrr-nie, you've got chills. You could even go all-out with one of these unofficial Sanders scarves from CafePress:

Step 2: The more layers, the better — so keep piling winter clothes and accessories on! If you really want to take it to the next level, team up with someone who can be your warm counterpart, No. 5 Burn-ie Sanders.

Here's another couple idea: Candidate Sanders taking a selfie with a supporter (who is, undoubtedly, "feeling the Bern"). Grab a partner, preferably your partner, and get to costuming.

Step 1: Decide who is who. Whoever will play Sanders should throw on the all-purpose wig, blue button-down, and dress pants. The selfie-taker can stick with a campaign T-shirt and jeans.

Step 2: Bring a phone along with you to your Halloween celebrations to take selfies. A selfie stick is optional. Hashtagging them with #FeeltheBern is mandatory.

7. Rosie The Riveter Feels The Bern

Step 1: No wig, blue button-down, and dress pants this time! Here, you'll need a denim button-down (aka chambray) shirt and a red bandana. Roll the sleeves up on the chambray shirt and tie the bandana around your head like a headband. If you need some inspiration, channel your inner Beyoncé:

Step 2: Add a Bernie Sanders hat. Order this crucial accessory soon to ensure that it will get to you by Halloween.

If you're going to "feel the Bern" on Halloween, start searching for the perfect blue button-down and master the art of teasing your white wig now. No matter which clever costume or creative variation you choose, let's all agree that they're a safer bet than the unfortunate sexy Donald Trump costume.